The election workers Trump slandered are the foundation of US democracy 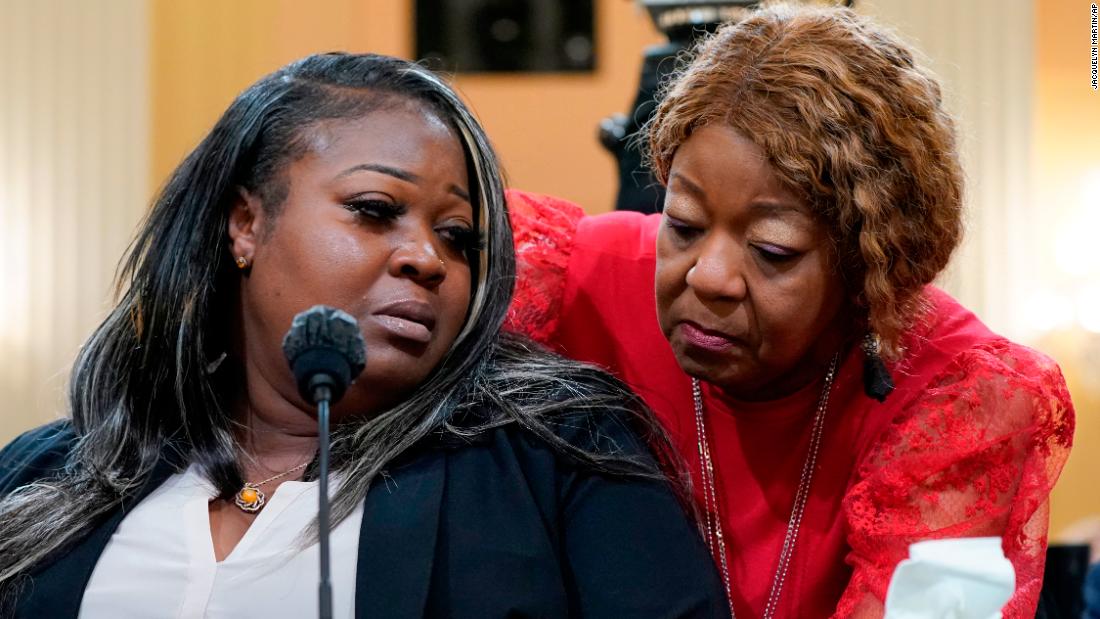 Reluctantly, Wandrea “Shaye” Moss and her mother Ruby Freeman on Tuesday joined a pantheon of heroes who have defended the country’s core right to vote after relating the terrifying price they paid, simply for doing their duty to ensure free and fair elections in Georgia. In harrowing testimony to the latest House select committee hearing into the January 6, 2021, insurrection, the election workers poignantly explained how their lives were upended by Trump and Rudy Giuliani’s ludicrous claims that they were election fraud hustlers.

“There is nowhere I feel safe. Nowhere. Do you know how it feels to have the President of the United States target you?” Freeman said in previously recorded video testimony.

Moss, appearing nervous and distressed, told the committee in person that Trump’s targeting of her and the often racist threats that followed turned her life upside down. “I don’t want anyone knowing my name. … It’s affected my life in a major way, in every way — all because of lies,” she said, noting how she once delighted in helping others vote, a right once denied to Black Americans like her grandmother, and which is still being imperiled by Trump and his henchmen.

Given the harassment and threats they had already faced, Moss and Freeman’s willingness to expose themselves to a national television audience was an act of extraordinary bravery. The mother and daughter pair testified after Republican officials and election administrators who helped save the country’s democracy from Trump’s coup attempt in 2020 revealed the extent of his bullying and pressure. Rusty Bowers, the GOP speaker of the Arizona state House, said that what Giuliani and Trump asked him to do, without any evidence of election fraud, would be contrary to oaths he swore to the Constitution and the rule of law.

“It is foreign to my very being, I will not do it,” Bowers said.

Bowers, who said he had hoped the ex-President would win the 2020 election, lived up to the highest principles of democracy and patriotism. He honored the will of Arizona voters (who delivered Joe Biden a win in the state) and his oath to uphold the Constitution, while speaking the truth — acts that all but guarantee being ostracized in Trump’s modern Republican Party.

Each of the witnesses on Tuesday, including Georgia Secretary of State Brad Raffensperger and Gabriel Sterling, a top elections official in the Peach State, had a searing tale of the personal ordeal they endured. Their testimony was vital because it highlighted the courage that is sometimes necessary to defend democracy from tyranny and repression. The principle that Americans have the right to choose their leaders is built on a foundation of thousands of small acts of civic duty as well as an acceptance of the results of elections, even if they don’t deliver the desired outcome.

The valor of the witnesses, who even now, after all they have gone through, were willing to go public again was deeply impressive. It also contrasted with the weakness of many Republicans in the US Senate, House and around the country who know Trump’s behavior was destructive but refused to stand up to him in order to save their own political skins. It reflected poorly on the large numbers of Trump supporters in Congress who are doing everything they can to discredit the House select committee’s work. And the witnesses’ willingness to accept facts, do their jobs in the face of intense pressure and stand up for their duty to the Constitution, stakes out an implicit contrast with Trump and his cowardice in refusing to accept the reality of his loss in 2020.

Tuesday’s hearing featured extended clips from Trump’s hour-long call to Raffensperger in January 2021 in which he piled pressure on the secretary of state to find more votes to overturn his loss to Biden in the state. Even though the call had been played in public before, it was still shocking to hear a desperate, lawless and often illogical President in the throes of trying to steal an election and conspiring to overthrow the will of voters.

Moss, for instance, said she had left her job as an election worker and most of the people she had worked with had done likewise. This does not only pose grave questions about Georgia’s capacity to run critical elections for governor and Senate this November. It may also offer an opening to the political hacks that Trump allies have been trying to install to administer elections in state and local posts despite no previous experience. If people like Moss and Freeman — patriots and civic-minded Americans — are forced out, elections will be far easier to steal and democracy could wither.

Still, Raffensperger’s testimony offered a ray of light for those who hope the GOP will turn away from its authoritarian path and once again embrace the peaceful transfer of power that another witness, Bowers, noted was once referred to as a “miracle” by Republican President Ronald Reagan.

Raffensperger, like Gov. Brian Kemp, another Republican who stood firm against Trump in 2020, recently triumphed over a primary foe backed by the ex-President — just two of several primary defeats for Trump in the Peach State this year. On Tuesday, state Rep. Bee Nguyen won the Democratic nomination to take on the GOP secretary of state in the fall.

Tuesday’s hearing was the latest televised examination of Trump’s attempts to thwart Biden’s election win in 2020 and the events that led up to the US Capitol insurrection he incited. The committee has produced testimony — mostly from those inside Trump’s former campaign and White House inner circle — that suggests he was repeatedly told he lost the election, that his fraud claims were spurious and that he knew there was no basis in law or the Constitution for his quest to block certification of Biden’s victory.

Most evidence so far has been from political operatives, lawyers or state and local officials — people who knowingly entered the bear pit of politics and know the sacrifices that it entails, though nothing can have prepared them for Trump’s coercion. What made the testimony of Moss and Freeman so powerful was that it came from Americans who had no reason to believe they’d be picked out in a national spotlight — let alone by a corrupt President — and who were doing their bit for their country to preserve precious democracy at the grassroots.

Moss’ privacy was destroyed when she learned that Giuliani had accused her mother of passing some kind of USB drive to her as part of an elaborate vote-stealing scheme. In reality, the object in question was a ginger mint, she said. In his call with Raffensperger, Trump attacked Moss 18 times, drawing her into the heat of one of the worst political crises ever to afflict the United States.

She added that she and her mother are now afraid to even go outside, or to the supermarket after getting threats “wishing death upon me, telling me that you know, I’ll be in jail with my mother and saying things like — ‘be glad it’s 2020 and not 1920.'”

Earlier, Sterling debunked Giuliani’s false criticisms of the election workers at the State Farm Arena in Atlanta, where Moss and Freeman worked during the electoral count. And he told how he had lost his temper and felt forced into giving a public speech in which he prophetically warned Trump that his actions could cause violence. The official also expressed deep frustrations at trying to rebut the torrent of falsehoods that convinced Trump’s supporters, including in Sterling’s own family, that his lies about a stolen election had merit. He compared the task of countering Trump with truth to “a shovel trying to empty the ocean.”

Bowers compared Trump and Giuliani to the “gang that couldn’t shoot straight” and described their election-stealing effort and fierce pressure on him as a “tragic parody.” Despite his deep conservatism and partisan preference, which in others translated to aiding Trump’s lawlessness, Bowers emerged as an exemplar of the courageous officials and citizens on whom democracies are built.

“I do not want to be a winner by cheating,” he said, reading a passage from a personal diary he kept in December 2020. “I will not play with laws I swore allegiance to.”

Events since the election, and Trump’s determination to root another White House campaign in his incessant lies, mean that other officials so far unknown to the nation may be called upon to do their duty to the Constitution under extreme duress in the future.

As Democratic Rep. Adam Schiff of California, a member of the select committee, put it at the end of the sobering hearing: “That we have lived in a democracy for more than 200 years does not mean we shall do so tomorrow.”