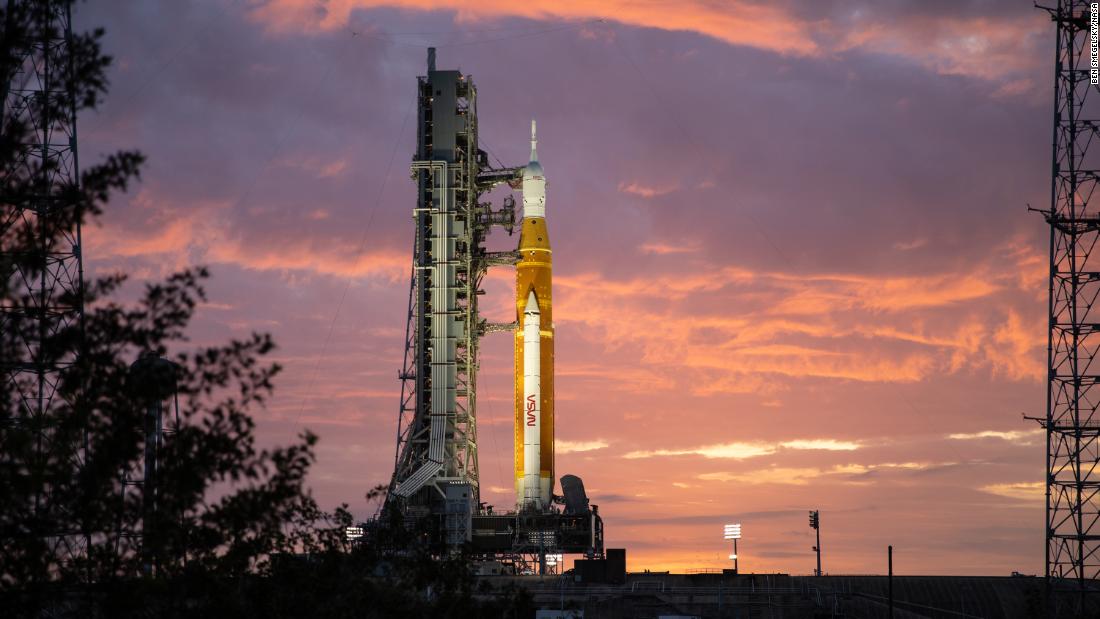 Monday’s crucial test, known as the wet dress rehearsal, simulated every stage of launch without the rocket leaving the launchpad at Kennedy Space Center in Florida. It included loading all four rocket tanks with supercold propellant, going through a full countdown and draining the rocket tanks.

A hydrogen leak and several other issues that cropped up during the test prevented the team from getting as far with the two countdowns as planned.

Three previous attempts at the wet dress rehearsal in April were unsuccessful, concluding before the rocket could be fully loaded. Despite the issues, the Artemis team sees the fourth attempt Monday — the most complete one yet — as a success. Applause rang out from the control rooms when the test concluded yesterday evening at 7:37 p.m. ET.

The results of the wet dress rehearsal will determine when the uncrewed Artemis I will launch on a mission that goes beyond the moon and returns to Earth. This mission will kick off NASA’s Artemis program, which is expected to return humans to the moon and land the first woman and first person of color on the lunar surface by 2025.

During a news conference on Tuesday, Tom Whitmeyer, deputy associate administrator for NASA’s common exploration systems development, compared preparing to launch a new rocket to a delicate dance and assembling a complex puzzle.

“We got through the dance, and now we’re looking at the pieces of the puzzle to decide what are the pieces that we didn’t get,” Whitmeyer said. “But we also got an awful lot of pieces to the puzzle put together. We have a pretty good idea what the puzzle looks like at this point.”

During the trial, the team was unable to resolve the issue of the hydrogen leak, which was discovered in a quick disconnect line between the rocket’s core stage and a ground plate. Engineers are still assessing whether it’s best to leave the rocket sitting on the launchpad and try to repair it there, or roll the 322-foot-tall (98-meter-tall) Space Launch System and Orion spacecraft stack back inside the Vehicle Assembly Building.

Despite the leak, the Artemis team came up with a plan to go through a countdown, said Charlie Blackwell-Thompson, NASA’s Artemis launch director.

During a transition between the ground launch sequencer computer and the flight software, the flight software flagged the hydrogen leak as a reason to stop the countdown with 29 seconds left. The goal was to reach nine seconds remaining in the countdown, but the team knew there was a 95% chance the test would shut down prematurely.

All four test attempts have helped the Artemis team reach milestones necessary on the road to launching a new rocket — and the majority of them were achieved on Monday. Mike Sarafin, NASA’s Artemis mission manager, estimated that the team’s progress is in the 90th percentile of where it needs to be, with very few objectives left to check off the list.

Now, the Artemis team will assess the tremendous amount of data collected Monday and determine what’s left and how best to test them — whether that means another wet dress rehearsal or something else.

“I’m a big believer in following the data,” Blackwell-Thompson said. “We’ll see where the data takes us and determine a path forward.”

Another update is expected from the Artemis team by the end of the week. Mission officials could share how the results of the test impact the potential launch time line and the estimated time needed for repairs and meeting the last objectives before launch.

Currently, they’re looking at possible launch windows for sending Artemis I on its journey to the moon starting in late summer: August 23 to August 29, September 2 to September 6 and beyond.