South Dakota AG impeachment trial: what you need to know 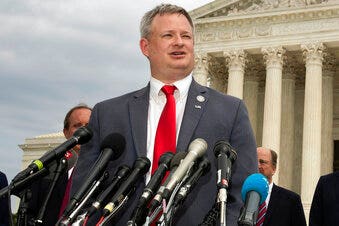 South Dakota Attorney General Jason Ravnsborg faces a historic impeachment trial this week for his actions surrounding a 2020 car crash in which he struck and killed a pedestrian.

As the state Senate prepares to decide whether the first-term Republican attorney general should be convicted and removed from office, here’s what to know ahead of the two-day trial that begins Tuesday:

WHY WAS RAVNSBORG IMPEACHED?

He struck and killed 55-year-old Joseph Boever as Boever was walking near the shoulder of a rural highway in September 2020.

Ravnsborg told a 911 dispatcher he hit “something” in the middle of the road and later said he believed he had hit a large animal. The next day, he returned to the crash site and said it was only then that he discovered Boever’s body.

After a lengthy criminal investigation, Ravnsborg pleaded no contest to a pair of traffic misdemeanors, including making an illegal lane change. Ravnsborg attempted to move past the crash, but Gov. Kristi Noem, a fellow Republican, pushed for his ouster.

The House in April impeached Ravnsborg on two counts: committing crimes that caused someone’s death and malfeasance in office.

South Dakota Attorney General Jason Ravnsborg is facing an impeachment trial this week after he struck and killed a pedestrian in a 2020 car crash.
(Andrew Harrer/Bloomberg via Getty Images)

WHAT ARE THE IMPEACHMENT CHARGES?

The first charge centers on the crash and Ravnsborg’s driving record leading up to it.

“The attorney general has broken the law, and as a result of that one of our citizens has died,” Republican Rep. Will Mortenson told the House as he argued for impeachment. Mortenson said the crash was part of a “disturbing pattern” of driving by Ravnsborg, pointing to a score of traffic tickets and warnings he had accumulated.

The malfeasance charge covers a range of Ravnsborg’s actions.

House lawmakers say Ravnsborg misled law enforcement, from telling a 911 dispatcher the collision happened “in the middle of the road” to later interviews in which criminal investigators said the attorney general was not being straightforward and telling the truth.

The House lawmakers also argue Ravnsborg abused the powers of his office by using official letterhead for a statement on the incident and later questioning a Division of Criminal Investigation agent about what the crash investigators could find on his cell phone.

Ravnsborg has consistently denied wrongdoing and cast the Senate trial as a chance to be “vindicated.”

WHAT WILL HAPPEN AT THE IMPEACHMENT TRIAL?

It takes two-thirds of the Republican-controlled Senate’s 35 members to convict Ravnsborg, which would trigger automatic removal as attorney general. If he is convicted, senators could also bar him from holding future office with another two-thirds majority vote.

They will make that decision after convening for two days in the first impeachment trial in state history. It will also give both sides an opportunity to openly present and examine the details of an incident that has roiled state politics for well over a year.

Lawmakers have opted for a speedy trial. The impeachment prosecutors and Ravnsborg’s defense attorney have each been allotted one hour for an opening statement, four hours for witness testimony and one hour to close their arguments.

He was initially part of the criminal prosecution team but left before a charging decision was announced.

One former Division of Criminal Investigation agent fielded questions from Ravnsborg about what could be extracted from his cellphone during the crash investigation, and another was asked about polygraph testing.

Ravnsborg has not said whether he will testify.

His defense attorney Mike Butler will not call any witnesses. He will instead rely on cross-examination of the prosecution’s witnesses as well as oral arguments.

Senators may take additional time to ask additional questions and debate the articles of impeachment. They plan to vote on a verdict by the end of the day Wednesday. The Senate will vote on each impeachment article, as well as whether to bar him from holding future office in the state.

The trial outcome may have implications for others besides Ravnsborg.

A conviction would be a victory for Noem, who has adamantly pushed for Ravnsborg’s ouster. She said last year she was “outraged” at the result of the criminal investigation and suggested that impeachment could hold Ravnsborg accountable.

Noem would name Ravnsborg’s replacement until the candidate elected in the November race for attorney general is sworn-in. Ravnsborg was up for reelection this year but decided not to run.

Ravnsborg has argued that the governor, who has positioned herself for a possible 2024 White House bid, pushed for his removal in part because he had investigated ethics complaints against Noem. His office is also investigating whether an organization aligned with the governor broke campaign finance disclosure laws.

It’s not clear how Ravnsborg’s permanent ouster would affect those investigations.

Meanwhile, the South Dakota GOP is set to decide its next candidate for the attorney general’s office at a convention in the days after the Senate trial. One of Ravnsborg’s top aides, David Natvig, has declared his interest in the nomination and portrayed himself as someone who could continue Ravnsborg’s work.

Natvig directed the Division of Criminal Investigation under Ravnsborg.

However, Marty Jackley, who held the attorney general’s office for roughly a decade before Ravnsborg, is also vying for the GOP nomination for his old job. He has support from Noem and from much of the state’s law enforcement community.

Delegates from each county Republican party will vote on an attorney general nominee on June 25.