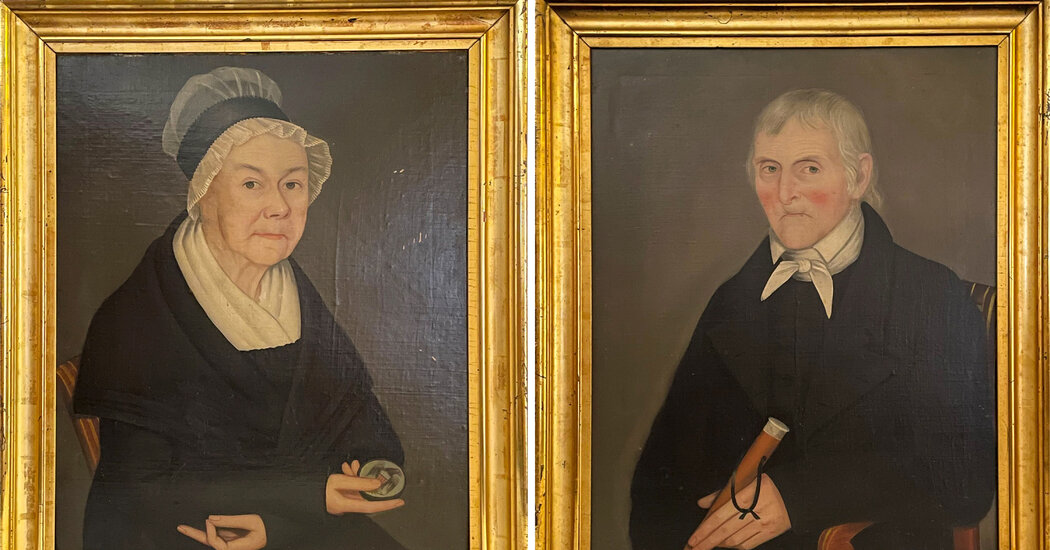 On a Wednesday evening in February 1972, as police officers and emergency responders in New Paltz, N.Y., flocked to a fire, somebody snatched a pair of 19th-century portraits of a wealthy local couple from a historical society elsewhere in town.

The theft also resulted in the loss of dozens of objects, some three centuries old, including a prayer book, a powder horn and antique guns and swords. At the time, the president of the society estimated the items to be worth about $30,000, a figure he said was dwarfed by the sentimental value they offered the historic community, which is about 85 miles north of New York City and was settled in the 17th century by the descendants of French Protestants.

Many of the items were recovered at a Manhattan thrift shop several weeks later, but the paintings from the 1820s — sullen portraits of a rosy-cheeked man with a puckered mouth and a woman holding a snuff box — were not among them.

This month — more than 50 years after the theft — the F.B.I. announced that the portraits had been returned to the society, Historic Huguenot Street, thanks in part to the persistent detective work of two local sleuths — a curator and a librarian.

Immediately after the crime took place, it was infused with intrigue. Local officials speculated that the fire, at a Veterans of Foreign Wars building, was linked to the theft, a theory that gained traction in a local newspaper. While the police responded to the fire, “the robbers had a free hand on Huguenot Street,” The Daily Freeman of Kingston, N.Y., reported.

The paintings were done in oil by Ammi Phillips, a famed 19th-century portraitist, and they depicted Dirck D. Wynkoop and his wife, Annatje Eltinge, key figures in the history of New Paltz. Mr. Wynkoop owned farmland that had helped feed the American colonists during the Revolutionary War. He had a darker history that was also entwined with that of the fledgling country: He owned slaves.

To Carol Johnson, a librarian at Elting Memorial Library in New Paltz and a society trustee, the theft of the paintings deprived local residents of a chance to learn how their history connected to the broader story of America, warts and all.

As the coronavirus pandemic took hold in 2020, Ms. Johnson joined up with Josephine Bloodgood, the curator of the historical society, to create an exhibit about a man named Jacob Wynkoop, a New Paltz carpenter who was among the first Black men in the community to vote and who fought in the Civil War. Jacob Wynkoop’s father had been enslaved by Dirck D. Wynkoop.

Their mutual interest in Jacob Wynkoop led Ms. Johnson and Ms. Bloodgood to take a crack at solving the mystery of the missing paintings.

Ms. Johnson and Ms. Bloodgood were armed with a black-and-white postcard image of the stolen portraits that had been distributed to art dealers shortly after the theft. They compared notes and records but quickly hit a roadblock: The paintings, to their knowledge, simply had not surfaced in the half-century since they were taken.

A break came around June 2020, when they spotted the paintings in an online catalog of works by Mr. Phillips. The catalog said that the portraits were of unidentified subjects and that they were sold at auction by Sotheby’s in 2005.

“There was shock that they were out there in plain sight,” Ms. Bloodgood said.

After purchasing a Sotheby’s catalog from eBay, Ms. Bloodgood confirmed that the paintings had, in fact, been put up for auction in 2005, and that they had sold for roughly $13,000, a paltry amount compared with some of Mr. Phillips’s more famous work.

With their research in hand, the two women contacted the F.B.I., which has a team dedicated to art crime. It subpoenaed Sotheby’s and discovered the name of the buyer, who was unaware that the paintings had been stolen, according to the F.B.I. and the researchers. The buyer agreed to turn over the paintings, the researchers said, though it was unclear whether the buyer received money in return.

“It’s so rare to have portraits of individuals from this early period, especially for New Paltz,” Ms. Bloodgood said. “We’re so pleased to have the Wynkoop portraits back in the collection, where they can again be interpreted to tell a fuller story of our community and how it relates to the rich and complicated history of our country.”

The researchers never contacted Sotheby’s for help. The couple’s names were on the backs of the paintings. Ms. Johnson said that should have been enough information for the auction house to know the paintings were stolen.

A lack of transparency among auction houses and a desire to protect the privacy of art buyers and sellers create a culture in which art theft can flourish, said Erin Thompson, an associate professor of art crime at John Jay College of Criminal Justice.

“From the perspective of me — suspicious, cynical art critic — it creates opportunity to launder stolen or looted objects, as seems to have happened with these,” she said, adding that it was unclear what paperwork Sotheby’s received with the paintings. “Who knows how convincing that paperwork is or what the auction house asked for?”

They plan to keep exploring that question as they try to locate other items lost in the theft.