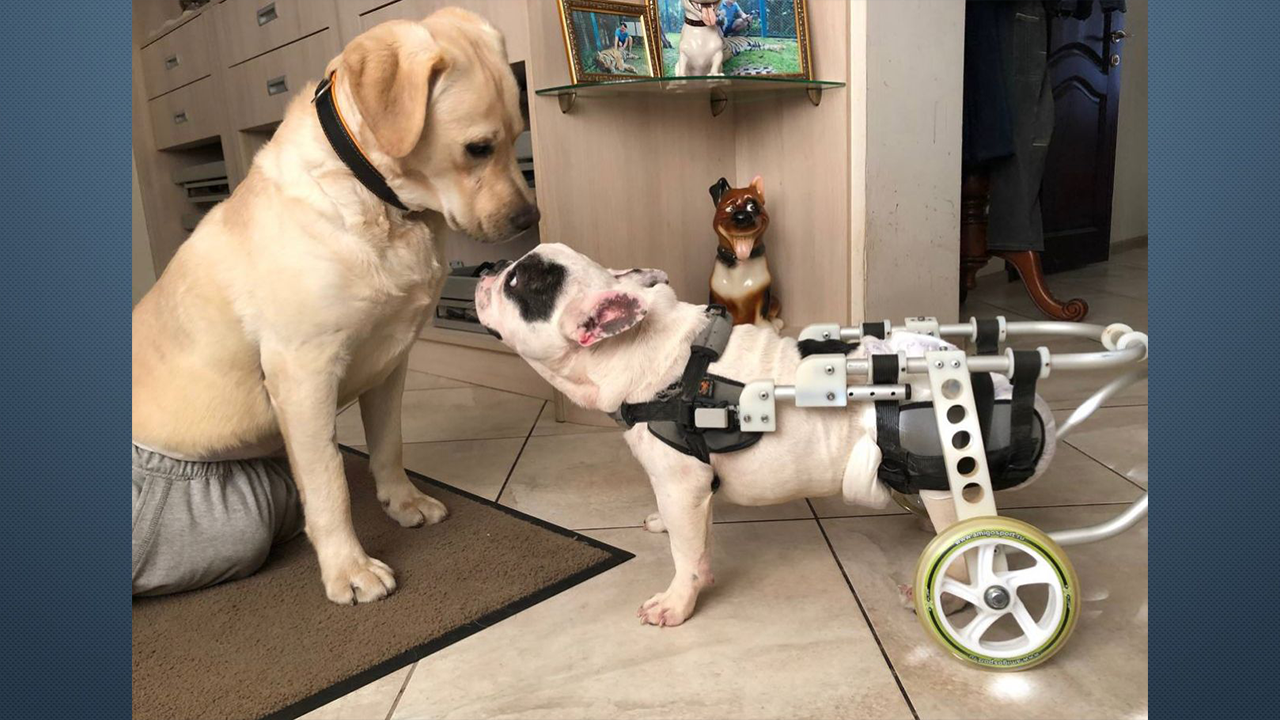 Americans are familiar with wrenching images and tragic stories of civilians killed or forced to flee war-torn Ukraine during Russia’s on-going invasion, but many overlook the pets left behind who must fend for themselves while navigating streets that are constantly under attack.

That’s why tech entrepreneur Dan Fine founded Ukrainian Animals War Relief Fund (ARF), a nonprofit that is on a mission to save displaced Ukraine pets using cutting-edge technology, along with old-fashioned love and care.

Fine, who has focused on his passion for animals since retiring from a successful career in tech, traveled to a Polish town alongside the Ukraine border earlier this year and volunteered to walk dogs and feed cats that suddenly became homeless following Russia’s invasion. He was close enough to hear missiles explode in Lviv and, along the way, saw devastating injuries to beloved animals that will haunt him forever.

“I got a dog out of the hospital, and I’m taking him for a walk, and he lifts his leg to take a pee and his guts were hanging out. His guts were hanging out,” Fine told Fox News Digital. “And so I’m like, ‘Oh, my gosh,’ I took him back, and I’m trying to talk to the vet who doesn’t speak English, and I just point them in, and he looks down, and he grabs the dog and takes him up into surgery… we had dogs that had been shot eight times and lost the ability to walk.”

One dog named Pablo was shot eight times and needed surgery to have bullets removed from him. The heartbreaking stories are endless.

“There was another dog a friend of mine wanted to adopt that I was willing to bring home. But then the veterinarian showed me his X-ray and he had shrapnel throughout his spine and he had to be operated on,” Fine said. “This is a horrific, horrific situation that, you know, needs attention.”

Fine even found himself making wheelchairs out of pipe and Velcro to help transport injured dogs. An early internet pioneer who developed websites for hundreds of major corporations, Fine launched ARF to help dogs and cats that are victims of the war in Ukraine.

“While I was there, I saw the kind of efforts that went towards humans. And I believe in that, right? I’m not saying animals over people, but, you know, the Red Cross, their World Central Kitchen is there. They have tons of technology. The military is there. They’ve got busses, they’ve got all kinds of things because we’re used to doing this. We do it in Syria, we do it in Libya. We do it in Afghanistan. We take care of people,” Fine said. “But what I found out, and I did the research on this, animals have no rights.”

He then helped put together a portal to connect independent volunteers with warehouses and shelters to bring some order to the Ukrainian shelter system.

“The shelters are all throwing their hands up, going, ‘Send me stuff,’ and then volunteers just go in and deliver it at great risk and then, we don’t know, some shelters are not getting anything and some shelters are getting too much,” he said. “So we approached Microsoft and we put together a portal that gives visibility to all the shelters, all the drivers, all the warehouses, so we know that this is a real warehouse. They got 600 dogs and 100 cats and this is how much food they need, and then we can start using like predictive technology to figure out what the supply chain should be fixed for that.”

Fine also used his background and connections to establish a technology platform powered by Microsoft’s not-for-profit social initiative to help catalog abandoned pets to help reunite them with Ukrainians who were forced to flee the nation.

“There’s easily a million stray animals right now, if not two million wandering around Ukraine looking for food, and they’re going to start mating, and they’re in shelters that don’t have protection because they don’t have enough cages. You’re going to have a huge problem,” Fine said.

“So we said, we need to set up mobile units to go over there and spay, neuter, vaccinate these animals. And then we thought about, and we said, ‘Well, let’s work that with Microsoft and put in a chip or read their chips and try to reunite them with their owners,'” he continued. “So we decided to… create kind of the largest blockchain in a record of Ukrainian animals so that when people can go back to their homes or if they’re set up a new home in Italy or Spain or France, they’ll be able to connect and reconnect with their dog or cat.”

Fine doesn’t want anyone across the world to think the pets were abandoned because dogs and cats simply aren’t beloved in Ukraine. He explained that panicked civilians made a beeline, often with children in hand, to exit the country as roads and bridges were being destroyed by Russian troops. But often, so many people were attempting to cram into busses or trains that there wasn’t room for luggage, let alone pets. The tragic circumstance didn’t provide much of a choice for Ukrainian pet owners who needed to get out of harm’s way before it was too late.

“I can’t even imagine leaving my baby behind, and they’re forced to do that,” he said. “I couldn’t imagine the heartbreak… it’s like having a five-year old child and I just can’t imagine leaving them alone to try to figure this thing out on their own and feed themselves.”

Fine said the need for animal rights during wartime – which he plans to lobby the government to assist with – came to light when Feldman EcoPark, a zoo located near the city of Kharkiv in northeast Ukraine, was devastated by Russian forces.

“They have zero rights, and so the Russians can come over and just shoot as many as they want. And there’s zero accountability. There’s no accountability for that, and that’s completely wrong. These are people’s pets. We domesticated them,” he said. “We owe them the right to take care of them and to look after them… so one of the things that our Ukrainian War Animal Relief fund wants to do is lobby the government to try to get rights for animals during war.”

Fine hopes major animal charities across the globe work with ARF and employ the technology the foundation has developed to help as many animals as possible, such as Ukraine zoo animals who’ve been affected in the war. In the meantime, he hopes to bring awareness and raise money to help the displaced pets in Ukraine.

RUSSIA’S WAR IN UKRAINE COULD DRAG ON FOR ‘YEARS,’ NATO CHIEF SAYS

“It’s kind of a cool project because it’s not just a rescue and relief fund. It really is thinking proactively about the future by using technology and adding intelligence and kind of smarts into the system. And, you know, if you care about animals, it’s more than just going in and walking dogs. I mean, I found that really beneficial for me, but it’s a drop in the bucket,” he said.

“We have to affect a lot more animals, millions. And the only way to do that, to be smart about it, is using technology. So one of the things we want to do is if people do donate to us and share our information about our Go Fund Me, we’re going to create an NFT for them of one of those animals. An NFT is a non-fungible token up on the blockchain,” Fine continued. “Our hope is to have, you know, the most complete blockchain database of Ukrainian animals that people will be able to search, either if they want to adopt or if they want to buy an NFT and invest into the crypto world, or if they want to be able to just reunite with their animals.”

Fine’s first trip to help the animals of Ukraine was motivated by Lawrence Anthony’s work about an elephant sanctuary, “The Elephant Whisperer,” and the journey resulted in the creation of ARF.

“At the back of the book he talks about during the Iraq war, he and his son went to the Baghdad Zoo to take care of the animals… the distress, the PTSD that they suffer from bombs being dropped around you are so sad,” Fine said. “So, he went over to help, and I thought, ‘Hey, I could do this.’”

Brian Flood is a media reporter for Fox News Digital. Story tips can be sent to brian.flood@fox.com and on Twitter: @briansflood.