How the Abortion and Gun Debates Look From Alabama 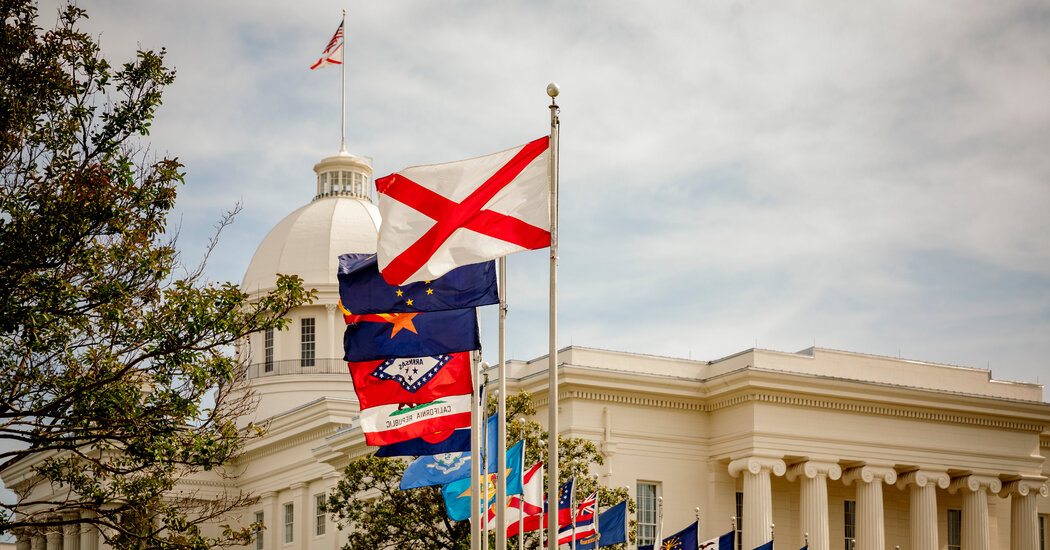 AUBURN, Ala. — I’m a left-leaning Democrat, but on May 24, I voted on the Republican ballot in Alabama’s primary election. The state’s primaries are open, which means Democrats can request a Republican ballot, and vice versa. Alabama is a deep red state, and I wanted some say in electing the officials who will represent me, because they will almost all certainly be Republican.

And have a say I did: Tom Whatley, the state senator for my district, finished behind Jay Hovey by a single vote. (A hearing on Saturday will determine whether Mr. Hovey will be declared the winner.) I voted for Mr. Hovey because I find Mr. Whatley’s policies and legacy so abhorrent. If I hadn’t cast my vote on a Republican ballot, the two men would be tied.

The walk from my car to the polling station seemed long because I was 38 weeks pregnant, and the heat of our Southern summer was already in full force.

Mr. Hovey’s campaign literature describes him as “a conservative, Christian Republican” who’s going to “fight for our children, born and unborn,” and “protect our Second Amendment rights.” And the rest of us — meaning the nonconservative, non-Christian citizens of our district — “can go eat glass,” as a friend of mine put it.

In 2019, Alabama enacted a near-total ban on abortion. I drove three friends to the Capitol in Montgomery, an hour away from Auburn, where we protested; the ban was blocked because abortion rights are protected federally. It’s likely they won’t be for long, that soon I’ll live in a state where abortion is largely, if not completely, restricted; a state that will also allow, come January, individuals to carry a concealed weapon without a permit.

That’s a bill Mr. Whatley supported, though our county sheriff came out against it. I’d like to think Mr. Hovey would not support such dangerous idiocy, but I might be kidding myself.

Mr. Whatley seemed to forget, as a lot of the politicians here do, that he represents me and my family, along with my conservative Christian neighbors. But I think Democrats in Washington have forgotten they represent Alabamians, too.

My thinking on why we’re in the situation we’re in — where 61 percent of Americans say abortion should be legal in all or most cases, yet that access may soon to be taken away — has changed greatly since I moved to the Deep South from Missouri, nearly seven years ago. Democrats have ignored this state, and its neighbors, for decades. I have heard some of them describe people here as ignorant, backward and deplorable. I can’t tell you how many times people who live in big, blue cities have blinked in amazement when I tell them I live in Alabama, or that I like it. That surprise is its own kind of ignorance.

And I do like it. I think it’s valuable to live in a place where everyone doesn’t think exactly the same as I do, but beyond that, I love the natural beauty of the South, the friendliness, the food. The stories. The South has flaws, but so does every place. Every time I write an essay about my home I get hate mail. It’s less directed at me and more directed at the South — a place that I am sometimes told should no longer exist. It’s easy to write off an entire region from afar; less easy when you live here.

There’s so much beauty in rural Alabama, and it often abuts terrible poverty. A brilliantly hued hydrangea next to a trailer with blacked-out windows. A row of abandoned old houses next to a field of unmown wildflowers. I do believe that Democratic policies are friendlier to the poor, but how would you know that if you live in a trailer without running water or internet in the middle of a state that has long been out of play for Democratic candidates in national elections? (The victory by a Democrat, Doug Jones, in the U.S. Senate special election in 2017 was anomalous; three years later he was beaten by a Republican former college football coach with no political experience.)

I understand why Democratic presidential candidates wouldn’t want to waste time and money campaigning here — Alabama feels as if it belongs to Republicans. This is a state with three abortion clinics; as of 2017, there were 113 of them in New York.

The afternoon of the primary in May, my parents came over to watch my children so my husband and I could go to my final ultrasound. I am considered high risk because I’m 40 and so during the last weeks of my pregnancy I was closely monitored. There is no doubt in my mind I received excellent care. There is also no doubt in my mind that care for me and other women will be compromised if abortion rights are dismantled. Women would seek out unsafe abortions. Certain forms of birth control might be made illegal, a miscarriage might be dangerously drawn out — really, the possibilities are endless.

Your body does not feel like your own at the end of a pregnancy. My stomach was so large it looked otherworldly, especially when the baby inside moved. I was exhausted and swollen. My mind didn’t feel particularly like my own, either. My thinking was scattered, my attention span short. This will be my last pregnancy. I feel lucky to experience it.

But that feeling — luck, as if I’m the witness to some kind of magic, the magic that produces a human from a womb — can exist, and does, alongside my belief that its barbaric to deny women the choice of whether they want to carry a child in the first place.

I can believe in the ideals of the Democratic Party while believing that the party has, in certain respects, lost its way; I can become enraged at its recent, hollow attempt to codify abortion rights into federal law. The party’s leadership seems to be looking at this moment as a way to improve its chances in the midterms.

I look at this moment quite differently. I think of all the poor women who live in this state, the women who will disproportionately be forced to carry pregnancies they do not want, who cannot afford to travel to the nearest clinic that legally provides abortion. Is it naïve to wonder why Democrats at the national level didn’t try harder to provide easier access to abortion in red states when they could have? Why don’t elected officials truly serve both the people who vote for them and the people who don’t? That these questions seem naïve, that I already know the answers, doesn’t make them any less pressing.

I read the earliest news of the school shooting in Texas while scrolling through my phone in the ultrasound clinic’s waiting room, where my husband and I saw the first images of our child’s face, rendered in 4-D. By the time I gave birth, a week later, the same arguments that always play out between right and left after mass shootings were playing out again. Nothing had changed. Usually I ignore mass shootings, because they seem like the price of living in this country. It’s harder to do when the victims are children.

Anton DiSclafani is the author of the novels “The After Party” and “The Yonahlossee Riding Camp for Girls,” and an associate professor of creative writing at Auburn University.