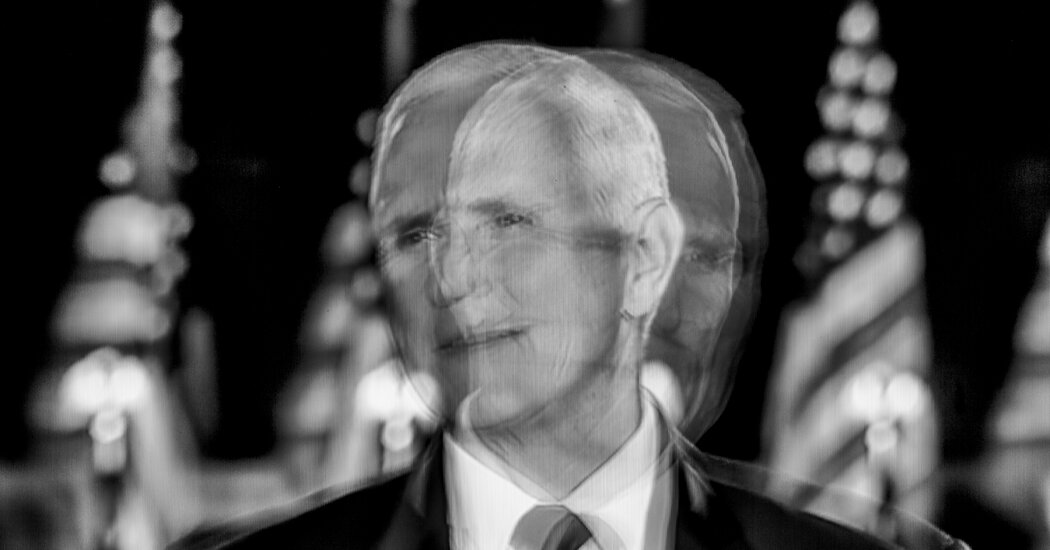 Gail Collins: Bret, I never did like Mike Pence at all — his far-right social values would have turned me off even if he didn’t call his wife “Mother.”

Gail: And I’ve never forgotten the moment when Lesley Stahl of “60 Minutes” asked Pence if he ever thought he’d be able to tell Donald Trump he needed to apologize for having “crossed the line.” Pence just kinda babbled without answering until Trump interrupted. “Absolutely. I might not apologize,” Trump said. “But I would absolutely want him to come in.”

But now, the worm has turned! Except I guess I shouldn’t be calling Pence a worm any more.

Bret: I’m having a hard time joining the “Mike Pence the Hero” bandwagon that some of my old friends on the right have jumped aboard.

Where was Pence in November when Trump started lying about the election the moment their defeat became clear? Where was he when the president enlisted the likes of Sidney Powell and John Eastman to peddle insane conspiracy theories about voting machines and preposterous interpretations of the Electoral Count Act? Where was he on invoking the 25th Amendment after the assault on the Capitol, or at least on supporting impeachment? Pence was a worm who, for a few hours on Jan. 6, turned into a glowworm.

Still, I keep imagining what chaos the country would have fallen into if Pence had panicked and refused to count the election results back to the states instead of just certifying Joe Biden as president.

Bret: Nancy Pelosi would have beaten him to a pulp with that giant gavel of hers before he could have done it.

Gail: That’s an image I plan to carry around with me for a long time.

Bret: Also, can I fume a bit about the so-called sane right’s position on all this? They’re busy trying to switch the subject to left-wing rioting, as if trashing a courthouse in Portland, bad as that is, is somehow an equivalent event to a sitting president inciting a violent mob to trash the Capitol in order to overturn a national election.

Gail: Feel free to fume for both of us.

Bret: OK, end of rant. What conclusions do you draw from the Jan. 6 committee hearings?

Gail: Well, we certainly were reminded that Trump was totally complicit in the Jan. 6 assault on the Capitol.

Gail: Yeah, thanks for the better word. And apparently when he insisted he won the election he was ignoring virtually everybody giving him advice except Rudy Giuliani.

Wow, just imagine a defiant Trump telling his expert counselors: “That might be all your opinion — but Rudy was making some very good points before he passed out over there.”

Bret: Some of our younger readers may not remember that Giuliani was Time’s Person of the Year in 2001 for his leadership after the attacks of Sept. 11. His fall from grace has been like a bungee jump minus the bungee.

Gail: Giuliani’s role during Sept. 11 was … not what you imagine. He wouldn’t, for instance, have been dramatically marching around the streets after the attack if he hadn’t moved the critically important emergency command center into the World Trade Center, a well-identified terrorist target, because he wanted it within walking distance of his office.

Could go on, but for me Rudy’s fall from heroic grace goes back a trillion years.

Bret: I’m beginning to think you’re right. Never did like the way he went after Michael Milken.

Gail: As for Trump, even if nothing we learned at the hearings has been a big surprise, it’s so, so very important to get all this stuff on the record in as public and evenhanded a way as possible.

And again, I’ve gotta say: Good work, Mike Pence. You’re a terrible person, but you had a moment. If the vice president had panicked and gone to hide in a relative’s basement when it was time to certify the election, can’t imagine where we’d be now.

Bret: Pass the peyote. Gail Collins has a better impression of Mike Pence than I do.

And what’s your prediction for what happens next to Trump? Presidential election bid in 2024 or the slammer?

Bret: In a just world? I’d want one jury to indict him, another to convict him and a warden to lock him up — to borrow a phrase.

What I don’t know is whether that’s the smart thing to do. On one hand, prosecuting him would be a good reminder that we’re a nation of laws. On the other, it would radicalize the right even further, turn him into a national martyr to about a third of the country if he goes to prison and make him a clear and present danger to everyone else if he doesn’t. And it would be the only thing the country could talk about for years while we have a few other problems to deal with.

Gail: Prosecuting Trump would be righteous, but you’re right — it would leave him subject of still more right-wing hero-worship. My real dream is to see him go completely bankrupt.

Gail: Permanently this time. First we have to get past 2024 and any chance he returns to the presidency, God help us. Then all the civil lawsuits and public investigations into his business dealings in New York come to fruition — and then he’s down to a basement apartment in Staten Island.

Bret: Even Staten Island doesn’t deserve that. But I doubt Trump will be convicted or fined for all of his dodgy business deals. His crime is treason, in the Constitution’s precise definition: levying war against the United States or adhering to its enemies and giving them aid and comfort.

Gail: I agree about what he deserves, but I’m still worried the long and unprecedented attempt to send him to jail would fail while splitting the country way more.

And I’d love to dwell on my vision of Trump holding out an empty coffee cup on some corner, begging for change. Maybe not realistic, but so … sweet.

Now we ought to talk some about Biden and the state of the economy. Feel free to vent.

Bret: Many of our readers have fond feelings toward Jimmy Carter as a person, but the Biden administration increasingly feels like a rerun of the Carter years, complete with stagflation, an energy crisis and Moscow invading a neighboring country. The smartest thing Biden can do, politically and economically, is to stop blaming others — even genuine villains like Vladimir Putin — so that his administration doesn’t project an air of being at the mercy of events.

Bret: As I was saying last week, he should fire Janet Yellen, preferably this week, and replace her with Larry Summers. It will create a sense of accountability and put energy in the executive, as Alexander Hamilton might have said. Work with Canada to import more oil, whether by rail or pipeline or truck: It beats getting our oil from Venezuela. Give Commerce Secretary Gina Raimondo or the infrastructure czar Mitch Landrieu the job of anticipating and preventing consumer-goods shortages, from baby formula to tampons to whatever is next.

If all this sounds extreme, consider what will happen if we just drift along until President DeSantis takes the reins in 2025. Or President Trump. But I’m always happy to hear of a better way.

Gail: I don’t blame Yellen for our economic mess, although I’d sadly sacrifice her if it would move us forward. Your other ideas don’t sound extremely extreme — although if we’re going to start piping oil from Canada the plan needs to be married to the battle against global warming.

Bret: Step One: Subsidize an accelerated transition to a hybrid- and electric-car vehicle fleet. Step Two: Build safer next-generation nuclear reactors to power more of the grid. Step Three: Blame Canada for any and all remaining issues.

Gail: Well, giving you half a step for the electric cars.

Back to the economy: If Biden had any prayer of getting Congressional support, I’d want him to return to his early-administration dreams. Invest in quality child care options to bring women back into the work force and reduce the labor shortage. Give lower- and middle-income workers a jolt of extra cash through tax rebates. Install his program to reduce the cost of prescription drugs. In a perfect world, fund a federal program to cut back on student debt.

Bret: Nice to be reminded that in some post-Trump universe, there’s a lot we still disagree about.

Gail: Of course, all this would cost money, and that’s why we’d need — yes! — tax hikes on the rich. Many of whom are making out like bandits in the current economy.

Bret: Let’s fight about that later. In the meantime, our readers shouldn’t miss our former opinion-page colleague Clay Risen’s wonderful “Overlooked No More” obituary for William B. Gould, who in 1862 escaped slavery in North Carolina by commandeering a sailboat, joined the crew of a Union blockade ship, kept a meticulous diary, went on to prosperity in Massachusetts and lived to be 85. Next year Dedham, Mass., will unveil a statue in his honor on the centenary of his death. A great reminder of all that’s worth celebrating this Juneteenth.