Heaviest rain in 60 years hits southern China, as experts warn extreme weather will only get worse 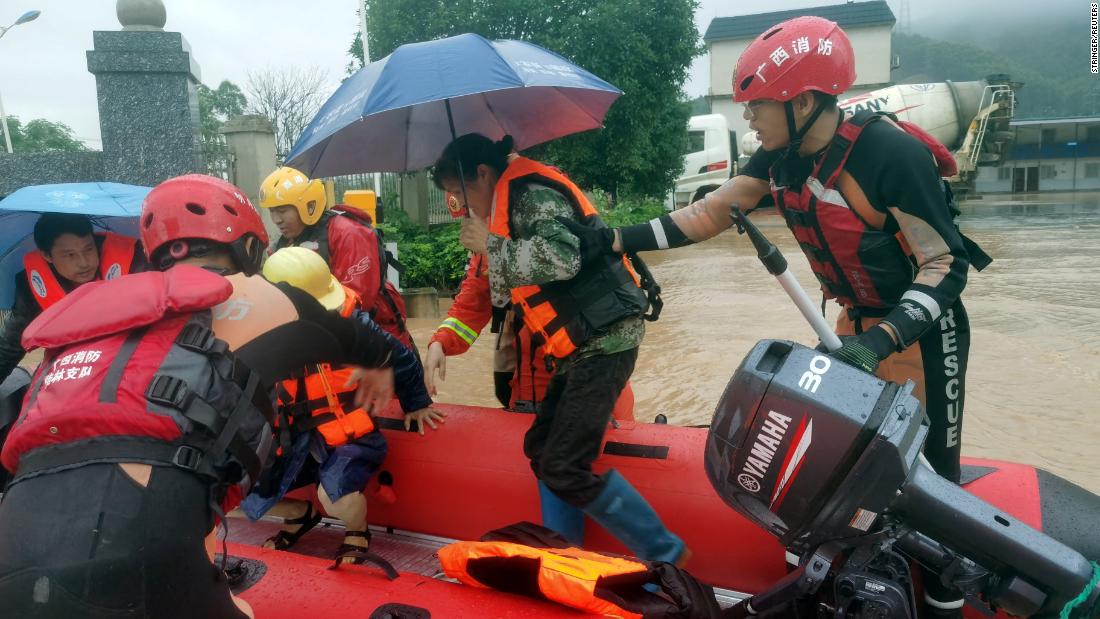 Severe landslides have been reported in at least seven provinces and many roads are flooded, according to state media. In southwestern Guizhou province, swollen rivers spilled over roads, sweeping away cars and homes, videos on social media showed.

Precipitation in Guangxi, Guangdong and Fujian reached its highest since 1961, local weather bureaus said on Saturday, as those areas recorded an average rainfall of 621 millimeters (24.4 inches) in the 46 day period from May 1 and June 15, according to state news agency Xinhua. That figure is equal to more than 90% of the countrywide average of 672.1 millimeters for the whole of 2021, based on data by the National Climate Center.

Weather experts say conditions are ripe for further heavy rainstorms in the south of the country and heatwaves in the north.

“Cold and warm air has converged over southern China, and the two sides have entered a deadlock and a tug of war,” Wang Weiyue, an analyst at weather.com.cn, an arm of the China Meteorological Administration, told Reuters.

Heavy rain is forecast to persist until Tuesday in the southern provinces of Guizhou, Jiangxi, Anhui, Zhejiang and Guangxi and then move northward.

China’s annual flood season traditionally begins in June and is usually most severe in the densely populated agricultural areas along the Yangtze River and its tributaries.

But it has been growing more intense and dangerous in recent years and experts have warned things could get worse.

In April, the National Climate Center warned that extreme torrential rains were expected to lash southern and southwestern parts of the country, as well as the normally dry desert terrain of southern Tibet.

China recorded average annual rainfall of 672.1 mm last year, which was 6.7% above normal, according to a report released by the National Climate Center in May. The report concluded that China’s weather anomalies were getting worse, especially in terms of rainstorm intensity during the summer months.

The record rainfall comes amid efforts by China to tackle climate change.

The country’s Ministry of Ecology and Environment last week announced a new national climate change strategy to build resilience against the effects of global warming by 2035. The roadmap puts more emphasis on monitoring climate change and its related effects as well as developing early warning and risk management systems.

At least 1.1 million residents in China’s southeastern province of Jiangxi were affected by floods and downpours between May 28 and June 11, according to state news agency Xinhua, while 223,000 hectares of agricultural farmland in the timber and bamboo producing province were destroyed.

In early June, torrential rains in southern China killed at least 32 people. More than 2,700 houses were severely damaged and 96,160 hectares of farmland were destroyed in the rice-producing province of Hunan.

Last summer, 398 people were killed as devastating floods ripped through central Henan province. Among the dead were 12 passengers who drowned in a submerged subway line. The provincial capital of Zhengzhou saw the most deaths in what authorities called a “once in a thousand years” downpour.

State authorities have been on high alert ever since, amid growing questions over how prepared Chinese cities are for extreme weather.