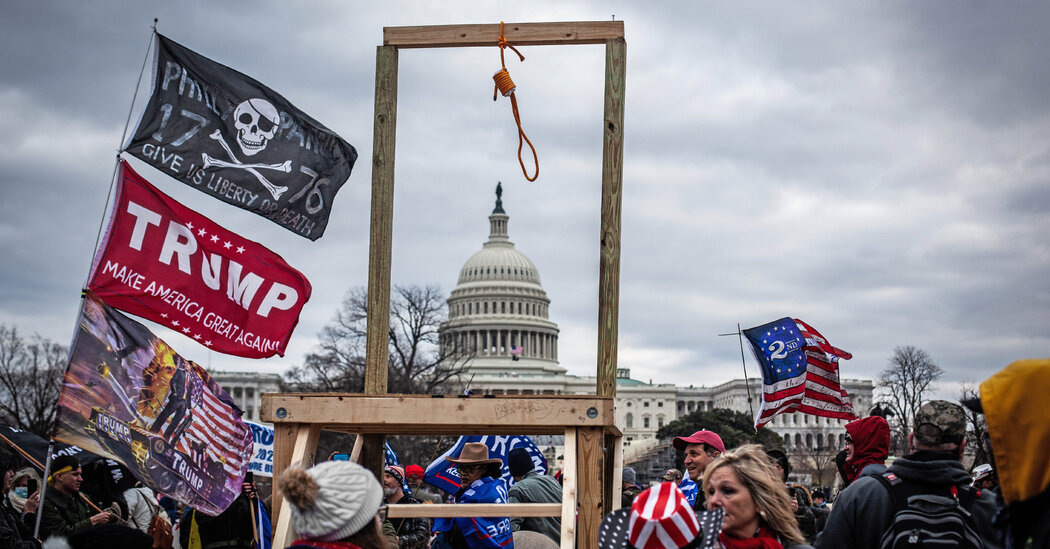 WASHINGTON — The fate of a sycophant is never a happy one.

At first, you think that fawning over the boss is a good way to move forward. But when you are dealing with a narcissist — and narcissists are the ones who like to be surrounded by sycophants — you can never be unctuous enough.

Narcissists are Grand Canyons of need. The more they are flattered, the more their appetite for flattery grows.

That is the hard, almost fatal, lesson Pence learned on Jan. 6, when he finally stood up to Donald Trump after Trump asked for one teensy favor: Help destroy American democracy and all we stand for.

Two new photos shown at a hearing of the House committee investigating Jan. 6 tell a shocking story — one of the most incredible in our nation’s history.

In one, Karen Pence is protectively pulling a gold-fringed curtain shut in the vice president’s ceremonial office in the Capitol, off the Senate floor, as Pence — sitting beneath a large gilt mirror — stares off into space, probably wondering where it all went wrong.

We learned this week that when the vice president fled down the stairs, followed by an Air Force officer carrying the nuclear launch codes, the marauding mob was a few feet from him.

In a second picture, taken after Pence was brought to a secure location in an underground garage, his daughter Charlotte is anxiously watching him. He is holding a phone to his ear as he stares at another phone showing a video of Trump professing love for the crowd, which included some who carried baseball bats and zip ties and chanted “Hang Mike Pence!”

In the early afternoon, as the crowd tore down barricades and fought police, White House staffers worried things were “getting out of hand,” as Sarah Matthews, a Trump aide, testified.

They thought that the president needed to tweet something immediately. At 2:24 p.m., they got a notification that the president had indeed tweeted. But it was not the calming tweet they had hoped for; it was one designed to drive the rioters into a frenzy.

“Mike Pence didn’t have the courage to do what should have been done to protect our Country and our Constitution, giving States a chance to certify a corrected set of facts, not the fraudulent or inaccurate ones which they were asked to previously certify,” Trump tweeted. “USA demands the truth!”

As Matthews recalled in her deposition, “The situation was already bad, and so it felt like he was pouring gasoline on the fire by tweeting that.”

Trump was still steaming from the contentious morning phone call when he failed to persuade the vice president to reject some of the states’ electors so they could be replaced with fake electors who supported Trump. He had railed at Pence with emasculating epithets.

As Trump recalled in a speech on Friday in Nashville, “I said to Mike, ‘If you do this, you can be Thomas Jefferson.’ And then, after it all went down, I looked at him one day and said, ‘I hate to say this, but you’re no Thomas Jefferson.’”

Trump sparked the mob to seek vengeance against Pence the same way Henry II sparked a crew to murder Thomas Becket, the archbishop of Canterbury, in 1170. According to legend, after Becket defied Henry by excommunicating bishops supportive of the king, Henry muttered something to the effect of, “Who will rid me of this meddlesome priest?” Four knights immediately rode to Canterbury Cathedral and sliced up Becket.

The line became a famous example of directing loyalists with indirection, cloaking an order as a wish. Who will rid me of this meddlesome vice president?

A Times video, showing how the Proud Boys breached the Capitol, underscored that within the confederacy of dunces, there was an actual organized conspiracy. The group began plotting even before the election to take up arms for Trump. When Trump barked “Stand back and stand by” about the Proud Boys during his debate with Joe Biden, the Proud Boys felt as though they had received a directive, like Henry’s knights.

With each hearing, it becomes clearer that Trump has no plausible deniability. He put the lives of the vice president and his family at risk, as well as the lives of lawmakers, by sending a crowd, stewing in lies, into a frenzy.

Pence did not have the power to do what Trump wanted, and it’s good that he resisted the insane, illegal and unconstitutional plan of the narcissist in the Oval. But Pence still wants it both ways. He has steered clear of the committee. He wants to become president by staying on the good side of Trump supporters, but they’re never going to forgive him.

At the end of the day of infamy, John Eastman, the nutty lawyer trying to help Trump overturn the election, sent an email imploring Pence to adjourn the congressional certification so sympathetic state legislators could help with Trump’s fairy tale of a rigged election.

The fate of a sycophant is never a happy one.