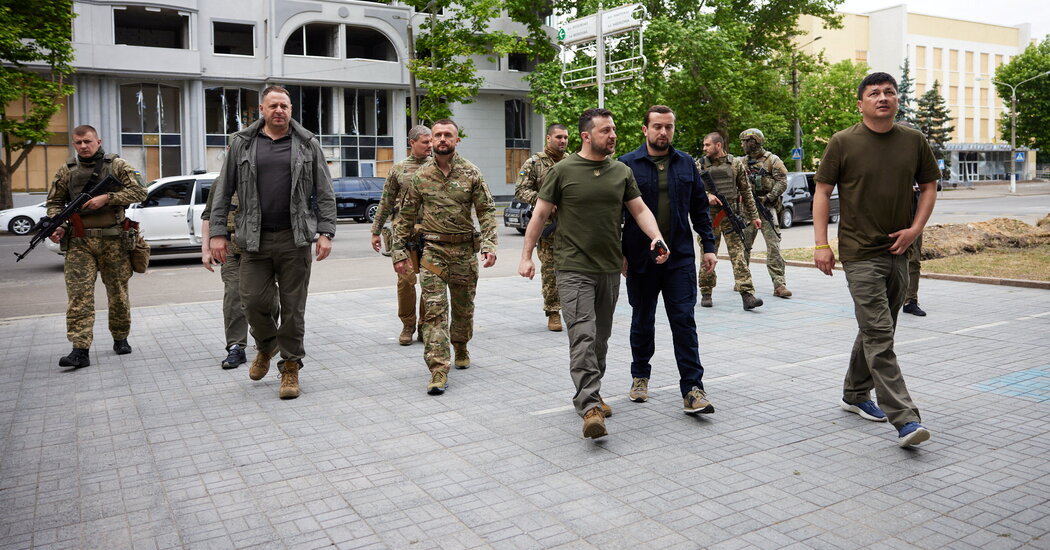 LVIV, Ukraine — President Volodymyr Zelensky of Ukraine on Saturday made unannounced visits to Mykolaiv, a southern Ukrainian city battered by the war that has been held up by Kyiv as a sign of fierce resistance, and the nearby port city of Odesa.

The visit by Mr. Zelensky, his first to the region, came one day after President Vladimir V. Putin of Russia in a defiant address sought to rally support and blame the West for the continuing fallout of the war, as the two leaders battle to convince their citizens and the world that they have the upper hand in the fighting.

In the early weeks of the war, Mr. Zelensky had been a fixture in Kyiv, the Ukrainian capital, often delivering addresses to the nation from easily identifiable locations, as he sought to steady his shellshocked citizenry.

But increasingly, he has ventured closer to the front lines to demonstrate that his forces have a sufficiently firm grip on these volatile areas to allow him to move about safely. The trips have become a tool to lift morale among the troops and the public, and to distract from the terrible losses being inflicted as fierce fighting continues.

Mr. Zelensky made his first trip outside the Kyiv region in late May, when he visited Kharkiv, the country’s second largest city, which had just repelled a determined Russian assault.

While in the city, which he described as having “suffered terrible blows,” he met troops, handed out awards to fighters and described a chance for areas devastated by Russian attacks to “have a new face” when they were rebuilt.

Mykolaiv, a strategically important river port located between Mariupol and Odesa, was seen as a key target of Russia when the conflict began in February. Now, it’s just miles removed from a Ukrainian counteroffensive aimed at retaking the nearby city of Kherson, lost early in the war.

Back then, with Russian forces on the outskirts of the city, it seemed only a matter of time before Mykolaiv would be forced to capitulate as well. But despite a long siege by Russian forces that left the city battered and broken, resistance stiffened.

Even as bodies piled high in the city morgue, residents remained defiant. Weeks after the siege began, Ukrainian forces managed to regain full control of the city, pushing Russian forces back to the southeast.

Footage of the Saturday visit posted to the official Telegram channel of Mr. Zelensky’s office showed the president gazing up at the shell of a nine-story government building that was hit by a missile in late March, killing dozens.In Odesa, he visited an apartment building, where in April eight people, including a three-month-old baby, were killed by a Russian strike.

Mr. Zelensky toured hospitals in both cities and thanked the staff for their work and for treating patients as they would their own families.

His meetings in Odesa — where an opera house opened on Friday for the first time since the Russian invasion began — included discussions on how to export wheat and other agricultural products, which are stuck in Ukraine because of a Russian blockade.

“We will not give away the south to anyone, we will return everything that’s ours and the sea will be Ukrainian and safe,” he said later in his nightly address.

But despite Mr. Zelensky’s effort to project the idea that all is well, Russian forces have continued to fire on Ukrainian positions along the length of the border between the Mykolaiv region and neighboring Kherson, according to a Friday assessment by the Institute for the Study of War. The unrelenting artillery assault is likely to deter Ukrainian counterattacks in the area, the institute said.

And the human toll of the war cannot be wished away, with funerals taking place daily in every corner of the country for soldiers who have died on the eastern front lines. Even in the relative safety of the western city of Lviv, a cemetery for the war dead is filled beyond capacity, with fresh graves being dug outside its original perimeter every day.

It has also become clear that foreign fighters and others who have joined the war effort in Ukraine are facing similar peril.

On Saturday, the family of Grady Kurpasi, 49, a former U.S. Marine Corps officer, confirmed that he was the third American to go missing in the country.

“Grady went over there not to fight but to help the Ukrainian civilians, he unfortunately fell into this,” said George Heath, a friend who was acting as a spokesman for Mr. Kurpasi’s family.

Having tracked his phone to an area occupied by Russian forces, they believe he is being held prisoner.

Earlier in the week, the families of Alex Drueke, 39, a former U.S. Army staff sergeant who served two tours in Iraq, and Andy Tai Ngoc Huynh, 27, also said that the two had gone missing in Ukraine.

On Saturday, a State Department spokesperson said officials had seen the photos and videos of “these two U.S. citizens reportedly captured by Russia’s military forces in Ukraine.” The department has been in contact with the men’s families, as well as Ukrainian authorities and the International Committee of the Red Cross, the spokesperson said, declining further comment.

On Friday, short videos purporting to show the two men were posted on YouTube in which they said in Russian, “I am against war.” It was unclear when the videos were recorded or by whom, but it appeared the men were being coached on what to say.

Mr. Huynh’s fiancee, Joyce Black, said on Friday that after watching one of the videos, she “felt very emotional obviously, but very hopeful and never losing faith.” She added, “I am eager to have him home.”