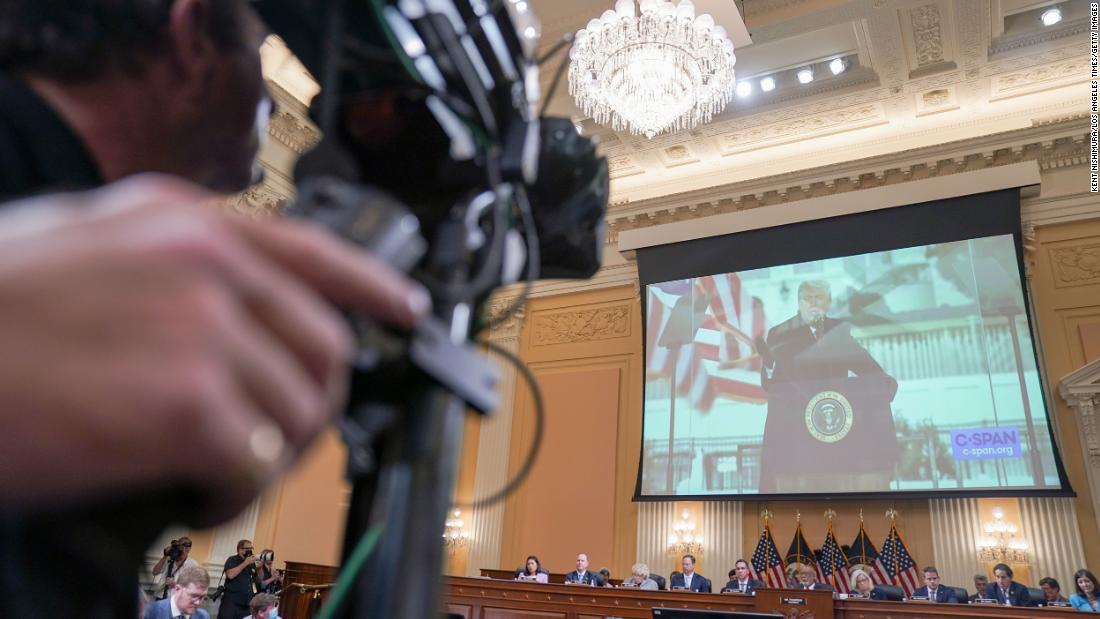 But he seems to be everywhere in the media again these days — everywhere. And it is not just a result of the compelling hearings by the select committee investigating the January 6 insurrection and Trump’s role in it.

Trump’s ubiquity was particularly obvious in coverage of Tuesday’s primary elections. The prism through which the majority of next-day stories in mainstream media was viewed: how Trump-backed candidates fared.

The top of Page One of the Washington Post’s print edition Wednesday carried the headline: “Over 100 GOP primary victors backed ‘big lie.'” The sub-head: “Embracing Trump claims is part of winning formula.” The exclusive also led The Post’s homepage for most of the day.

Television and mobile screens were filled Wednesday with such banners as, “Big Primary Wins for Trump Backed Candidates” and “Trump candidates have mixed success during primaries in several key states.”

Using the vote totals in primaries as an instant barometer of Trump’s influence or lack of it makes sense at some levels, analysts say. But some also question whether that is the best kind of election coverage we can offer. Should that be the primary focus of reports? Is there a danger in framing coverage of crucial midterm elections in terms of Trump?

And the larger question: How is it that this failed 2020 candidate continues to so dominate the media landscape and the national political conversation at a moment when American life is filled with so many challenges?

“The first thing about Trump being so heavily invoked in midterm elections is that it’s very unusual. We usually think of midterms as being a referendum on the current president,” said Robert C. Lieberman, John Hopkins University political science professor and co-author of “Four Threats: The Recurring Crisis of American Democracy.”

Lieberman acknowledged that there is a “fair bit” of such coverage in terms of President Biden’s approval ratings and the “tough place” the economy is in, “but to have the former president hovering so closely over the midterm elections is unusual.”

Furthermore, so much of the coverage is what Lieberman dismissively characterized as a “scorecard of Trump endorsements.”

While there are valid reasons for heavy Trump coverage in the midterms, such scorecard reporting can fail citizens at a time when more informed and in-depth journalism is needed, according to Regina G. Lawrence, associate dean of the School of Journalism and Communication at the University of Oregon and author of “When the Press Fails: Political Power and the News Media from Iraq to Katrina.”

“There’s been a pattern throughout this midterm season of treating each Republican race as a referendum on Trump’s continuing influence. That’s not without some good reason—he IS the biggest figure by far, still, in the Republican party,” Lawrence said.

But that “heavy focus on Trump risks missing other important themes this election season,” she added. “For one thing, it risks missing the rise of any candidates who don’t fit that simple binary. I think voters around the country may be eager to learn more about candidates and races that pivot on more than just Trump. So, in that sense, Trump’s omnipresence is … an unhelpful way of informing people about a really complex moment in American politics.”

Tobe Berkovitz, associate professor of advertising emeritus at Boston University and veteran of 30 years of political campaign advising, also feels this moment in American life calls for more than a focus on Trump endorsements.

“Most political coverage, and this is pre-age-of-Donald Trump, has been obsessed with personalities, obsessed with horse races, obsessed with scandal to the detriment of trying to inform the public about issues,” Berkovitz said. “But right now, people are paying over five bucks a gallon for gas, some families can’t find formula for their infants, there’s a war still raging in Urkaine and inflation is out of control. One would hope that both the politicians and the media would focus more on these.”

The other major reason Trump seems to be everywhere on our screens, of course, is the January 6th hearings.

The Trump-focused hearings have done well in terms of audience: 20 million viewers opening night in prime time and 11 million or so for the first morning session.

There are myriad reasons for that success beyond American viewers liking or hating Trump enough to watch. One reason is the skilled production. The committee made a wise choice in hiring James Goldston, former president of ABC News, as an adviser to help make the proceedings media-friendly without compromising their seriousness.

In tone and structure, they resemble a Netflix true crime documentary series, with teases for what is to come in the next episode and a feel of being backstage as a crime is being plotted. Then, there is another level of formulaic TV familiarity with Trump being depicted in the mold of the amoral, ruthless politician Francis Underwood played by Kevin Spacey in the fictional “House of Cards.”

Televising the hearings is a public service in the best sense of the term. We desperately need to try and document what a danger to democracy Trump has been and continues to be. We need to unravel how the insurrection happened. But even as the committee goes about trying to do that, the telecasts can have the reverse effect of enhancing his stature as a result of his uber presence on our screens.

“As we’ve learned from experience, mainstream media can end up amplifying anti-democratic (little “d”) messages even when they don’t intend to. Paying inordinate attention to Trump adds fuel to the rightwing information ecosystem that supports the larger Trumpian movement and its antidemocratic and white nationalist elements,” said Lawrence.

“That’s not to say that journalists shouldn’t be covering Trump, but that they can find more expansive ways of talking about what’s at stake right now, which may be democracy itself,” Lawrence added.

Lieberman, who has written extensively on democracy, says Trump does matter to the midterms, but not so much as a person trying to pick winners and losers. What matters are the ways the lie he promulgated about a rigged 2020 election are affecting races today – the story the Washington Post targeted in its morning-after coverage Wednesday.

“What’s interesting is less Trump himself than his message of the stolen election that’s running through a lot of the campaigns … at the local and state level,” Lieberman said. “That’s what I find alarming.”