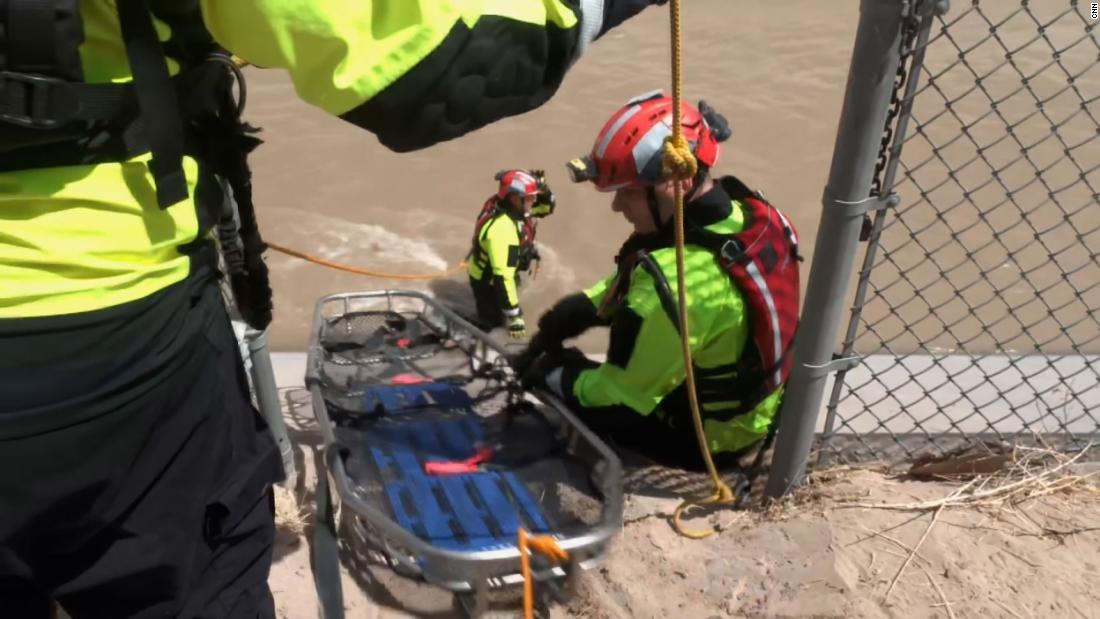 The canal, which runs for miles along the international border, is intended to get water to farmers during the summer months. But as migrants try to cross into the United States, the canal also poses a unique danger, with high water levels and a fast-moving current.

“You get pushed underneath. You get pushed out,” said Kris Menendez, captain of the El Paso Fire Department water rescue team. “It could mean life or death. No doubt.”

Authorities say there have been eight deaths here in the span of a week, signaling a grim outlook for the summer as migrants head to the border in extreme conditions. Already, rescues across the US southern border have outpaced those of the last fiscal year.

Border officials are on high alert, issuing warnings about the sweltering desert heat and crossing dangerous waters. This week, CBP Commissioner Chris Magnus warned of the extreme conditions this time of year, which can put migrants attempting to cross the border at greater risk.

“As temperatures start to rise in the summer, human smugglers will continue to exploit vulnerable populations and recklessly endanger the lives of migrants for financial gain,” Magnus said in a statement. “The terrain along the Southwest Border is extreme, the summer heat is severe, and the miles of desert that migrants must hike after crossing the border are unforgiving.”

Migrants will also try to climb over the border wall and fall in the process. In the El Paso sector, there were more than 229 injuries from October through May from those falls, ranging from ankle injuries to brain injuries. Agents try to render aid themselves and take migrants to hospitals if necessary.

Despite the dangers, migrants still try to cross the US southern border, often to seek refuge. Last month, CBP stopped nearly 240,000 migrants along the US-Mexico border, marking a record high and 2% increase compared with April, according to agency data.

The impact of Title 42

The Trump-era pandemic restriction known as Title 42 remains in effect along the US southern border after a lower court blocked the Biden administration from terminating it. While Title 42 allows authorities to turn away migrants at the border, effectively barring them from seeking asylum, there’s little legal consequence for those who attempt to cross again.

In a recent release, CBP acknowledged that expulsions under Title 42 have contributed to “a higher-than-usual number of migrants making multiple border crossing attempts.” Single adults made up most apprehensions in May, the data shows, though encounters of families and unaccompanied children increased last month compared with April.

“It’s an index, really, of desperation, an index of pain, an index of frustration of not being able to access asylum at our border,” Corbett said.

Mass migration across the Western Hemisphere has fueled a growing number of arrivals at the US southern border. In recent months, a new trend has been taking shape that’s posed a challenge to the Biden administration: An increasing number of migrants are from countries outside of Mexico, Guatemala, Honduras and El Salvador.

Once apprehended, migrants might be released from government custody for a variety of reasons, like their nationalities — which can determine whether the US can easily remove or expel them — vulnerabilities or other limitations. Nongovernmental agencies along the border assist migrants who are released from custody as they travel to their final destinations in the US, where they may have relatives and will continue their immigration proceedings.

“Over the past several months, the numbers have consistently been at 3,000 per week. … So there were nights where we had close to 400 people sleeping here,” he said, while showing CNN one of the major shelter sites, which is set to close this summer amid a shortage of volunteers.

Southern border cities are adjusting to the reality that migration flows won’t slow down. El Paso County is weighing a processing center to alleviate stressed shelters.

“I really believe that this is the new world that we’re going to be experiencing and it’s not going be a temporary situation. Nothing that we do and we’ve done before … none of that is functional,” said County Judge Ricardo Samaniego.

DHS may send migrants to cities away from the border

The Department of Homeland Security, meanwhile, is considering sending migrants to some US cities farther from the US-Mexico border depending on NGO capacity, according to a department official.

As part of ongoing planning to deal with a high volume of migrants, DHS has focused on more efficiently processing those who are released from custody while they go through their immigration proceedings.

The plan would send migrants to Los Angeles, Dallas, Houston and Albuquerque, according to the official, and help alleviate border shelters that have been overwhelmed.

A DHS spokesperson previously told CNN that a decision hasn’t been made.

“Should a decision be made, DHS will continue to closely coordinate with and support cities and NGOs to facilitate the movement of any individual encountered at the Southwest border who is placed into removal proceedings pending the next steps in their immigration proceedings,” the spokesperson added.

Texas Gov. Greg Abbott, in a rebuke of President Joe Biden’s immigration policies, began sending dozens of migrants to Washington who had apprehended at the US-Mexico border and released from custody. After arriving in Washington, migrants have continued to other destinations in the US.

Samaniego bemoaned the partisanship over immigration, stressing that migrant flows are unlikely to subside in the near future.

“What keeps me up at night about what’s going to happen is that it requires a tremendous amount of unity at the local, state and federal government,” Samaniego said.