Two of Pence's advisers will appear as witnesses during the Jan. 6 panel hearing at 1 p.m., which will dig into how Trump 'directly contributed' to riot violence 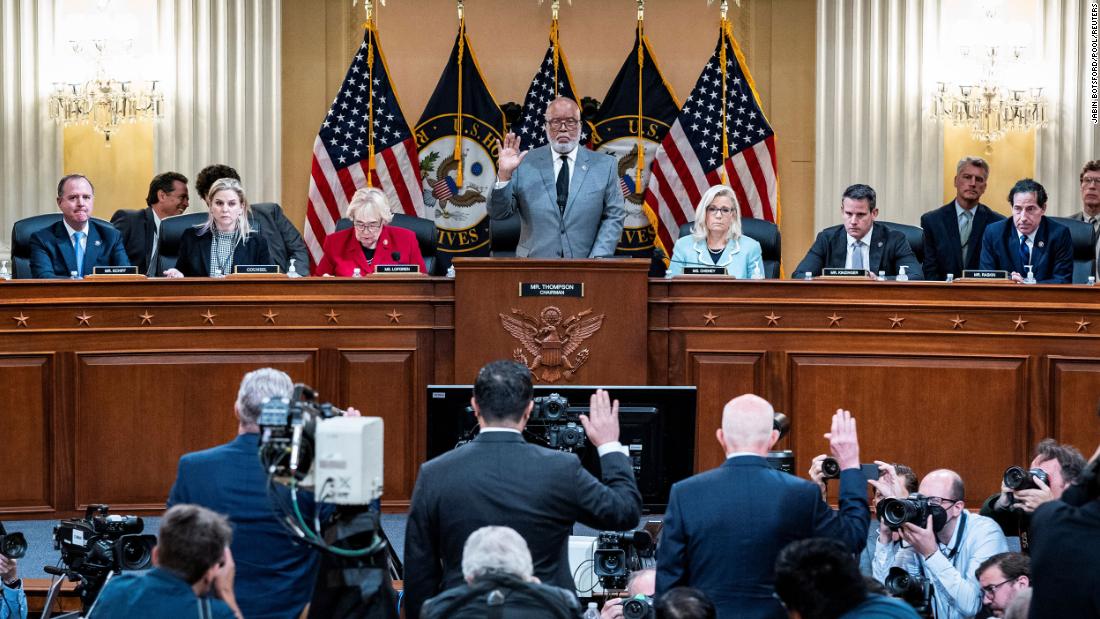 The third Jan. 6 hearing is about to start. So far, we’ve heard compelling testimony and seen gripping video during the first two days of the House select committee’s hearings.

Here are some of the most important things to refresh on before things get underway.

During the first hearing last week, the committee revealed testimony from Trump White House officials who said the former President did not want the US Capitol attack to stop, angrily resisted his own advisers who were urging him to call off the rioters and thought his own vice president “deserved” to be hanged.

It offered a new window into Trump’s demeanor during the riot – something the committee has repeatedly suggested would be a key part of their public hearings.

Vice chair Liz Cheney described testimony from a witness who said Trump was aware of chants to “Hang Mike Pence” and seemed to approve of them.

“Aware of the rioters’ chants to ‘hang Mike Pence,’ the President responded with this sentiment: [quote] ‘Maybe our supporters have the right idea.’ Mike Pence [quote] ‘deserves’ it,” she said.

Cheney has previously characterized Trump’s inaction on January 6 during those 187 minutes as a “dereliction of duty.”

Trump’s team and family turn against him

The committee’s first hearing was bolstered with never-before-seen video clips showing members of Trump’s White House and campaign – as well as his daughter Ivanka Trump and son-in-law Jared Kushner – speaking about how they didn’t believe Trump’s claims that the election was stolen.

Ivanka Trump said that she respected Barr and “accepted what he was saying” about the election.

And the committee cited testimony from Trump campaign lawyer Alex Cannon, who testified he told Meadows by “mid-to-late November” that the campaign had come up empty trying to find widespread fraud in key states that Trump lost. Cannon said Meadows responded to his assessment by saying, “So there’s no there there.”

Democrats reviled Barr when he was in office — accusing him of wielding the powers of the Justice Department to do Trump’s bidding, undermining the Russia investigation, and pushing right-wing conspiracy theories. But over the last two weeks, Barr has become a new hero of sorts for liberals, for aggressively debunking and condemning Trump’s lies about the 2020 election.

The Democratic-run committee has featured clips from Barr’s deposition more than any other witness so far, and they interviewed more than 1,000 people as part of their yearlong investigation. These clips have established Barr as the highest-ranking Trump administration official to affirm the legitimacy of the election results and disavow Trump’s relentless effort to claim that the election was tainted by fraud.

During Monday’s hearing, Barr dismantled specific Trump-backed claims about illegal “vote dumps” in Detroit, nationwide vote-rigging by Dominion with its election machines, and other conspiracy theories.

Unprompted, Barr even went out of his way to criticize “2,000 Mules,” the film created by right-wing activist Dinesh D’Souza, a convicted felon who claims that the 2020 election was stolen. (In a deposition clip played Monday, Barr laughed off the film and said it was “completely lacking” in evidence.)

Barr said the theories Trump supported were “idiotic” and “amateurish” and “detached from reality.” This rhetoric is strikingly close to what top Democrats have said all along about Trump’s fraud claims.

To be clear, Barr is still a hardline conservative. Just a few weeks ago, he made several false claims in a Fox News interview about the Trump-Russia investigation, and backed up Trump’s baseless assertions that the entire probe was a fabricated “hoax” perpetrated by Democratic operatives and the FBI.

One of the primary areas of focus of Monday’s hearing was to underscore the idea that Trump and some of his allies continued to peddle false claims of election fraud after they were personally told those claims were not legitimate.

The committee made the argument that Trump was repeatedly told by his own top officials, including Barr and ex-Trump campaign manager Bill Stepien, that the myriad of fraud claims he was pushing were groundless and were certainly not evidence that the election was stolen.

“I specifically raised the Dominion voting machines, which I found to be among the most disturbing allegations – disturbing in the sense that I saw absolutely zero basis for the allegations, but they were made in such a sensational way that they obviously were influencing a lot of people, members of the public,” Barr said during his deposition, according to a video played Monday.

Yet, Trump and some of his allies continued to push these false claims all the way through January in what the committee attempted to show was a bad faith effort to overturn the election despite consistently being told those claims were not valid.

During their December 2020 Oval Office confrontation, Barr said that Trump gave him a report that claimed “absolute proof” the Dominion voting machines had been rigged. Barr said that the report “looked very amateurish to me,” and he “didn’t see any supporting information” for the fraud claims.

Barr would resign in December 2020 shortly after his last meeting with Trump and was replaced by acting Attorney General Jeffrey Rosen, who also faced a similar barrage of pressure from the former President to investigate the same unfounded election fraud claims that Barr had warned him were baseless.

Ultimately, Trump considered replacing Rosen with a relatively obscure environmental lawyer, Jeffrey Clark, who had demonstrated a willingness to pursue the fraud claims that other senior DOJ officials would not.

Clark drafted a “Proof of Concept memo” for overturning the 2020 election and sent it to top Justice Department officials on December 28, 2020, two weeks after Barr’s resignation. That memo relied heavily on many of the same debunked fraud claims that Trump had already been told had no merit.

At the same time, Trump’s allies were pushing the Justice Department to take Trump’s false stolen election claims to the Supreme Court in an effort to prevent the outcome from several key swing states from being counted. The brief sent to Rosen and other top DOJ officials by Trump’s personal assistant at the White House cited the same report on Michigan voting machine irregularities Barr had told Trump was “amateurish” and failed to include any supporting information.

One of the key details the January 6 committee revealed during Monday’s hearing was how Trump’s lies about the election turned into millions of dollars in fundraising for Trump’s campaign and the political action committee he created after the election.

The panel made the case that Trump’s false claims about voter fraud dovetailed with his campaign’s fundraising effort – resulting in $250 million being donated to Trump and his allies, including solicited requests for an “official election defense fund,” that did not exist.

During the committee’s investigation, went to court to try to pry loose financial documents like bank records that were connected to January 6. Monday’s hearing was the first indication of how the panel plans to use those records in its hearings.

Still, the committee didn’t show a ton of detail about what financial documents it had obtained, and more could be unveiled in the hearings to come.