Opinion: Arrests at Idaho Pride event could be a harbinger of things to come 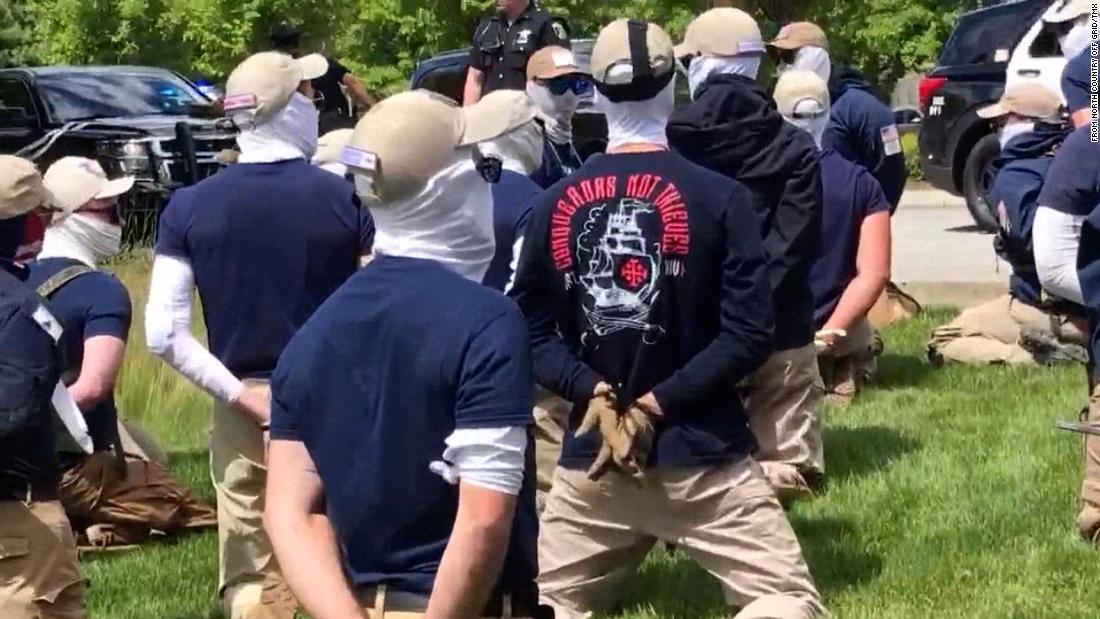 But both the place and the event make sense in the context of a White nationalist movement that combines spectacles of deadly terrorism with efforts to integrate itself into the mainstream right in the US. Those two strands of the movement may seem to be at odds — the lethal violence in Charlottesville, Virginia, in 2017, for instance, helped trigger the collapse of several far-right and neo-Nazi organizations and largely sidelined its organizers — but they have in fact proven to be a potent pairing.
Not only have far-right activists become far more intertwined with the Republican Party, but as the January 6 insurrection and subsequent attempts to minimize it have shown, the Republican Party has become far more tolerant of political violence.
Idaho has been on the leading edge of this alliance. Which makes sense: for decades, the state has attracted far-right groups. Militias, White separatists, Christian nationalists, Aryan Nations and others have viewed the state as a safe haven. It was the state where, a few hours north of Coeur d’Alene, Randy and Vicky Weaver hid out from a federal warrant in 1992, leading to the deadly siege at Ruby Ridge.
And it is the state whose current lieutenant governor, Janice McGeachin, has repeatedly aligned with anti-government militias and White nationalist groups. (As an added bonus, she attempted to usurp the governor’s powers in October 2021 by issuing an executive order while he was out of state, which he immediately rescinded.)
That blurred space between the state GOP and far-right extremists makes Idaho the ideal spot for the Patriot Front, the group formed out of Vanguard America, a neo-Nazi group that largely disbanded in the aftermath of the deadly Charlottesville riot in 2017.
Thomas Rousseau, the founder of Patriot Front, was in Charlottesville as a member of Vanguard America; James Alex Fields, Jr., who murdered Heather Heyer and injured scores more when he rammed his car into a gathering of antiracist activists, had hoisted a Vanguard America shield at the riot earlier that day (though Vanguard America claimed he was never a member).

Patriot Front emerged after Charlottesville because Rousseau believed, having been tarnished by both lethal violence and Nazi iconography, White nationalists needed to rehabilitate their image if they were going to grow the movement. A manifesto for the group leans heavily on patriotic language and old-fashioned Americana, sprinkled with quotes from former presidents and White supremacist heroes like General Robert E. Lee and automaker-and-antisemite Henry Ford.

The group’s symbols are rendered in red, white, and blue, with only small tells that the message is darker than run-of-the-mill patriotism: fasces — the symbol of fascism — embedded in an image of an eagle surrounded by stars, different symbols replacing the 50 stars on the American flags they carry at their rallies.

In that sense, Patriot Front is carrying on the work of the Unite the Right rally in Charlottesville, which sold itself as an effort to bring together different right-wing factions under the banner of free speech. That gathering was billed as a free speech rally aimed at the protection of Confederate monuments.
Richard Spencer, one of the main organizers of the White nationalist event in Charlottesville, understood the real potency of embracing a set of issues that appealed to right-wing Republicans. For the Patriot Front, attacking a Pride event is less about the group’s radicalism than about its efforts to align with the mainstream right, coming as it does at the same moment that right-wing media personalities and politicians are backing anti-gay legislation and carrying out a campaign to demonize trans people. Notably, the Patriot Front has also repeatedly marched alongside anti-abortion activists since 2018.
Nor is Idaho the only place where far-right groups are attempting to work their way into the Republican Party. In Miami-Dade County, the New York Times reports, the local Republican Party is now riddled with Proud Boys, members of a far-right group connected to both Charlottesville in 2017 and the Capitol insurrection in 2021.
That law enforcement was able to disrupt the planned riot in Idaho offers a slim ray of hope. Local police are working with the FBI, taking seriously the types of coordinated conspiracies that constitute a major form of far-right intimidation and violence (see the recent seditious conspiracy charges against Proud Boy members allegedly involved in the attack on the Capitol).
Federal agencies are taking far-right terrorism more seriously, as the recent warning about the potential for increased political violence from the Department of Homeland Security shows, and groups like the January 6 select committee are connecting the dots for the American public between far-right violence and antidemocratic procedural extremism.

Still, those measures are reactions to the growing success of White nationalist and far-right groups in not only engaging in acts of political intimidation and violence but in efforts to embed themselves in the political mechanisms of states like Idaho and Florida. What is happening in Idaho may be a far more advanced version of the far-right Republican alliance, but it is not an aberration — it may be a harbinger of things to come.