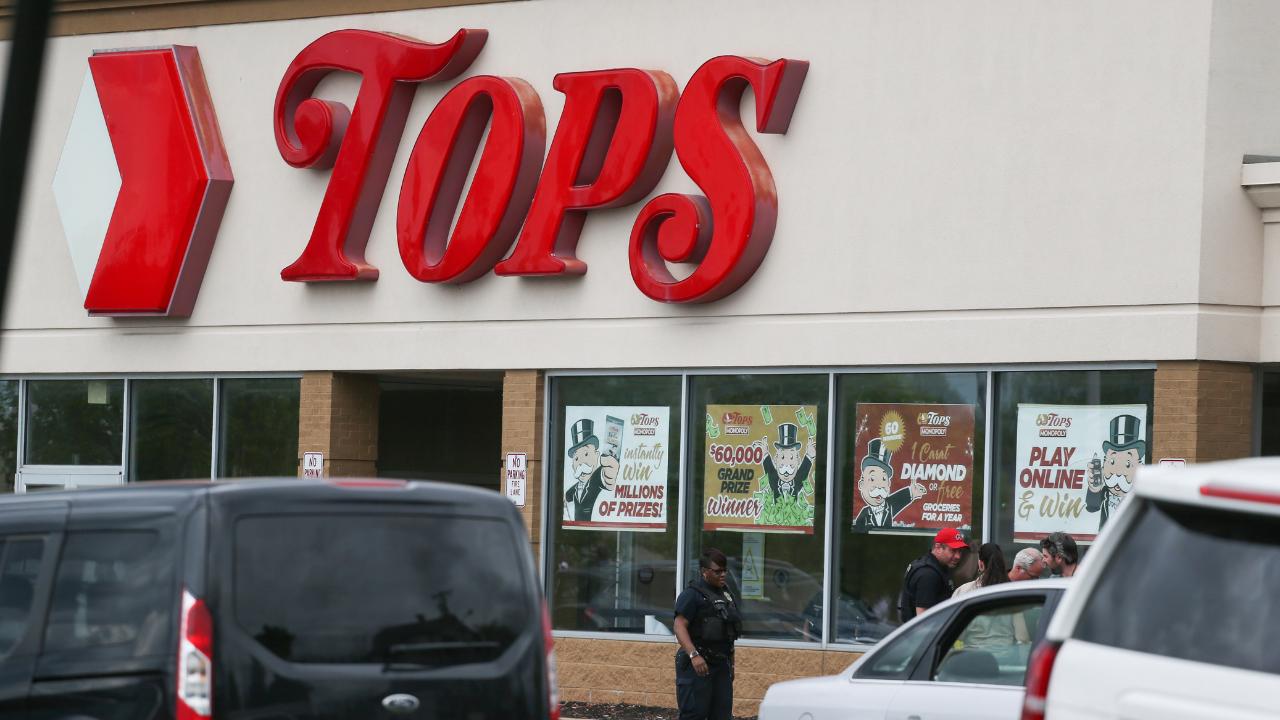 Attorney General Merrick Garland will travel to Buffalo, New York on Wednesday, where he will pay respects to the 10 victims of the Tops grocery store mass shooting.

Garland, alongside U.S. Attorney Trini Ross, will also meet with family members of the deceased and survivors of the attack.

On May 14, suspected gunman Payton Gendron, 18, opened fire in the parking lot of the Tops store, where he killed a security officer before he walked inside and shot 13 people in total.

People pay their respects outside the scene of a shooting at a supermarket in Buffalo, N.Y., Sunday, May 15, 2022.
(AP Photo/Matt Rourke)

Garland and Ross will pay their respects at the site of the shooting before meeting with family members of the victims.

The senior Justice Department official will also hold a press conference at the Apollo Theatre later in the day.

A crowd gathers as police investigate after a shooting at a supermarket on Saturday, May 14, 2022, in Buffalo, N.Y. Multiple people were shot at the Tops Friendly Market. Police have notified the public that the alleged shooter was in custody.
(AP Photo/Joshua Bessex)

TOM COTTON ON SUPREME COURT THREATS: MERRICK GARLAND SHOULD RESIGN IN DISGRACE OR BE IMPEACHED

He was also charged with domestic terrorism and has since pleaded not guilty. Gendron reportedly drove about three hours into the city, from his residence in Conklin, New York, before carrying out the shooting.

Garland’s visit comes amid criticism he is facing from prominent Republicans and conservative lawmakers on Capitol Hill, who have scolded him for not acting swiftly enough to charge those who attempted to murder Supreme Court Justice Brett Kavanaugh.

Sen. Tom Cotton, R-Ark., called Garland “a partisan hack who should resign in disgrace for dereliction of duty,” on “America’s Newsroom” last Thursday.

Merrick Garland, U.S. attorney general, during a news conference on the Foreign Corrupt Practices Act at the Department of Justice (DOJ) in Washington, D.C., US, on Tuesday, May 24, 2022.
(Photographer: Al Drago/Bloomberg via Getty Images)

“A Democratic hitman tried to murder Justice Kavanaugh and his family. On the same day, left-wing street militias announced publicly they would picket his residence and the homes of other conservative justices,” Cotton said. “This act of intimidation is a clear violation of federal law and Merrick Garland has done nothing.”

“His primary job is to enforce the law, and he has failed totally,” the Republican senator continued. “If he won’t resign, then we’ll impeach him once Republicans control the Congress in January. Either way, he is finished.”