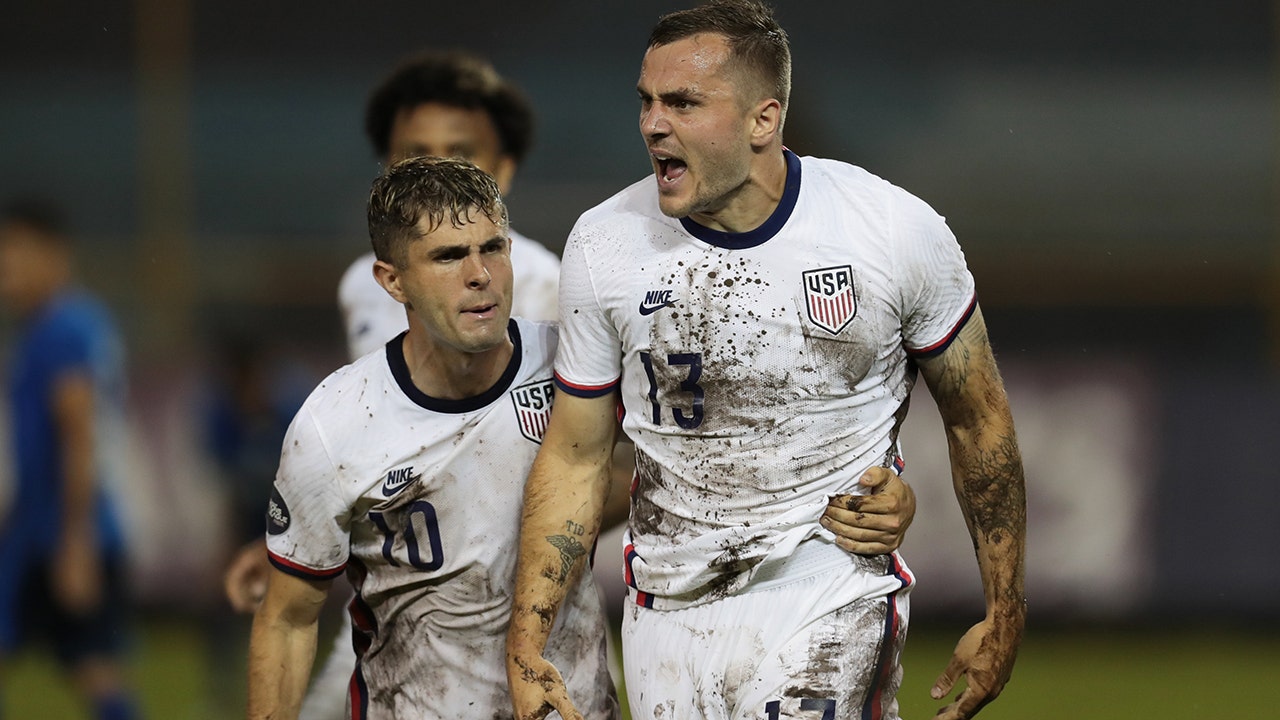 Entering in the 80th minute on a rain-soaked field that looked like a torn-up recreational park, Jordan Morris thought back to youth soccer in Seattle.

Jordan Morris (C) of the United States celebrates with his teammates after scoring during the match between El Salvador and the United States as part of the CONCACAF Nations League at Cuscatlan Stadium on June 14, 2022 in San Salvador, El Salvador.
(Alex Peña/Getty Images)

“These are kind of some of the fields I used to play on as a kid,” Morris said. “Being from Seattle, obviously, it’s not the mud — the rain. I love playing in the rain. So I was just embracing that moment. I think the team as a group just embraced the challenge.”

El Salvador was close to ending a 30-year, 19-game winless streak against the U.S. in this CONCACAF Nations League match. Among the players on the bubble for a Cup roster spot, Morris leapt over Larin to head Luca de la Torre’s cross past goalkeeper Mario González seconds into six minutes of stoppage time.

Morris scored his 11th international goal, his first since November 2019 and first since tearing his left ACL in February 2021.

Players were covered in mud soon after kickoff in San Salvador. Both teams finished a man short.

“The group grows with moments like this,” U.S. coach Gregg Berhalter said. “After the game, Jordan Morris walks into the locker room and everyone starts cheering. Everyone’s uniform is a dark brown color, the shoes are a mess, the staff is all dirty. This is what builds teams.”

American winger Paul Arriola was ejected in the 70th, nine minutes after entering, when he made a sliding tackle that caught Larín on a shin and flipped him. Mexico’s César Ramos, among 36 referees selected for the World Cup, immediately showed the first straight red card against an American since Michael Orozco in the 2016 Copa América third-place match against Colombia.

El Salvador’s Ronald Rodríguez was sent off in the 79th for knocking down Yunus Musah as the midfielder tried to run onto a through ball.

Just two warmups remain for the Americans, exhibitions in Europe on Sept. 23 and 27, likely against Asian opponents. The U.S. opens the World Cup against No. 18 Wales on Nov. 21, faces No. 5 England in a Black Friday matchup four days later and finishes the first round against No. 21 Iran on Nov. 29.

Larín scored after Nelson Bonilla crossed from the right attacking flank to the other side of the field. Larín ran down the ball, took a touch and from a wide angle curled the ball around right back Reggie Cannon. Horvath left his near post completely open, and the ball went past him for Larín’s sixth international goal. Horvath was so far away, he barely moved, and his head drooped.

Horvath, competing for three roster spots along with Matt Turner, Zack Steffen and Sean Johnson, made his eighth international appearance and first in a year. It was his first start for club or country since March 20, highlighting the Americans’ most unsettled goalkeeping pool since the 1980s. Steffen (Manchester City), Turner (joining Arsenal next month) and Horvath (Nottingham Forest) all could be club backups when the U.S. gathers in Qatar.

The U.S. had entered with 19 wins, one loss and six draws against El Salvador, the lone defeat at Estadio Cuscatlán in an exhibition on Feb. 19, 1992. El Salvador coach Hugo Pérez was on the field for the U.S. that night.

Cuscatlán was mostly empty with a crowd of 6,313 after being filled with about 29,000 fans for the opening World Cup qualifier against the U.S. last September, a 0-0 draw.

On a night Christian Pulisic captained the U.S. and played with new blond streaks in his hair, Haji Wright started in the latest audition for Cup roster spots at forward in a competition with Jesús Ferreira, Ricardo Pepi, Josh Sargent, Jordan Pefok and Daryl Dike.

“It’s always difficult when players get an opportunity and don’t fully capitalize on it,” Berhalter said. “It’s not nice for a coach. It’s not nice for the player. It’s not nice for the group. We were all rooting for Haji to be a force. We purposely played more direct in the first half because we thought he could be the force that would unsettle them. And it just wasn’t his night tonight. That doesn’t rule him out for anything in the future. We don’t work like that.”

NOTES: Berhalter is planning a training camp for Major League Soccer players after their teams get eliminated, perhaps having youth national team players join to fill out the group. He also will talk to MLS teams about load management.