Raphael Warnock: I Can Still Hear My Father’s Voice 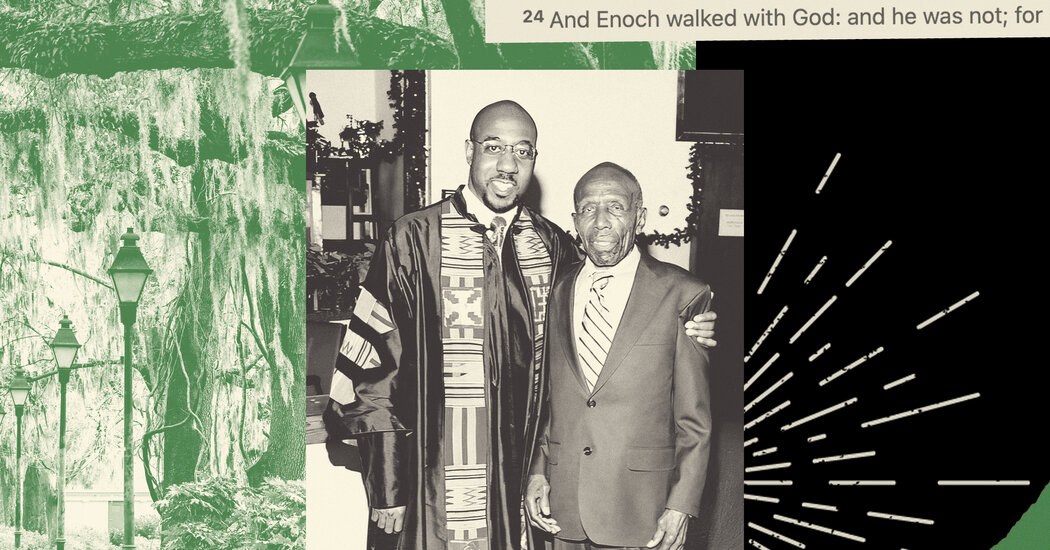 Dad and his helpers all lived to tell the story. And tell it Dad did, after he entered parish ministry in his forties — over and over in his sermons, recounting God’s grace and mercy.

I entered the world on July 23, 1969, the 11th child in our big, blended family. I was never forced to give up my seat on the bus to a white passenger, as my father had been. When he told his children the story, Dad never seemed bitter. It was at his church that I learned to recite the Pledge of Allegiance. In Dad I saw a true patriot who loved his country despite its flaws, a man who never lost faith that his country someday would find a way to live up to its ideals.

All the boys in our family helped in some way in Dad’s hauling business (though my older brothers always claimed I wasn’t required to work as much as they had been). By the time I was old enough to assist, Dad’s business focused mostly on abandoned cars, salvaging their metal at the local steelyard in exchange for cash. Dad would leave his business cards, with his telephone number and the message “We Buy Junk Cars” in large letters, on old cars.

A brilliant, self-educated man, my father even devised his own pulley system to load the cars onto the truck and stack them atop one another. How Dad designed and built different versions of these pulley systems — welding together spare parts of steel on the back of an old Mack truck, safely lifting, loading, stacking and hauling cars — all without any formal training in engineering or physics and without incident, baffles my mind to this day. He took the old vehicles to a small piece of property he owned off the beaten path, next to a railroad track. He then salvaged the metal parts and took them to Chatham Steel Corporation in town for cash. It was grueling work, and sometimes he was so tired when he made it home that his eyes closed while he was chewing at the dinner table. And that was just the exhaustion from his day job.

His work as a pastor came with its own time demands and responsibilities. He preached with clarity and fire. Often using vivid illustrations and recalling the challenges, near-misses and miraculous survival stories of his own life, Dad spoke of a God who walks beside you through life’s dark moments and dangerous valleys. One who never abandons us, especially those who feel forgotten, discarded and lost in a mean, cold world. The junkman who lifted abandoned cars on weekdays, seeing their value, lifted broken people on weekends, convincing them of theirs.

The encouragement and the model he provided propelled me to become the first college graduate in my family. I went to Morehouse College, the alma mater of the Rev. Dr. Martin Luther King Jr., and eventually became the pastor of Ebenezer Baptist Church, where he preached. I remember how proud Dad was when the membership of that church overwhelmingly elected me to serve in June of 2005. I picked up the telephone, wished him a happy Father’s Day and shared my news. My sister later told me that he was so moved he wept.