SpinLaunch wants to radically redesign rocketry. Will its tech work? 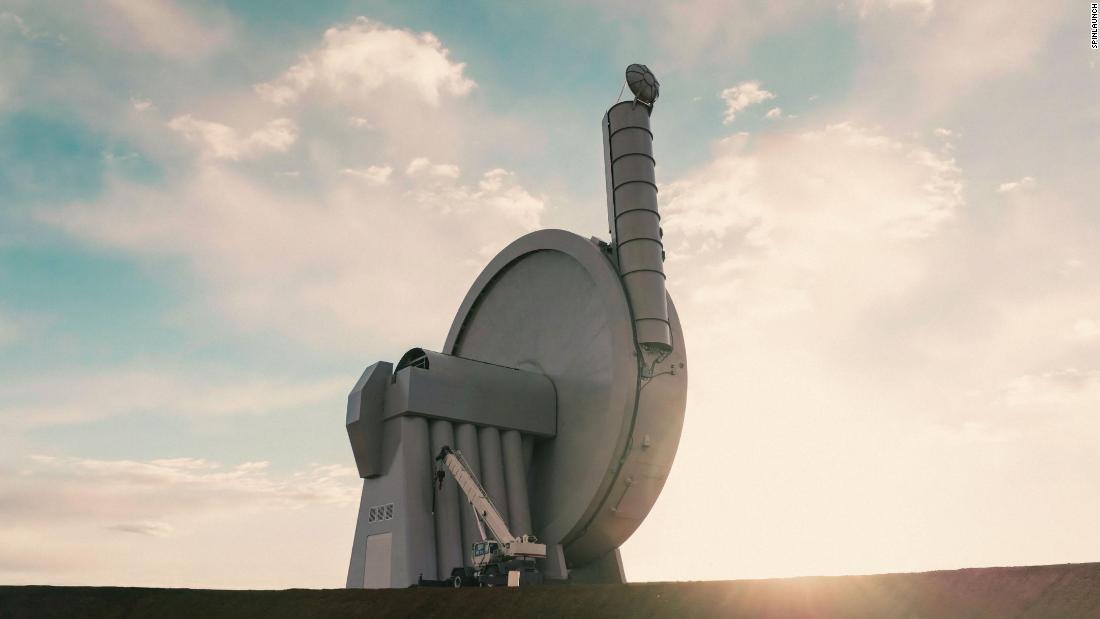 Humanity has been putting objects into orbit for six decades now. This is not how it’s been done.

Is it possible? The answer is different depending on who you ask.

SpinLaunch, as the startup is called, wants to — as the name implies — spin projectiles, using centrifugal force to drum up enough energy to send an object to space. The company plans to use a small rocket, shaped like a razor-sharp ballpoint pen that encapsulates a satellite, and tether it to a motor at the center of a 300-foot wide vacuum-sealed chamber. The rocket would then exit a hatch and tear into the upper reaches of the atmosphere before an onboard rocket motor fires up to propel the vehicle to orbital velocities.

The concept “shares a lot more in common with maybe, like, an amusement park ride than it does with a rocket,” Jonathan Yaney, the CEO of SpinLaunch, told CNN’s Rachel Crane.

So far, the seven-year-old company has completed nine high-altitude test flights using a scaled-down version of the centrifuge it envisions will be necessary to put objects into orbit, a feat that requires speeds greater than 17,000 miles per hour. It’s still the very early stages, and it’s not yet clear if SpinLaunch will be technologically or financially successful.

But the hurdles have not proved large enough to scare off SpinLaunch’s investors, including GV, formerly known as Google Ventures, and Airbus Ventures, which have collectively poured tens of millions of dollars into the company.

Yaney said that the idea for SpinLaunch was born from his desire to reevaluate the past in order to rethink how we might explore the future.

He cites Jules Verne — a science fiction writer who died 50 years before the first satellite traveled to space — as a muse for the origin of SpinLaunch. Verne imagined that massive cannons would fire things into space. Yaney surmises that the reason we use rockets at all is a quirk of history, a byproduct of the Cold War, when advancing weaponry was just as important as putting a satellite into space.

“SpinLaunch was just an exercise in taking a fresh look at how can we use renewable energy and ground based energy to really just do this in a different way,” Yaney told Crane. “I ran about maybe 20 or 30 different scenarios from rail guns to electromagnetic accelerators, to, you know, space cannons, to light gas guns.”

Ultimately, Yaney said, he estimated that a massive centrifuge would be the most efficient.

Traditional rockets require thousands of complex components that are stretched to their mechanical limit during flight and then either discarded or undergo costly refurbishments, Yaney said. A centrifuge can keep all the components needed to work up massive amounts of energy close to the ground — a steadier, more fixed approach, according to Yaney. This means they can use heavy, industrial components and reuse the centrifuge again and again, reducing the overall cost of a mission, or at least that’s the hope.

After spinning faster than the speed of sound, the test projectile is catapulted towards orbit. Credit: SpinLaunch

Is all this possible?

Such a feat is theoretically possible, according to Olivier L. de Weck, a professor of astronautics and engineering systems at MIT. But there are engineering problems that SpinLaunch will need to solve, he told CNN Business. For example, SpinLaunch’s centrifuge could exert upward of 10,000 G’s — or 10,000 times the force of Earth’s gravity — on the satellite being whipped around inside.

“A CubeSat would be torn to shreds,” de Weck said, referring to the small, standardized satellites that have grown in popularity in the public and private sector. (To be clear: humans will never be going into space on a SpinLaunch rocket, according to the company. The G-forces would easily crush the human body.)

SpinLaunch acknowledges that the intense G-forces are an obstacle. On its website, the company says that its engineers have been evaluating the ability of various hardware and components to withstand the forces.

Yaney told CNN’s Crane, however, that he’s confident it won’t pose a significant threat: “The satellites that are designed for rockets generally can also survive in the SpinLaunch environment.”

To get to orbit, SpinLaunch will still need to develop a rocket that can survive being whipped around to 5,000 miles per hour so that, after it exits the centrifuge, it can fire its engine and finish the trek to orbit.

At a factory in California, the company has already built a prototype, which SpinLaunch’s vice president of technology David Wrenn describes as an “aerodynamic dart.”

The rocket-powered projectile won’t be the hard part, according to Yaney. More difficult will be building a centrifuge three times larger than the one it has used for testing so far in New Mexico, which is already the largest vacuum chamber in the world by diameter, Yaney said.

That’s where de Weck is most suspicious. He’s not sold on the idea that SpinLaunch’s technology will be easy to scale up. A centrifuge three times bigger than the system they’re currently using won’t just require three times more power -— it will require 27 times as much power. It’s not impossible, but it will require significant maintenance and cost.

“You can put me in the category of skeptics,” he said. But “they’ve come further than I would have said a year ago and…if I’m proven wrong, that’s great.”

For its part, SpinLaunch confirmed that the full-scale system will require 27 times the power of the scaled-down version.

“That’s about $2,000 of electricity consumed per launch [but] it will also be powered entirely by renewable energy,” the company said in an emailed statement. “And the majority of the energy used during the spin-up process will be recaptured during the spin-down (the same way an electric car regeneratively charges).”

But even if SpinLaunch can prove it can get to orbit, it’ll face stiff competition. There are dozens of startups around the world aiming to create launch vehicles capable of hauling small satellites to orbit, and a few — namely Virgin Orbit, Rocket Lab and Astra — are already operational. Large rocket manufacturers, including SpaceX, are also marketing services to small satellite builders and operators on dedicated rideshare missions.
Space has already become a business domain. Elon Musk’s SpaceX is widely credited for ushering in the era of commercialized access to orbit and drastically reducing the cost of putting satellites into space. Before SpaceX, the price of putting a measly two-pound spacecraft into orbit was more than $8,000, according to data compiled by a researcher for the government-funded Center for Strategic and International Studies. These days, it can be as low as about $1,500.

It’s not clear where SpinLaunch will fall on the price spectrum. But Yaney says SpinLaunch can also stand out because its hardware could be capable of launching up to 20 or 30 times per day, regardless of the weather. SpinLaunch, for the record, is far from the first rocket startup to claim such advantages — but it is the first startup to offer a completely new means of getting to space.

Yaney even admits that up until the company began flight tests a few months ago, even he wasn’t sure that SpinLaunch’s technology would work. But now he’s a true believer.

“SpinLaunch experiences a high level of skepticism by most anybody until they come and spend time with us,” Yaney told CNN, “and you really understand that rockets are actually really crazy. Rockets are the most complex systems ever built as a means of transportation. They’re actually incredibly illogical.”

Is this a good idea?

One thing all launch companies — including SpinLaunch, if it’s successful — will have to grapple with is the growing issue of congestion in outer space. The last several years have seen an explosive rise in the number of satellites humanity is putting in space, and academics and experts are increasingly attempting to raise alarm bells about the risks of objects colliding in space. That could lead to plumes of shrapnel and debris that can render certain fields of orbit impassable.

“It is imperative that we, as a collective industry are able to exercise the utmost responsibility and caution when it comes to protecting this environment,” Yaney told CNN. And the industry is already doing a “fantastic job” taking steps to mitigate the risk, including by giving more satellites the ability to maneuver out of the way of spaceborne garbage.

And despite all the risks and difficulties, Yaney said he wanted to pursue SpinLaunch for the same reason many of the visionaries that exemplify the so-called “new space” industry do: “We expected as a civilization that, following landing on the moon — following the sort of the initial push of the space age some 60 years ago — that [space travel] would follow a natural expansion the way most industries have.”

“I think we all expected that we would have cities on the moon, and we would have space stations and space hotels,” he said. “As a species, I think we just always look up and we say, ‘That’s the next frontier; that’s where we should be.'”