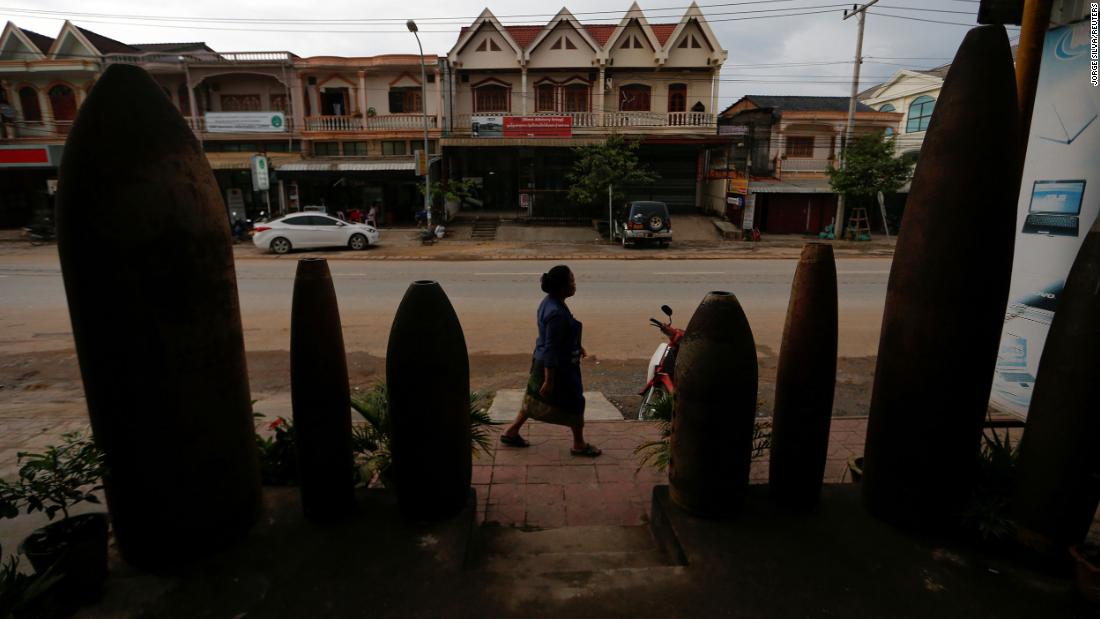 From 1964 to 1973, the US dropped more than 2 million tons of bombs on Laos — about as many as there were people in the tiny Southeast Asian nation. More bombs were dropped on Laos during the Vietnam War than on Germany and Japan combined during World War II. It made Laos — per capita — the most heavily bombed country in history.
The clandestine nature of the war was by design. The CIA, in its effort to destroy communist supply lines between Laos and Vietnam, conducted the bombing in secret. Though the “secret war” in Laos eventually came to light through a 1971 congressional hearing and subsequent media reports, its sheer scale and devastation remain invisible to much of the American public.

“It was called America’s secret war for a reason,” said Aleena Inthaly, chief of staff for the advocacy organization Legacies of War. “I talk to people who grew up in the US, and they have no idea.”

That lack of public awareness was the impetus behind Legacies of War’s newly launched virtual library. Staff members and trustees of the organization combed through a vast array of materials to curate a collection of books, films, documents and other resources that, taken together, help present a more complete picture of what transpired in Laos.

In making the history of the secret war in Laos more accessible, the organization hopes not only to raise awareness about the bombing, but also to bring attention to the damage that has yet to be repaired.

The library captures numerous sides of the war

The idea for the library came about in 2020 after Sera Koulabdara, executive director of Legacies of War, and Jessica Pearce Rotondi, a journalist and author, started chatting on social media.

Rotondi has a personal connection to the secret war, which she explored in her memoir “What We Inherit: A Secret War and a Family’s Search for Answers.” After her mother’s death, a box of letters and CIA documents led Rotondi to start unraveling the family mystery surrounding her uncle Jack, who disappeared during the war in 1972. As she chronicled in the book, her journey across Southeast Asia brought her closer to her late mother and illuminated the toll that the clandestine war took.

As Koulabdara and Rotondi discussed the varying experiences of those affected by the war, they decided to build a library that could capture this range of perspectives, Rotondi said.

The team at Legacies of War started compiling books, articles, documentaries and reports that each told a piece of this history. It was especially important to them that the library include materials accessible to people across age groups and learning styles, Rotondi said.

“We really wanted to make sure this library wasn’t just this hyperacademic thing for students doing one kind of research,” added Rotondi, who serves on Legacies of War’s board of directors.

Among the books included in the library are Joshua Kurlantzick’s “A Great Place to Have a War: America in Laos and the Birth of a Military CIA,” which details the CIA’s involvement in the war, and Pao Lor’s “Modern Jungles: A Hmong Refugee’s Childhood Story of Survival,” a first person account told from the perspective of a 5-year-old boy.
Perhaps the most prized part of the collection, however, is a trove of drawings from refugees who experienced the US bombing firsthand. The hand-drawn illustrations, which were collected by American activist Fred Branfman during his visits to refugee camps in the 1970s, depict the gruesome ways that villagers saw their neighbors and relatives killed.

“We have accumulated, I think, a tremendous amount of information that simply was not there in one place before,” said Mike Burton, who served in the US Air Force during the war and is now board chair for Legacies of War.

Though the library at the moment is exclusively focused on the secret war in Laos, Legacies of War hopes to expand those resources to encompass the bombings in Cambodia and Vietnam.

The secret war in Laos is more than an unfortunate chapter of US history — its ramifications persist to this day.

Of the more than 2 million tons of cluster munitions dropped on Laos, an estimated one-third never exploded. Many of those unexploded weapons, which include bullets, shells, grenades and landmines, still have the potential to detonate, posing risks to the residents of Laos.
An estimated 50,000 people in Laos have been injured or killed by those unexploded weapons since 1964, many of them children, according to the Landmine and Cluster Munition Monitor. For decades, Legacies of War has lobbied for federal funding to assist in the effort to clean up those remnants. The US began providing assistance for the cleanup effort in 1993 and significantly ramped up funding starting in 2010 as a result of advocacy efforts, according to Legacies of War. During his 2016 visit to Laos, President Barack Obama announced the US would provide $90 million in funding over three years.

The organization hopes its new library effort can help keep that momentum going.

“Once someone knows about the war, once you read that firsthand account, once you see those numbers, you can’t look away,” Rotondi said.

As Russia’s war in Ukraine has already left crews working to clear unexploded ordnance and mines dropped by the Kremlin’s forces, and as explosive remnants continue to pose threats around the globe, the team at Legacies of War wants to ensure that what happened in Laos isn’t allowed to happen again.

“Hopefully, this also serves as a reminder that cluster munitions are being used around the world,” Inthaly said. “It’s a problem, and they shouldn’t be used. Period. Because 50 years later, we’re still cleaning them up.”