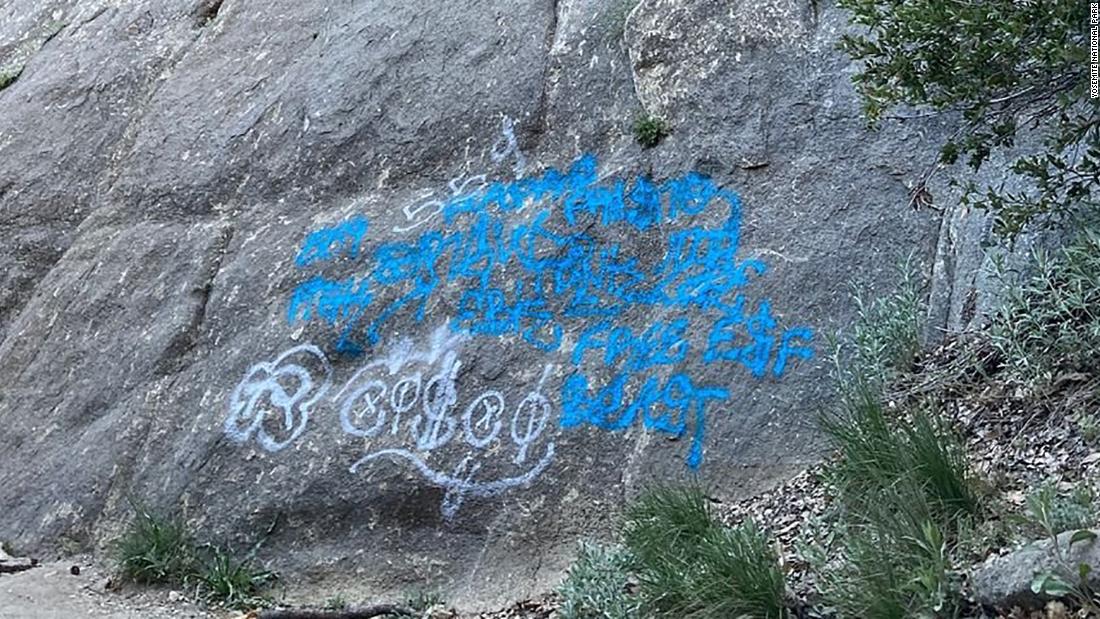 (CNN) — Yosemite National Park officials have asked the public to help them track down the individual or individuals behind graffiti recently painted in the park.

National Park Service (NPS) rangers took to Facebook to share news about the recent vandalism at the popular California tourist attraction and request assistance from the community.

On May 20, rangers received multiple calls about graffiti seen on Yosemite Falls Trail, the park service said in a statement posted on Facebook on June 12.

Rangers discovered around 30 areas of graffiti sprayed painted along the trail. In images shared by the park service, rocks were shown damaged with blue and white spray paint. The graffiti ranged in size from one foot by one foot to as large as eight feet by eight feet.

“If you were on the trail to the top of Yosemite Falls between 6 p.m. and 11 p.m. on May 20, 2022, and saw individuals carrying cans of spray paint, engaging in tagging, or have video or photographic evidence, please let us know by visiting go.nps.gov/SubmitATip,” reads the statement.

Some parts of the graffiti were as much as eight feet high.

This is the latest in a number of graffiti-related incidents reported inside US national parks.

Last December, a group of names were carved into rocks at Texas’ Big Bend National Park, permanently damaging them. The park’s prehistoric stone artworks are believed to be more than 4,000 years old.

“Damaging natural features and rock art destroys the very beauty and history that the American people want to protect in our parks,” Bob Krumenaker, superintendent of Big Bend National Park, said in a statement at the time.

“With each instance of vandalism, part of our nation’s heritage is lost forever.”

Sometimes, the guilty parties are caught.

A Canadian resident identified publicly only as “Steve” owned up to leaving graffiti around several sites at California’s Death Valley National Park in 2020. The man confessed and apologized after seeing images of the graffiti damage on social media.