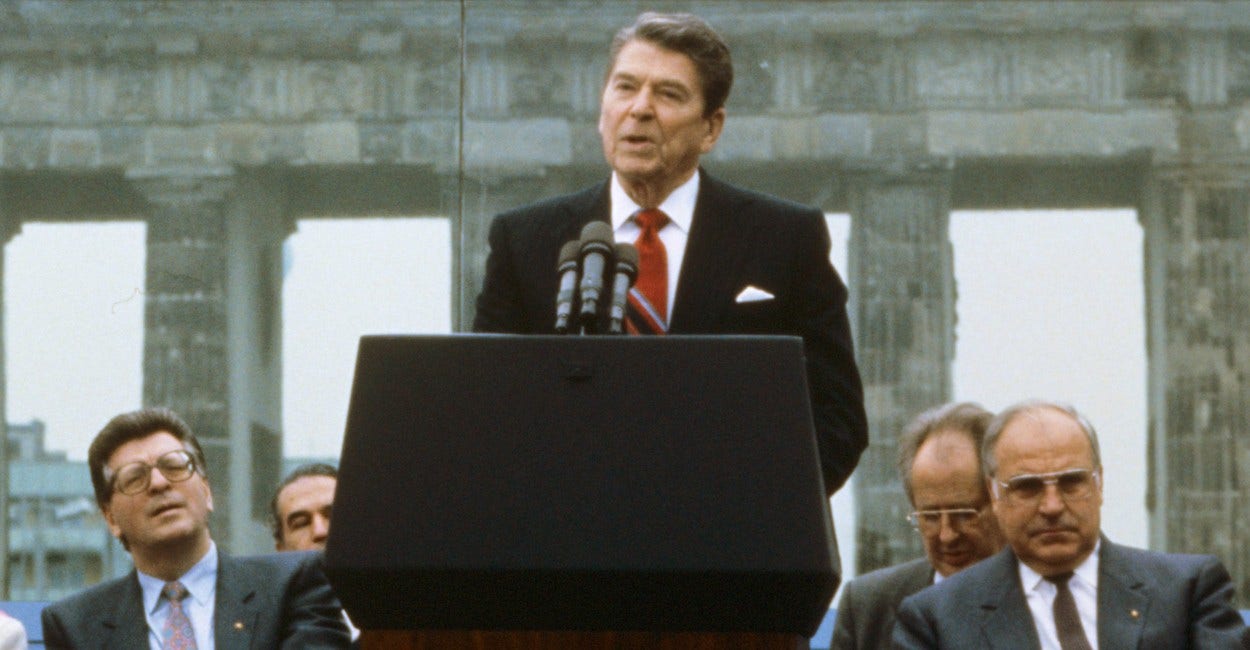 June 12 marks the anniversary of perhaps the most memorable moment of the presidency of Ronald Reagan — his famed “tear down this wall” speech, which he delivered in West Berlin 35 years ago today. Few speeches have been as critical to the perseverance of freedom and democracy across the globe as was this one. With the utterance of one simple global rallying cry — “tear down this wall!” — Reagan ignited a flame that would destroy the Berlin Wall, dissolve the Soviet Union, and kindle free elections that ousted communist regimes throughout Eastern Europe just a few years later.

As moving as Reagan’s words were, their real strength arose from seven years of bold but prudent actions and policies toward the Soviet Union. Reagan spoke those words from an American position of strength, a position that Reagan was always careful to cultivate and maintain in his decisions on how to act toward Soviet aggression and expansionism. Reagan’s approach to dealing with the Soviet Union combined a careful balance between drawing a hard line and knowing when to compromise – when to push hard and when to take a softer, more diplomatic approach.

Reagan’s success in promoting American strength and taking advantage of Soviet weakness arose from his thorough grasp of both world and American history. He understood well how Russian history influenced Soviet goals and ambitions. He studied the policies of his predecessors in office, from Truman to Nixon, to gauge which past policies had worked well and not so well. Reagan saw that America’s responses toward Soviet aggression, whether hardline or more conciliatory, only worked when the United States projected a position of strength and a firm commitment to freedom and democracy.

Reagan allowed the lessons of the past to guide his foreign policy, even when he knew he would face wide public criticism for doing so. This required some degree of boldness and steadfastness on his part. American reporters and even some of his own advisors criticized his anti-détente posturing as being unprecedented and dangerous. While the media and many voters lambasted Reagan’s anti-détente strategy — his belief that the United States could not afford to tolerate, or learn to live with, the existence of this communist alliance — the president, risking everything, marched onward unphased.

FILE — Reagan is pictured waving to well-wishers on the south lawn of the White House on April 25, 1986.
(REUTERS/Joe Marquette)

The result of Reagan’s seven years of prudent boldness was an economically and militarily decaying communist state. Even Soviet Union President Mikhail Gorbachev (whom Reagan considered to be reasonable and open to reform) realized that the time was fast approaching when the literal and figurative walls separating East Germany from the West must come down. Reagan’s consistent mastery at balancing diplomacy and military strength made his direct appeal to Gorbachev actually effective rather than just stirring rhetoric.

Now, however, 35 years after Reagan’s historic speech, Russia — a former republic of the Soviet Union — appears intent on expanding anti-Western sentiment around the globe in ways that the world has not experienced since the Cold War.

After Moscow’s invasion of Ukraine, politicians of all stripes have engaged in endless debate over how best to respond to its military aggression and predatory geopolitical ambitions. This process should begin with examining the careful, meticulous studying and planning that went into Reagan’s Cold War strategy.

Reagan used the lessons of the past as his weapon of choice to defeat the Iron Curtain. With Russia’s invasion of Ukraine rekindling past hostility, it is fair to ask if the present-day American leaders are doing the same.

Have America’s leaders been using the lessons of history to guide their actions toward Vladimir Putin, or are they allowing ideology and gut instincts to drive these decisions?

Are America’s leaders learning from the successes and failures of America’s actions and policies during the Cold War as they consider responses to Russia’s aggression, or are they relying on blind intuition instead?

While some analysts, politicians, and pundits have argued that Russia is acting contrary to the tide of history, the reality is that it is behaving very similarly to the 20th-Century communist nations that fell before it. And so, the most effective way for the U.S. to assess how it can halt its aggression is by learning what strategies worked — and didn’t work — before.

This approach worked for Reagan. Here’s hoping that current leaders allow it to work again.

Christopher Burkett, Ph.D., is associate professor of Political Science and director of the Ashbrook Scholar program at the Ashbrook Center, an independent center at Ashland University that seeks to eliminate bias in education through the study of primary-source documents.