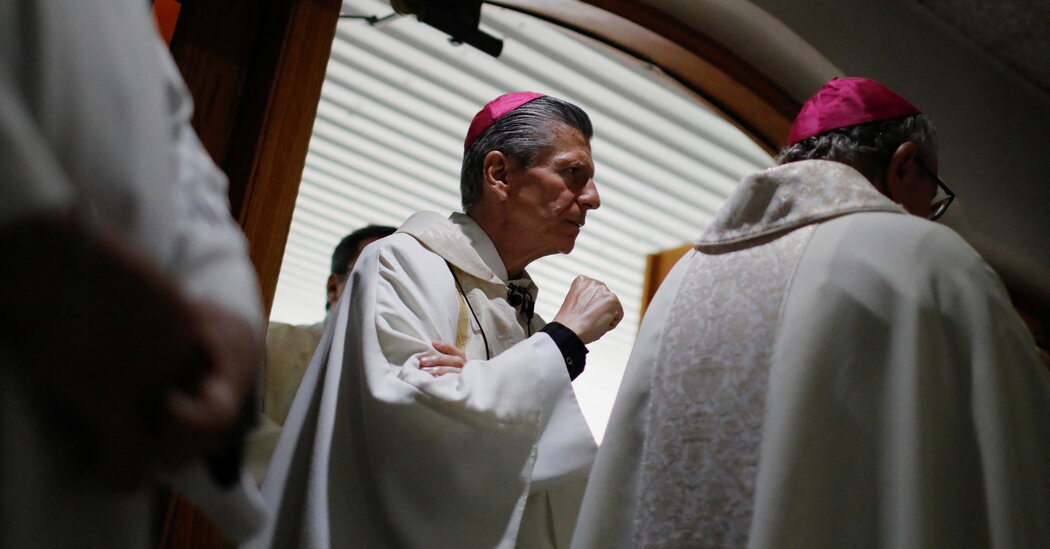 UVALDE, Texas — The day after an 18-year-old gunman massacred 21 students and teachers at an elementary school, state political leaders expressed fury over the shooting but quickly swatted away the possibility of new gun laws to stem further violence. Archbishop Gustavo García-Siller was listening.

When the media briefing at the local high school was finished, he made a spontaneous and impassioned appeal to some of the many reporters who had swarmed into Uvalde: The nation must overhaul its gun laws, limiting access to weapons designed to maximize carnage and suffering, he said. It must also abandon what he described as an unsettling cultural embrace of violence these weapons represented.

“We have to!” said Archbishop García-Siller, who leads the Archdiocese of San Antonio. “We’re supposed to promote life, the life of people.”

Since the attack, the archbishop, whose vast domain of roughly 796,000 Catholics includes Uvalde, has emerged as one of the most visible and vocal gun control advocates in South Texas.

He has delivered sermons, spoken at public gatherings, appeared on national television, and given interviews to local and international journalists. He has argued that demanding changes to gun laws is no different than the Roman Catholic Church’s opposition to abortion or capital punishment, joining a collection of bishops who have pushed for the church to stake out a more forceful position in the debate over firearms.

Yet unlike some others, he is making that case in a place where guns are deeply ingrained in the culture, and most public leaders boast of their allegiance to the Second Amendment.

“We have made guns an idol in this country,” Archbishop García-Siller said in a recent appearance on MSNBC. “I believe with my whole heart that gun control has to take place in a more radical way.”

For the most part, the archbishop has been consumed with trying to shepherd a grieving community, making the hourlong drive to Uvalde from San Antonio again and again in recent weeks — leading Masses and presiding over funerals. He huddled with teenagers who lost their parents. He was also asked to counsel the mother whose son shot his grandmother and then stormed Robb Elementary School on May 24.

Still, speaking out also felt like part of his mission, even if he knew not to expect an entirely receptive audience within his archdiocese, which is spread across nearly two dozen counties around San Antonio.

Asked in an interview with The New York Times how to reconcile his call to the community with its longstanding embrace of guns, his answer was abrupt. “You cannot reconcile guns with life,” he said.

Gun control activists said he was speaking up at a pivotal point, as they held onto a sliver of optimism that the anger and anguish from the shooting could lead people to reconsider longstanding views on gun rights.

“It gives Christians — Catholics, in particular — a moment of pause as they notice the dissonance,” said Johnny Zokovitch, the executive director of Pax Christi USA, a Catholic organization advocating nonviolence, noting how the archbishop’s comments “stand in sharp contrast to the political leadership in Texas.”

In sermons, Archbishop García-Siller, 65, can be soft-spoken. In conversation, his voice sometimes barely registers above a mumble. But the archbishop’s position has been unflinching. It also has been, in some ways, unsurprising.

In over a decade as the archbishop in San Antonio, Mr. García-Siller — a native of San Luis Potosi, in central Mexico — has developed a reputation for speaking out on social issues, particularly in support of undocumented immigrants. He also rankled conservatives in 2019 after a gunman targeting Latinos opened fire in a Walmart in El Paso, issuing a call on Twitter for President Donald J. Trump to “stop racism, starting with yourself.” (He later deleted the post and apologized for criticizing an individual instead of focusing on the larger issue.)

“He’s known as taking a more progressive, pro-immigrant type of stance,” said Jacob Friesenhahn, who leads the religious studies program at Our Lady of the Lake University, a Catholic school in San Antonio.

A contingent of conservative Catholics argues that the church’s teachings, including on self-defense and preserving the common good, justify owning and carrying a gun. But scholars said that Archbishop García-Siller’s position is arguably more aligned with Catholic teachings and represents a forceful stance among Catholic leaders that has grown out of their exasperation over unremitting violence.

“I don’t think he’s going out on a limb at all,” said Father Dorian Llywelyn, a Jesuit priest and the president of the Institute for Advanced Catholic Studies at the University of Southern California. “It’s not like he’s making some radical new statement.”

Other Catholic leaders have spoken out against guns in the days since the Uvalde massacre. Bishop Daniel Flores of the Diocese of Brownsville, Texas, said on Twitter, “Don’t tell me that guns aren’t the problem, people are.” Cardinal Blase J. Cupich, who, as archbishop of Chicago, has become one of the Catholic Church’s most persistent critics of gun violence and the forces behind it, acknowledged that efforts for change might feel futile given the recurring bloodshed.

“The size of the crisis, and its sheer horror,” Cardinal Cupich said in a statement, “make it all too easy to toss up one’s hands and declare ‘nothing can be done.’ But that is the counsel of despair, and we are a people of hope.”

In a letter to Congress responding to lawmakers’ efforts to enact some gun control measures, several bishops urged elected officials to pursue “concrete action to bring about a broader social renewal.”

“Among the many steps toward addressing this endemic of violence,” they wrote, “is the passage of reasonable gun control measures.”

The reaction to Archbishop García-Siller’s position on guns among Catholics in South Texas has been colored not only by long-held political beliefs and their horror at the Uvalde shooting but also their views on how and when it is appropriate for church leaders to wade into such a heated and seemingly intractable debate.

“That’s an issue for politics,” Carlos Zimmerle, 54, said after a recent Mass at a Catholic parish in San Antonio’s West Side. “Not for religion.”

To others, he was simply giving voice to the painful emotions stoked by horrifying violence.

“The archbishop is like all of us,” said Daniel Casanova, 66, a gun owner who worships at a parish in Helotes, a town of just over 9,000 people northwest of San Antonio. “We are human, and I think he sees the hurt that we all are seeing.”

Scholars and other Catholics say the influence of church leaders has diminished in recent years, eroded by institutional failures in responding to sex abuse and a societal shift away from traditional religious worship. By taking such an firm position on guns, Archbishop García-Siller is testing the sway he has among his flock.

But beyond that, the response to the archbishop shows the vast spectrum of opinions now coexisting inside the Catholic Church.

Nancy Kaluza, who worships in Helotes, said she thought the archbishop had a right to speak his mind and largely agreed with him.

Raymond Remirez, 59, said he understood why the archbishop brought up the issue. But Mr. Remirez, who does not own a gun, was seriously considering buying one.

He rattled off a list of shootings, including the one last month at a grocery store in Buffalo and another in 2017 at a Baptist church in Sutherland Springs, a community outside San Antonio. “It could happen here,” Mr. Remirez said. “I’d rather be judged by 12 than be carried by six.”

But the archbishop said that his mandate was to offer moral clarity to inspire compassion and change.

In between vigils and meetings with victims’ families in Uvalde, he has visited Catholic schools scattered across South Texas for end-of-year festivities. He also gave a special sermon for children at a recent Mass at Sacred Heart, the Catholic parish in Uvalde.

In interviews, he refers repeatedly to what he had heard from elementary-age children navigating such a confounding moment. One student, he said, asked if they should pray for the gunman and his family. Another said he believed God would help them. “We’re going to be OK,” the archbishop remembered the child saying.

“Oh, my goodness — whoa,” Archbishop García-Siller said, taken aback as he recalled the interaction. He shared a line from the Gospel of Matthew he has repeated often lately: “Let the children come to me.”

In confronting a subject as contentious as gun laws, he said, wisdom could also be drawn from the children whose lives were lost.

“Can we let the little ones come to us? Can we pay attention to them?” the archbishop said. “These innocent ones who died become the source of light to us — to live better, and to do better.”