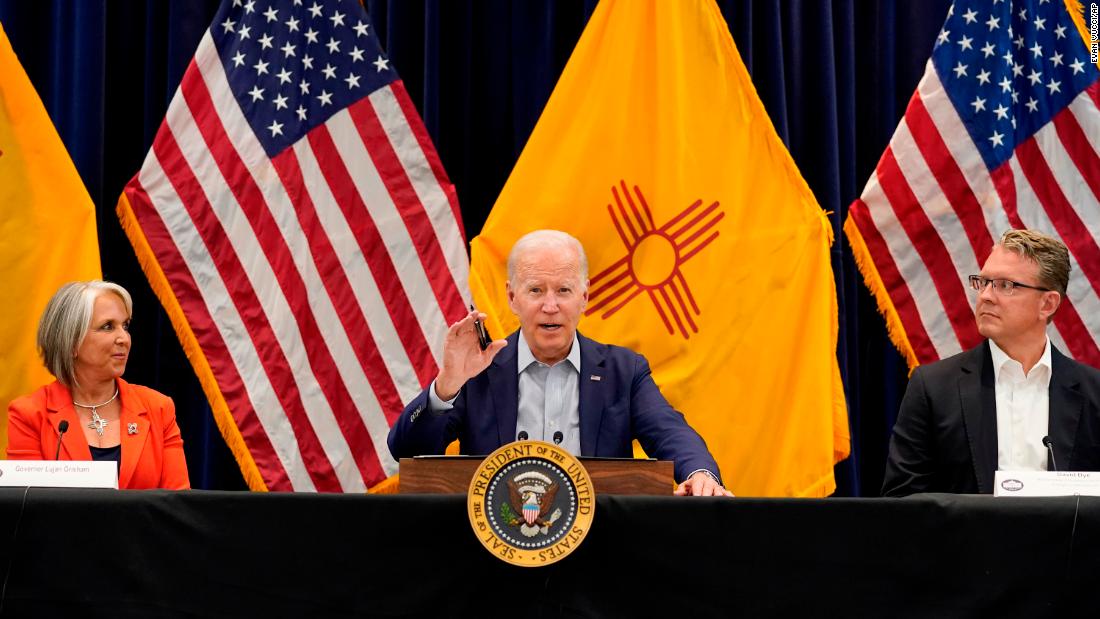 “I think we have a responsibility as a government to deal with the communities who are put in such jeopardy. And today I am announcing that the federal government is covering 100% of the cost,” Biden said to applause in Santa Fe.

The fire, which is at over 300,000 scorched acres, is the largest wildfire ever in the state. Additionally, the Black Fire continues to burn in New Mexico and is the second-largest fire in state history, with more than 298,000 acres burned — meaning the two largest fires in state history have occurred in this record-paced wildfire year and are still burning.

Forest Service investigators determined last month that a holdover fire from January caused the Calf Canyon Fire that’s been burning in New Mexico for over a month and a half. The Calf Canyon Fire later merged with the Hermits Peak Fire, which was caused by spot fires from prescribed burns.

Biden reiterated Saturday that the Forest Service has put a complete pause on prescribed burns, saying that “99.8% go as planned, but this time, tragically, it did not.” The Forest Service is conducting a 90-day review, which will be made public.

“This needs to happen, and I’ll be briefed on the results, and we’ll brief the world on the, the country on the results,” the President promised as he received a briefing on the fires from state and local officials in Santa Fe.

Prescribed fires are often used to manage vegetation, reduce hazardous fuels near residential communities, minimize the spread of pest insects and diseases, improve habitat for threatened and endangered species and recycle nutrients, according to the Forest Service. They’re also essential tools in helping reduce the threat of extreme fires in the future.

In a more light-hearted moment earlier in the briefing, Biden said of New Mexico Gov. Michelle Lujan Grisham, a Democrat and former congresswoman, that “when she asks for something, I just say yes.” To which Lujan Grisham quipped: “(Can you get) the legislature to do that?”

Biden also described his flight around the perimeter of the fire while aboard Air Force One en route to New Mexico from Los Angeles, reflecting on its overwhelming size and saying parts of it looked like a “moonscape.”

“We flew the perimeter of the fire, and it’s an astounding amount of territory and the impact on families that have been there for so long was so consequential, ” Biden said.

So far, in 2022, more than 825,000 acres have burned in New Mexico, which is about four times the yearly average for the state.

“We have a responsibility to help this state recover, to help the families who have been here for centuries. … Governor, let me be clear: We will be here for you in response and recovery for as long as it takes,” Biden said.

The President later met with first responders and survivors of the fires behind closed doors.

Lujan Grisham, speaking ahead of Biden, urged the federal government to continue to accept responsibility for the Forest Service’s role in starting in the Calf Canyon/Hermits Peak Fire.

“This one was not caused naturally. Your administration has leaned in from the very beginning, not only identifying how the fire was caused by actions by the US Forest Service, but recognizing that we need to do things differently, together,” the governor said.

CNN’s Paradise Afshar and Christina Maxouris contributed to this report.