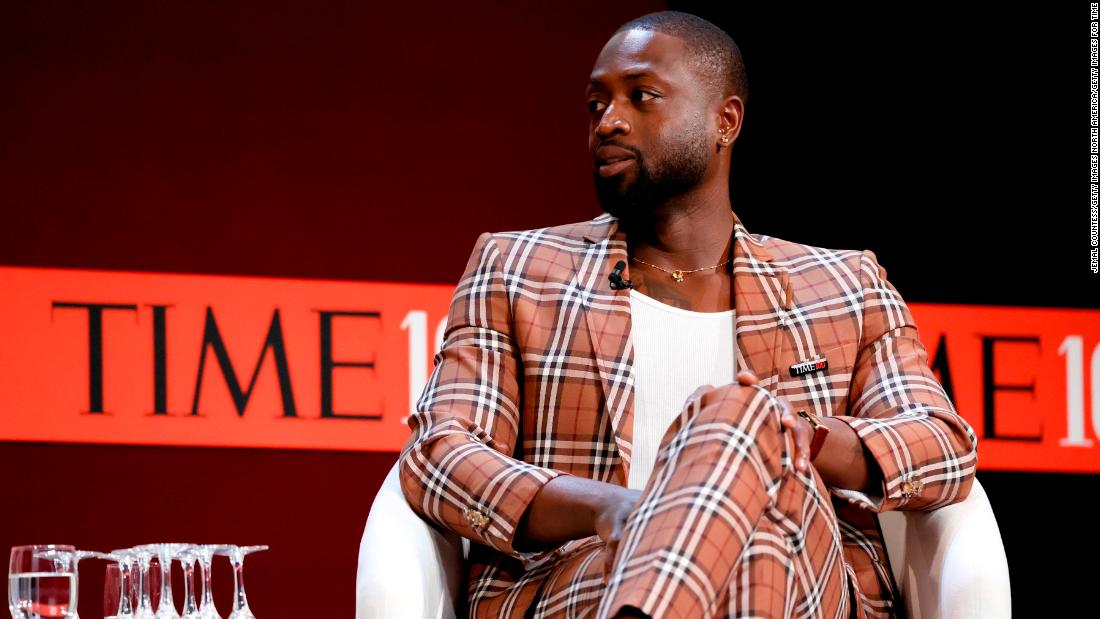 “My kids going to school right now doesn’t allow me to sleep at night very well because of guns,” Wade told CNN’s Poppy Harlow at the Time 100 Summit. “Guns have not been a positive for my family at all. I’ve lost a few cousins to gun violence.

“I grew up in the inner city. I had a lot of cousins that were in gangs that I lost, but I lost a lot to senseless acts of gun violence. My cousin was taking her kids to school and got gunned down and so, for me, when you’re a parent everything goes out the window of whatever your thoughts are, your beliefs are.”

Growing up, Wade says it was thought that being at school was “the safest place to be” for children. He believes that is no longer the case and says his thoughts are often consumed by what could happen to his kids at any moment.

Sitting at the Summit in New York, he admits feeling afraid at being so far away from them in their Los Angeles home.

The former Miami Heat star, who amassed three NBA championship rings and 13 All-Star appearances during a 16-year, Hall-of-Fame-worthy career, recalls recently attending his daughter’s school recital. Wade says he was so preoccupied with a potential shooting that he was unable to enjoy the performance.

As the shooting in Uvalde was unfolding, Wade sent an impassioned tweet aimed at US lawmakers, pleading with them to make changes. “It’s a tragedy!” he wrote. “Why have all that power and not do everything in your POWER — to protect our children and our elderly.”
Since the shooting, lawmakers have faced increased calls to enact meaningful gun legislation reform. At Tuesday’s White House press briefing, actor Matthew McConaughey, a Uvalde native, called for universal background checks, raising the minimum age for purchasing an AR-15 to 21, a waiting period for purchasing AR-15s and the implementation of red flag laws.

Wade acknowledges, “This world is run by money and power,” and says he feels “we’re losing” in efforts to change gun laws.

“So for me, it’s like: ‘Listen, let’s just take all the politics out … let’s take all that out. We’re human. This is a human act that is happening and it’s sad.'”

Wade lists his transgender daughter, Zaya, as one of the most influential people in his life.

Zaya, now 15, told Wade and his wife, Gabrielle Union, that she was bisexual when she was eight years old and then transgender when she was nine, before coming out publicly in 2020. Wade says he was in awe of her bravery.

“[She] had a list of the people she wanted to tell, the people she didn’t want to tell and the reasons why. Immediately, I realized at that point that I could not parent Zaya the way that I parented Zaire [his son], right? Bisexual. At that moment, we sat down and this is the point where I couldn’t have the ‘Kid Conversation.’ I had to change my conversations with my child.

“I started having to have a little bit older conversations with her about life and really get a chance to understand because she knows things about herself that I don’t know … and I’m still learning and there’s still information out here, but just to sit down with her and show her that I’m concerned and I care, that I want to know more, that I want to learn.

“I think that was the thing that kind of made her relax, a little calm, a little bit more comfortable coming to me. She tells me things and I have to listen to her because this is her life. I’m just the person that’s put on this world to be able to help her navigate through it in the best way that I know how, but this is her life and it’s my job to help her get to find her.”

On Monday, the state of Louisiana banned transgender women and girls from competing on sports teams consistent with their gender at all public and some private elementary and secondary schools and colleges.

Louisiana now joins a growing list of states that have enacted such bans in recent years, including at least six in 2022 alone. Wade calls these bans “a joke” and says the lawmakers involved in these decisions are ignorant to the impact they’re having on people.

“This is our life, we live this,” Wade says. “So when you’re out there making rules and if you’re not experiencing this, if you’re not living this, and you’re just out there signing away and making laws, that’s not right, that’s a joke. Come and live a day in my world with my daughter, come and see how it is to walk through this world as her.

“I just think we’re losing our humanity, we’re losing the human side of us. As blessed as my daughter is to have parents who can support her, I’m still afraid every moment she leaves her house — and not just because of gun violence, but because of the way that people perceive her in this world.”