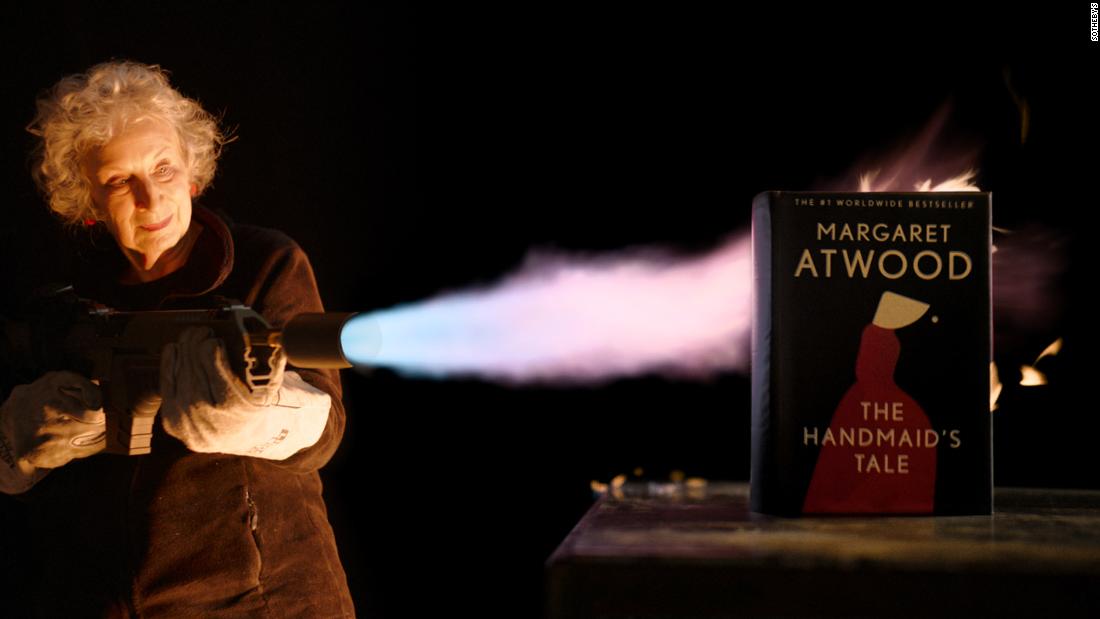 Margaret Atwood’s “The Handmaid’s Tale” has often provoked controversy, facing book bans over the decades since its release in 1985.

Now in efforts to raise awareness around increasing censorship and a surge in book-banning efforts in American schools, Atwood and publisher Penguin Random House have released a single “unburnable” copy of the seminal novel, a dystopian tale about a theocracy that forces fertile women to bear children for the privileged.

And it’s been tested by Atwood with an actual flamethrower.

“I never thought I’d be trying to burn one of my own books… and failing,” she wrote on Twitter, adding it was her “first time” using the device.

Margaret Atwood using a flamethrower on the “unburnable” version of “The Handmaid’s Tale.” Credit: Sotheby’s

The fireproof version is being auctioned by Sotheby’s New York on Wednesday with a high estimate of $100,000. Proceeds will go towards PEN America, a literary and free expression advocacy organization, which recently released a report finding that 1,586 books were banned in US schools over a nine-month period from July 1, 2021 to March 31, 2022.
Texas led the country with the most book bans — 713 — affecting 16 school districts, the report said. Last year the state’s governor Greg Abbott called on school boards to remove books he described as “pornography.” Pennsylvania and Florida had 456 and 204 bans, respectively. PEN America defines a book ban as “any action taken against a book based on its content” that leads to the removal or restriction of a previously accessible title.
“The Handmaid’s Tale” was among titles targeted for sexual or health-related content, while a “disproportionate” number of bans focused on stories relating to LGBTQ+ people and people of color, according to PEN America. Such bans reflect a broader conservative movement to restrict how subjects like race, gender and sexual orientation are taught in public schools.

Upon first glance, the special edition looks like any other printed paper-and-ink work, but it is made of nickel wire, stainless steel, aluminum and fire-resistant inks. It was created by the graphic arts studio The Gas Company Inc. and creative agency Rethink.

“‘The Handmaid’s Tale’ has been banned many times,” Atwood said in a press release announcing the sale. “Let’s hope we don’t reach the stage of wholesale book burnings, as in ‘Fahrenheit 451’,” she added, referencing the acclaimed 1953 novel in which books are destroyed to preserve a totalitarian version of America. “But if we do, let’s hope some books will prove unburnable — that they will travel underground, as prohibited books did in the Soviet Union.”

Suzanne Nossel, the CEO of PEN America, added, “In the face of a determined effort to censor and silence, this unburnable book is an emblem of our collective resolve to protect books, stories and ideas from those who fear and revile them. We are thankful to be able to deploy the proceeds of this auction to fortify this unprecedented fight for books.”