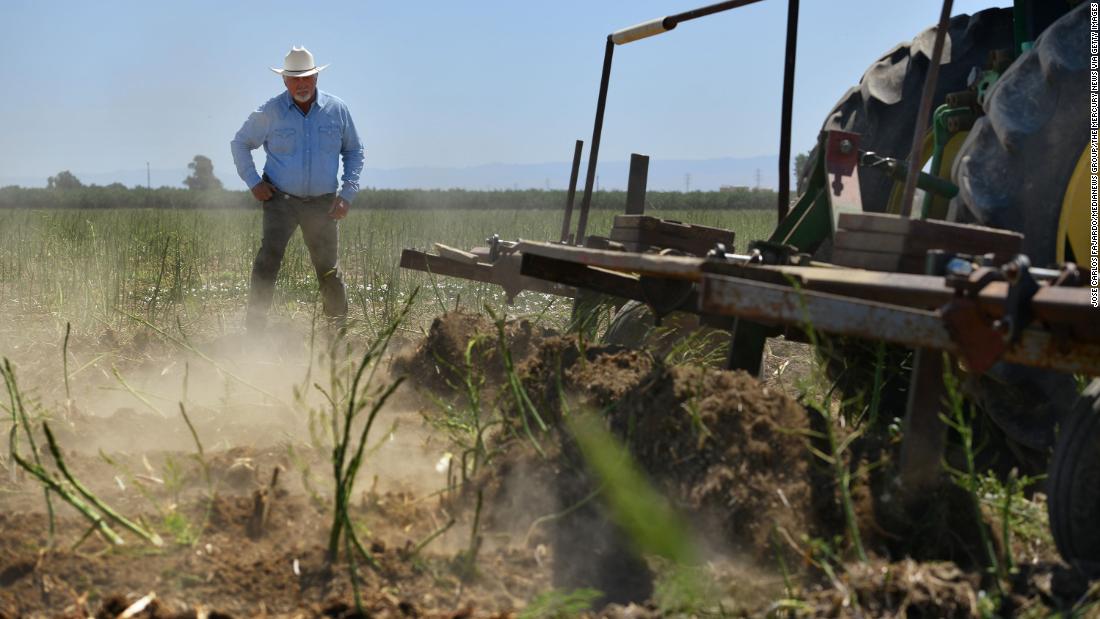 “I got the land, I got the people. I have everything but no water. I can’t do it,” said Del Bosque, a 73-year-old farmer in Firebaugh, California.

Del Bosque is one of the many Latino farmers and workers whose lives revolve around California’s agriculture industry and who have been forced to make difficult decisions due to the ongoing water crisis.

Years of low rainfall and snowpack in the state have now led to rapidly draining reservoirs. Last month, the state’s two largest reservoirs reached “critically low levels” just as extreme drought conditions expanded from covering 40% to 60% of the state, according to the US Drought Monitor.

Federal officials dealt a large blow to farmers in the state’s Central Valley when earlier this year, they significantly reduced allocations for irrigation. Many of these farmers rely on underground reservoirs for their operations and officials said only a limited number of agriculture customers would receive water deliveries. They are serviced by the Central Valley Project, a complex water system made of 19 dams and reservoirs as well as more than 500 miles of canals across the state.

While farmers have previously made numerous changes in response to the drought, this year’s water limits have pushed them to leave more portions of their land idle and reduce the number of workers they hire. Del Bosque says he stopped growing asparagus and sweet corn, solely focusing on melons and almonds, which most of the world’s crops are produced in California.

Without those crops, Del Bosque was not able to hire about 100 people to work on his farmland.

“These are people who had worked for us for many years, and they’re highly skilled people,” Del Bosque said.

Researchers at the University of California, Merced estimate the drought had a $1.1 billion impact in the state’s agriculture industry last year.

Their report, released in February, says roughly 385,000 acres were drought idled in the Central Valley. They also linked the loss of nearly 8,750 full- and part-time jobs across the state to the drought.

Hernan Hernandez, executive director of the California Farmworker Foundation, said many farmworkers are now struggling to find jobs that will keep them working all year long.

Because there is less farmland being harvested or grown, some farmers are opting to hire larger crews than usual. While they are doing it to keep more people employed, Hernandez says, the work is getting done faster and farmworkers end up hunting for their next job sooner than anticipated.

“Many people come to the Central Valley because they feel like this is an area where they can have steady work throughout the year. Whether they were documented or undocumented. Now, the drought continues to plague this area and work is more scarce, it’s more limited,” Hernandez said, referring to workers who come from Mexico and other parts of California.

Worried about being able to afford rent, childcare and higher gas prices, farmworkers are starting to look outside agriculture to supplement their income.

“In the daytime, some will be at a farming operation and in the nighttime, they’ll be at packing houses. Some are now entering restaurant and retail businesses. We’ve heard of some being Uber drivers after work. There’s less work and they got to find a way to make ends meet. They’re now doing various things just to pretty much continue to live in the state,” Hernandez said.

Del Bosque, whose parents and himself were farmworkers, says he worries about the future of his farm and the potential of a massive exodus of workers.

There are more than 112,000 producers in the United States who identify as Hispanic and 60% of them live in Texas, California and New Mexico, according to the USDA’s 2017 Census of Agriculture.
California employs the most agricultural workers in the US, the Bureau of Labor Statistics says. An estimated 77% of all farmworkers are Hispanic, according to the latest National Agricultural Worker Survey.

“They can’t sit here and wait ’till next year. They have to do something to support their family and because the whole valley is dry there’s probably other farmers in the area like me that don’t have the jobs. Some of them (farmworkers) may have to move to another state,” Del Bosque said.

Lawmakers in California are considering new legislation aimed at supporting farmworkers who lose work due to drought conditions.
Senate Bill 1066, proposed by State Sen. Melissa Hurtado, a Democrat, aims to create a state-funded project that would provide a monthly $1,000 cash payment for three years to households with at least one farmworker.
“SB 1066 will provide much needed help, and assistance to those struggling to feed their families, in an environment of increasingly rising food costs and uncertainty. Supporting our farmworkers is just the tip of the iceberg; we need to provide additional drought relief and ensure water is available for homes, and for health, and that it is truly available to all,” Hurtado previously said about the bill.