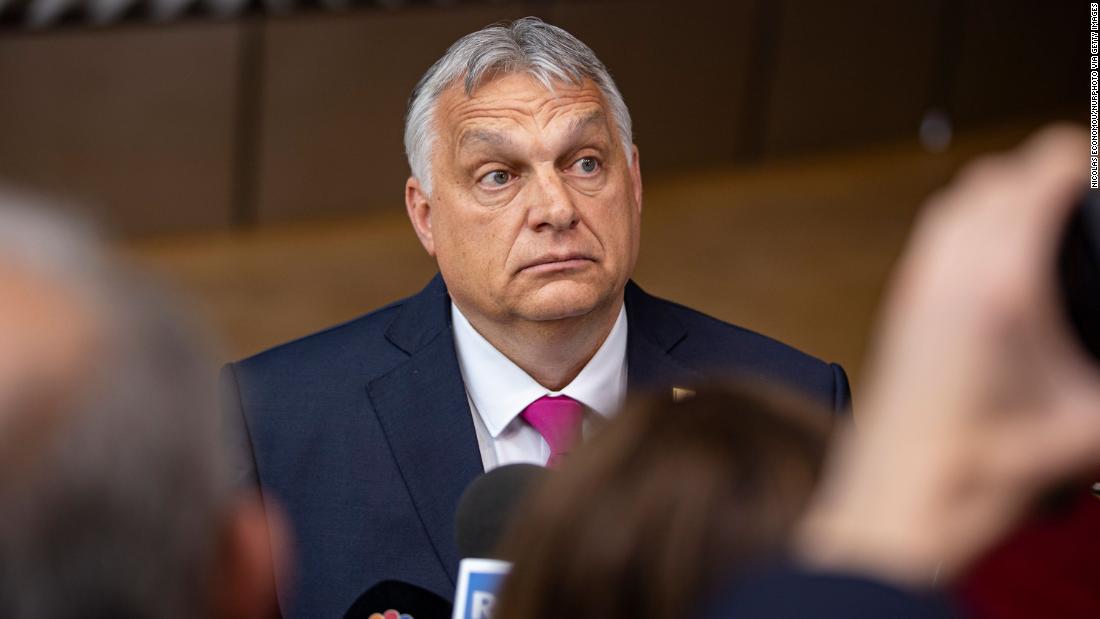 Each day European nations have been buying Russian oil, they have been pumping $850 million into the war chest of President Vladimir Putin. And yet somehow they couldn’t figure out how to stop. During the 26 days the European Union has been dithering over sanctions, Russia was able to bank more than $22 billion in oil revenues from European nations, many of whom wanted nothing more than to end this trade entirely.

One leader of one European nation was able to hold off any embargo for almost a month and a chunk of the embargo for the rest of the year, while rewarding his country with cheap Russian oil indefinitely. Viktor Orban, Hungary’s strongman and Putin’s most devoted partner in the EU, woke up Tuesday with a real reason to celebrate his 59th birthday.

Hungary, as well as Slovakia and the Czech Republic, all landlocked and tied to Russian oil fields via the southern spur of the Druzhba (Friendship) Pipeline, will be able to receive Russian crude oil all but indefinitely — as much as 750,000 barrels a day, paying some $2 billion a month at its currently discounted price of $93 a barrel (compared with the price of western Brent crude of just over $120).
Hungary won a pledge that oil through the pipeline would not be interrupted. Orban immediately gloated on his Facebook page: “Hungary is exempt from the oil embargo. Hungarian families can sleep peacefully tonight.”
But so can Putin in many respects. He has from now until the end of the year to find new markets for the oil that Europe won’t be buying as the embargo phases in slowly. And there have been some willing purchasers — especially at the bargain basement prices for Russian product. Already in the past week some 74 million to 79 million barrels of oil was on tankers headed for India and China, according to The Times of India.
In the end, to preserve at least a fig leaf of an EU, the 26 other member states did what some had been suggesting they do from the beginning — simply impose an embargo on Russia themselves and cut Hungary free.

The problem today is the precedent. It was painfully clear that Hungary, by digging in its heels, was able to do just what it wanted in the end. What’s to prevent others in the future from behaving similarly on other issues critical to the European community?

The agreement, in whatever fashion, was supposed to be a triumphal swansong for French President Emmanuel Macron, whose country has held the rotating leadership of Europe for the past six months. Macron’s determined advocacy for the full sanctions package comes in the face of fears that it will adversely affect even the strongest West European economies.

And on June 12, the French will elect a new parliament, where Macron, reelected just last month, needs a majority to implement his priorities. Moreover, at the end of June, Macron turns over Europe’s reins to the Czech Republic through December — when the war in Ukraine could well be won or lost.

With the Czech Republic in such a position of leadership and in need of reliable sources of oil, it will be interesting to see the reaction of its prime minister, Petr Fiala, who has a frosty relationship with Putin. “We’re ready to get rid of our dependence on Russia’s energy sources … but we’re not able to do it in a short term,” Fiala said in Brussels on Monday. Which is more than Orban — who sought and apparently received an open-ended exemption from the oil embargo — has ever been prepared to concede.

It’s not like the EU didn’t know what it wanted to do. It simply couldn’t figure out how to get it done. On May 4, European Commission President Ursula von der Leyen proposed a total ban on European imports of oil from Russia — one element of a comprehensive sixth round of sanctions.

“Let us be clear: it will not be easy,” von der Leyen said in an address to the European Parliament. “Some member states are strongly dependent on Russian oil. But we simply have to work on it. So today we will propose to ban all Russian oil from Europe. This will be a complete ban on all Russian oil, seaborne and pipeline, crude and refined.”

She did offer at least a carrot to the handful of countries that are deeply dependent on this oil — a “phase out in an orderly fashion, in a way that allows us and our partners to secure alternative supply routes,” but with a clear six-month deadline. The goal was “maximizing pressure on Russia while at the same time minimizing collateral damage to us.”

Meanwhile, Putin has hardly been reluctant to tighten the screws himself on some particularly recalcitrant European countries. Russia has cut all deliveries of natural gas to Poland, Bulgaria and Finland, with fears it could soon do the same to the Netherlands and Denmark for refusing to pay in rubles, a maneuver designed to support the plummeting Russian currency.
“Russia has to lose,” Latvia’s Prime Minister Krišjānis Karinš told Politico ahead of this week’s European Council summit, adding that Europe should not make the mistake of opting for “peace at any cost.” The Baltic countries and Poland, effectively the frontline states bordering Russia and its ally Belarus, have been most vocal in expressing their view that Europe needs to speak strongly and with a single voice in confronting Putin and depriving Russia of the means to continue to wage what is developing into a costly war of attrition.
The rest of what is now the sixth round of sanctions by the EU is also critical—removing Russia’s largest bank, Sberbank, from the SWIFT money transfer network. And it has expanded the list of Russians whose travel and financial accounts will be frozen including Russian Orthodox Patriarch Kirill, who Pope Francis warned recently in a phone call against “turning himself into Putin’s altar boy.”
Already, some European countries are looking even further ahead. Estonia has begun talking of a seventh round of sanctions that would include turning off all Russian gas shipments, though its prime minister Kaja Kallas conceded on Tuesday she did not think this was likely.

At some point, Europe will have to make the hard decision whether unanimity is of greater importance than the ability to curb the activities of international outlaws. Only then will the West truly be in a position to influence those behaving badly.