Energy experts sound alarm about US electric grid: 'Not designed to withstand the impacts of climate change' 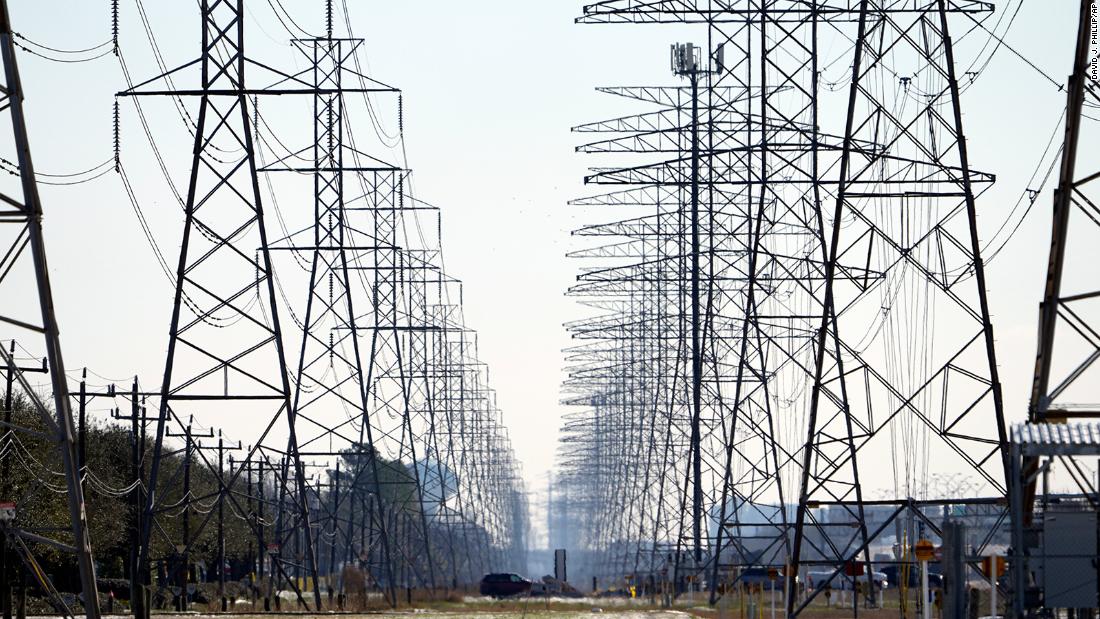 All of this suggests that more power outages are on the way, not only this summer but in the coming years as well.

Power operators in the Central US, in their summer readiness report, have already predicted “insufficient firm resources to cover summer peak forecasts.” That assessment accounted for historical weather and the latest NOAA outlook that projects for more extreme weather this summer.
But energy experts tell CNN that some power grid operators are not considering how the climate crisis is changing our weather — including more frequent extreme events — and that is a problem if the intent is to build a reliable power grid.

“The reality is the electricity system is old and a lot of the infrastructure was built before we started thinking about climate change,” said Romany Webb, a researcher at Columbia University’s Sabin Center for Climate Change Law. “It’s not designed to withstand the impacts of climate change.”

Webb says many power grid operators use historical weather to make investment decisions, rather than the more dire climate projections, simply because they want to avoid the possibility of financial loss for investing in what might happen versus what has already happened. She said it’s the wrong approach and it makes the grid vulnerable.

“We have seen a reluctance on the part of many utilities to factor climate change into their planning processes because they say the science around climate change is too uncertain,” Webb said. “The reality is we know climate change is happening, we know the impact it has in terms of more severe heatwaves, hurricanes, drought, and we know that all of those things affect the electricity system so ignoring those impacts just makes the problems worse.”

An early heatwave knocked six power plants offline in Texas earlier this month. Residents were asked to limit electricity use, keeping thermostats at 78 degrees or higher and avoid using large appliances at peak times. The Electric Reliability Council of Texas, or ERCOT, in its seasonal reliability report, said the state’s power grid is prepared for the summer and has “sufficient” power for “normal” summer conditions, based on average weather from 2006 to 2020.
But NOAA’s recently released summer outlook forecasts above average temperatures for every county in the nation.

“We are continuing to design and site facilities based on historical weather patterns that we know in the age of climate change are not a good proxy for future conditions,” Webb told CNN.

When asked if the agency is creating a blind spot for itself by not accounting for extreme weather predictions, an ERCOT spokesperson told CNN the report “uses a scenario approach to illustrate a range of resource adequacy outcomes based on extreme system conditions, including some extreme weather scenarios.”

The North American Electric Reliability Corporation, or NERC — a regulating authority that oversees the health of the nation’s electrical infrastructure — has a less optimistic projection.

In a recent seasonal reliability report, NERC placed Texas at “elevated risk” for blackouts this summer. It also reported that while much of the nation will have adequate electricity this summer, several markets are at risk of energy emergencies.

California grid operators in its summer reliability report also based its readiness analysis on “the most recent 20 years of historical weather data.” The report also notes the assessment “does not fully reflect more extreme climate induced load and supply uncertainties.”

Compounding the US power grid’s supply and demand problem is drought: NERC tells CNN there’s been a 2% loss of reliable hydropower from the nation’s power-producing dams. Add to that the rapid retirement of many coal power plants — all while nearly everything from toothbrushes to cars are now electrified. Energy experts say adding more renewables into the mix will have the dual impact of cutting climate change inducing greenhouse gas emissions but also increasing the nation’s power supply.

One Chicago neighborhood is already making plans for how to keep the lights, air conditioning and heat on when the larger grid fails.

In the Bronzeville neighborhood on Chicago’s South Side, solar panels dot the rooftop of a public housing complex. A short drive away, a a giant battery stores energy from the solar panels as well as natural gas generators, creating a micro grid. The state energy company, Commonwealth Eddison, is working with community members to make the neighborhood energy independent.

“Without power we are talking about potential life-threatening situations, so this micro grid provides that backup to be able to deliver power even when the [main] grid isn’t there,” said Paul Pabst, an engineer for Commonwealth Edison.

The project is pending approval but once it’s operating, the micro grid can connect and share power with the main grid. In the event of a blackout, it can disconnect and operate independently, tapping its stored battery energy to power the homes, police station and hospital in the area for four hours.

Yami Newell is a Bronzeville resident and energy advocate. She has seen the cascading effects of an unreliable power grid in Chicago, a place that’s no stranger to weather-related outages from both extreme cold and extreme heat. Losing power in a heatwave can create a dangerous health situation, and for families on a fixed income, losing all of the food in their refrigerator can be financially devastating.

As communities look for innovative ways to build a more resilient grid, Bronzeville is one possible blueprint. Until states build a more resilient power grid, climate change will force energy companies to continue to take emergency actions, like asking people to limit electricity use or forced rolling blackouts to manage the grid when supply can’t meet demand.