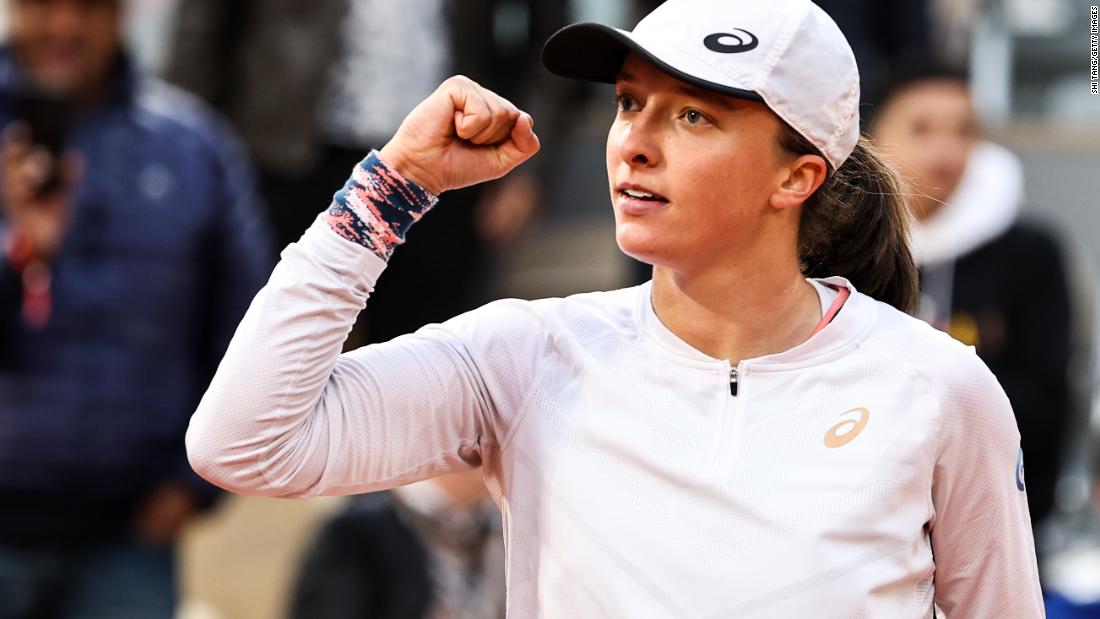 Swiatek, who turned 21 on Tuesday, won her first grand slam title two years ago at Roland Garros. Now, with a winning streak of 32 matches and the longest unbeaten run on the women’s tour since Williams bagged 34 victories in succession in 2013, she is the favorite to win this year’s French Open.

But the Polish star won’t let the pressure phase her.

“[T]here’s no point of thinking, ‘Oh, this streak is getting long. When am I going to lose?’ Or, I don’t know, is it even possible to win so many matches?” she told the WTA Insider Podcast.

“I just don’t think about it. I honestly kind of believe that the sky’s the limit and I can go even forward.

“That kind of attitude of just looking forward, not thinking what’s already happened really helped me because I’m also saving energy by not doing that. I’m pretty proud of myself,” she added.

Though it isn’t always plain sailing for Swiatek, whose winning streak was under threat at the French Open on Monday.

She defeated Chinese teenager Zheng Qinwen in the fourth round, but not before Zheng took a set off the world No. 1.

Zheng, 19, looked on track for a major upset when she claimed the opener in a tiebreak before Swiatek took control to win 6-7(5) 6-0 6-2 for her 32nd straight victory.

“It wasn’t easy to find solutions and to find other tactics and do something differently, because I wasn’t sure what I was doing wrong,” she said.

Swiatek started to regroup in an unorthodox way, choosing to sing Dua Lipa in her head instead of focusing on the “technical stuff.”

“That’s not the first time. I’m always singing something,” she revealed.

Sport runs through Swiatek’s family, with her father rowing for Poland at the 1988 Seoul Olympics.

“I think we’re always focused on work because of him, because he had high expectations that we were going to get good grades and we were going to have good practices,” she previously told CNN.

“Sometimes these expectations are not a good thing because they are pressure for a child, but in my case, I think it really helped me because I learned how to be professional.

“My sister got injured when she was 15 and she stopped playing tennis, but she has a great brain and she is studying really well so I think we’re both going to be successful.”

Swiatek’s dominance comes at a time when there is no clear challenger to her winning streak.

Ashleigh Barty, who was dominant on every surface having won Wimbledon, the French Open, and the Australian Open, suddenly retired from tennis earlier this year at 25.

Victory in the French capital would also make Swiatek the first woman to win six consecutive tournaments since Justine Henin did so between 2007 and 2008.

“I think the key is going to be just doing the same stuff I did before. Right now, at these tournaments, I already faced a lot of pressure. So hopefully the different kind of pressure that we have at a grand slam isn’t going to overwhelm me,” she told the WTA Insider podcast.

“But I’m trying to accept that the streak someday is going to finish. It’s physically and mentally hard to keep doing the same job every week because we are also humans.

“So I’m just going to try to find a little bit more distance to it and just treat the grand slam as any other tournament and maybe enjoying what’s around a little bit more — enjoying that we have one day off between matches because here it was pretty intense and I didn’t even get to see Rome. So in Paris, I hope it’s going to be different.”