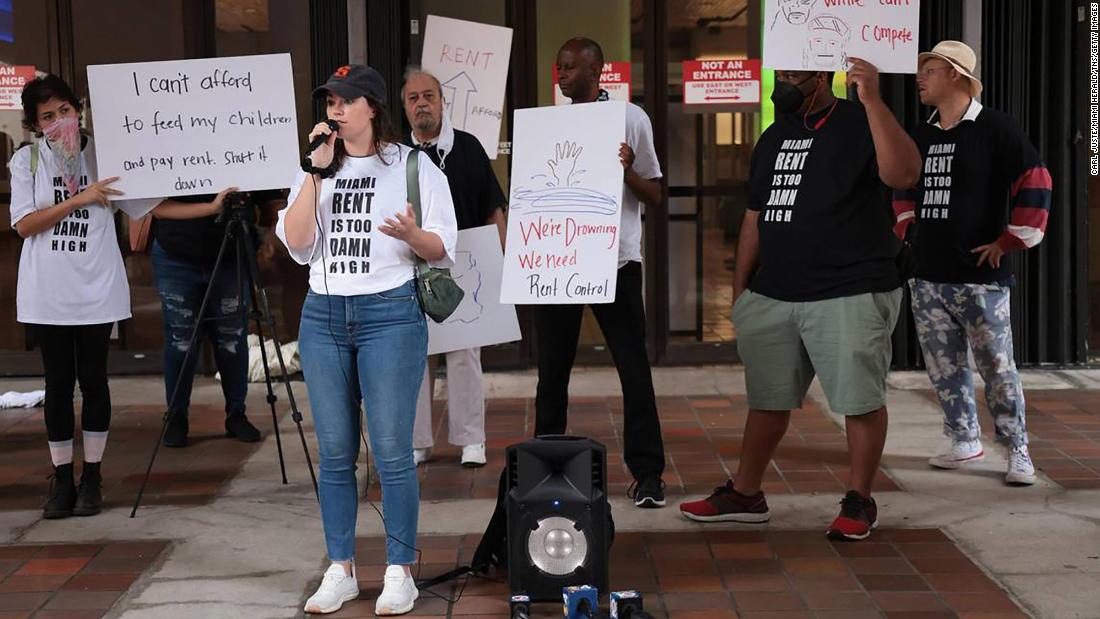 “Ron DeSantis has made Florida (into) California and New York under his policies,” Fried told Fox earlier this month. “And affordability is the number one ssue that I hear on the ground.”

DeSantis, widely considered a future GOP presidential contender, has countered that Florida is a victim of its success under his leadership because people are looking to “get the hell out of these dumpster fire states,” resulting in greater demand for housing from recent arrivals. When Fox host Laura Ingraham recently asked the governor about a news report that declared Florida the country’s least affordable state, DeSantis said he couldn’t help that so many people want to live here.

“The demand to live in Florida is more intense than it’s ever been in the history of our state,” he told Ingraham. “And that’s just the reality.”

For most of Florida’s modern history, planners have confronted concerns the state was attracting more people than there were places to live. Yet every year, people have kept coming.

Then in 1992, Florida enacted a small tax on real estate transactions and earmarked it for the State Housing Trust Fund. It generated hundreds of millions of dollars for affordable housing in its first decade, according to a 2021 state Senate staff analysis.

But as the dot-com bubble burst and hit Florida in the early 2000s, elected leaders started taking from the trust fund to fill other budget holes. It became a trend that spanned Republican administrations. During the two decades ending in 2021, the state collected $5 billion for the housing fund but legislators diverted $2.3 billion for other needs.

Jaimie Ross, president of the Florida Housing Coalition, told CNN that when trust fund dollars are eliminated, the effect is multiplied, because those dollars would have been used by local governments to leverage private sector investment to build new housing.

“The money wasn’t being used for affordable housing,” Ross said. “It’s impossible to know what it was used for.”

When DeSantis took office in 2019, Florida had the highest rate of cost-burdened households in the country, meaning they spent more than 30% of their income on housing expenses, according to a report by the online marketplace Apartment List.

“There’s been a gap between wages for the types of jobs we produce here in Florida — lower-wage service jobs — and housing costs for years,” said Anne Ray, the manager of the Florida Housing Data Clearinghouse at the University of Florida’s Shimberg Center for Housing Studies. “It has gotten more extreme.”

Between July 1, 2020, and July 1, 2021, Florida experienced the highest net domestic migration in the country, with over 220,000 people moving to the state. The rush of new residents has exacerbated the housing crunch, helping push home prices to levels not seen since before the Great Recession and leading rents to surge by 20% to 50% in many parts of the state.
At the same time, Florida was slower than most states to hand out some $870 million in federal emergency rental assistance.

“These large rent increases are what’s going to push people into doubling up (bringing multiple families under one roof) or homelessness,” Ray said.

The Miami metropolitan area, where the median rent for a one-bedroom unit is now about $2,600 a month, saw the highest year-over-year overall rent increases in the country, according to a recent report by the real estate website Realtor.com surveying the 50 largest metro areas in the US. The Orlando and Tampa markets ranked second and third on the list, and Jacksonville also cracked the top 10.
“You cannot separate that far from fundamental values without economic repercussions,” said Ken Johnson, a real estate economist at Florida Atlantic University, whose model suggests rental properties in Florida are some of the most overvalued in America. “There are too few units, too many people coming in.”
In his first three years as governor, DeSantis signed budgets that swept $447 million from the housing trust fund for other purposes. The latest state budget, now awaiting the governor’s signature, includes $337.7 million for housing from the trust fund and no money swept for unrelated expenses.

Democrats say more needs to be done. In December, dozens of state Democratic lawmakers signed on to a letter asking DeSantis to declare a state of emergency and give the attorney general the authority to go after landlords for price gouging if they increase rents by more than 10%. To date, DeSantis hasn’t taken those steps.

Florida lawmakers returned to Tallahassee last week in an attempt to fix the state’s broken property insurance market. Democrats urged DeSantis to add affordable housing to the special session agenda, but the request was ignored.
DeSantis in news conferences has said he assisted cash-strapped Floridians by providing tax relief, including a one-year moratorium on taxing diapers and a gas tax holiday scheduled for October, and bonus checks for police, firefighters and teachers. He recently announced a new $100 million loan program for first-time homebuyers in “critical professions,” including teachers, firefighters and health care professionals. Affordable housing funds will pay for the program. Critics say that takes money away from building affordable units in communities and note that the program isn’t available to the tens of thousands of low-income service workers in the state.

Bryan Griffin, spokesman for the governor, pointed out that more money was swept from the housing trust funds during past administrations, including the four years Crist was in office, than in the budgets passed during DeSantis’ first term.

“Those who are quick to insist on a ‘state of emergency’ to address affordable housing are those who believe that the government can and should solve every problem with the heaviest hand,” Griffin said. “Increasing government intervention into markets cannot solve complex problems like this — in fact, it tends to make those problems worse.”

DeSantis has pinned Florida’s housing problems on the Biden administration, insisting that home prices and rents, like the rest of the economy, have been hit by inflation. He doesn’t expect the problem to quickly reverse because the cost of construction materials and workers is going to make it more expensive to build new homes and rental units in the near future.

“If you’re going to build an apartment complex that may be multifamily, the cost of that is now up 30%,” DeSantis said earlier this year. “And so that’s going to cost more on the back end for people.”

Though political debates often focus on the state housing trust fund, Ross believes Florida would have an affordable housing problem even if lawmakers hadn’t reneged on their commitment. It certainly aggravated the issue, she said, but she also supports officials removing land from the speculative market for affordable housing and enacting laws that require those units remain accessible to lower-income earners, not sold to investors who jack up the prices.

“Land and housing are priced at whatever the market will bear. Individuals and corporate investors with cash to spend are driving up the prices,” she said. “Florida is a beautiful state — surrounded by water and nice weather. Attracting investors and pricing out the Florida workforce is a large part of the problem.”

A reason to vote in November?

There are signs across the state that some Floridians are reaching a breaking point.

Miami-area activists held a “The Rent is Too Damn High” rally in March in which locals shared stories of soaring apartment bills. The same month, the City of Tampa had to temporarily pause submissions to a rent and move-in assistance program after receiving around 1,000 applications in a week. Earlier this month, Jacksonville protesters dumped dressers and mattresses on the steps of City Hall to demonstrate against the city’s high eviction rate.
Local leaders are starting to respond to the political unrest. Orange County officials are weighing an emergency one-year rent control ordinance around Orlando. In Miami-Dade County, where residents have reported rent hikes of roughly $400, leaders approved a tenant’s bill of rights that went into effect this month. Landlords there are now required to provide 60-days notice when they increase rent by more than 5%.

Dwight Bullard, a political adviser at Florida Rising, an advocacy group, said he believes the housing crisis has reached a new class of people, and he expects it to motivate how they vote in November.

“People come up to me who are traditionally apolitical and say, ‘What are we going to do about affordable housing?'” Bullard said. “These are folks who have means, who were not complaining about this before, but when confronted with a $600 increase in rent, they’re saying, ‘Whoa, whoa, whoa, who is controlling the levers? Who do I need to talk to about why this is happening?”

Democratic candidates appear to be responding. US Rep. Val Demings, who is running for US Senate, has made affordable housing a pillar of her campaign against Republican Sen. Marco Rubio. She toured a Habitat for Humanity construction site as part of what she called an “affordability tour” earlier this year. Last month, in the Panhandle, Demings met with people still living in homes damaged in 2018 by Hurricane Michael because they can’t find affordable alternatives.

Fried and Crist, the leading Democratic candidates for governor, have each released a policy framework to address what Democrats and many housing advocates are calling a crisis. Both have vowed to stop future raids on the housing trust fund. Fried has also said she would call for a state of emergency and extend property tax exemptions for homeowners. Crist has promised a down payment assistance program for veteran, young-family and first-generation homebuyers, and a new housing czar.

The Republican Party of Florida did not respond to messages and phone calls asking for comment. Republican strategist Tom Piccolo said he doubts any issue can distract from voters’ concerns over inflation, and that will help the GOP.

“They’re reminded of that every day at the pump and at the grocery store,” Piccolo said.

Orange County Commissioner Emily Bonilla, a Democrat, said she doesn’t think voters will respond unless Democratic candidates offer more bold proposals. Bonilla has pushed her county to consider what would be the state’s first rent control measures. State law prohibits local governments from interfering in rental markets, except during an “existing housing emergency which is so grave as to constitute a serious menace to the general public.” Though it hasn’t been implemented before, Bonilla believes the current situation qualifies.

“You hear from people who you would think would be against this, making statements that their kids can’t afford to leave their homes,” Bonilla said. “It’s a unique situation. It’s people of all income levels being affected by this. And it doesn’t matter if you’re a minority, if you’re White, young, old or what political party you’re in, they’re all being affected.”

But Bonilla doesn’t expect other Democrats to get behind her push for rent control. Fried in a statement said the Republican-led legislature is unlikely to repeal the state ban on rent control and she would instead direct the attorney general to investigate price gouging. Crist spokesperson Samantha Ramirez said his proposed housing czar would work with local governments to find solutions, adding, “Localities need the flexibility to explore options to keep rents affordable.”

While Democrats differ in their solutions, they are united in their intent to keep the issue on the front burner through the election.