A $2-Million Tabernacle Was Stolen From a Brooklyn Cathedral 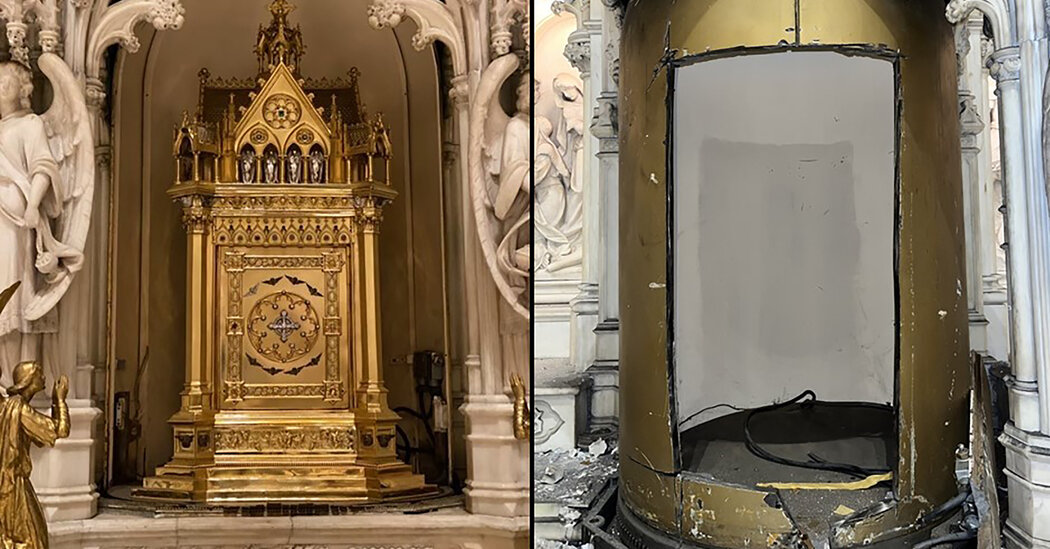 When Father Frank Tumino entered the sanctuary at St. Augustine Roman Catholic Church in Brooklyn on Saturday for the start of what was supposed to be a beautiful holiday weekend, the cathedral’s sacred space was missing something special — worth $2 million.

Someone, Father Tumino discovered, had apparently entered the church with a power saw, cut open the altar that housed the Holy Eucharist — the items used for the communion ritual — stolen the altar’s solid gold tabernacle and decapitated a statue of an angel. Holy items taken from the tabernacle had been strewn across the altar.

“To know that a burglar entered the most sacred space of our beautiful church and took great pains to cut into a security system is a heinous act of disrespect,” Father Tumino said in a statement issued on Sunday by the Roman Catholic Diocese of Brooklyn.

The church, a large brownstone building nestled in the heart of the Park Slope neighborhood and known as the area’s “Notre Dame,” began as an anchor for Brooklyn’s German and Irish Catholic communities in 1888. The stolen tabernacle, which is solid 18-karat gold, covered in jewels and valued at around $2 million, was made the same year, according to the police.

Investigators believe the burglary happened between 5:30 p.m. Thursday and 4 p.m. Saturday, the police said. The church was closed and under construction at the time and the sanctuary’s security cameras were not operating, the police said.

The Brooklyn Diocese said in its statement that church officials believed the break-in happened sometime Friday. A safe in the church was also cut open, but it was empty, the diocese said in the statement.

In the statement, the diocese called the burglary “a brazen crime of disrespect and hate.” The police said the crime was not being investigated as bias-related at the moment. A suspect had not yet been identified, and law enforcement officials were still determining whether the crime was committed by an individual or a group, the police said.