Maloney vs. Nadler? New York Must Pick a Side (East or West) 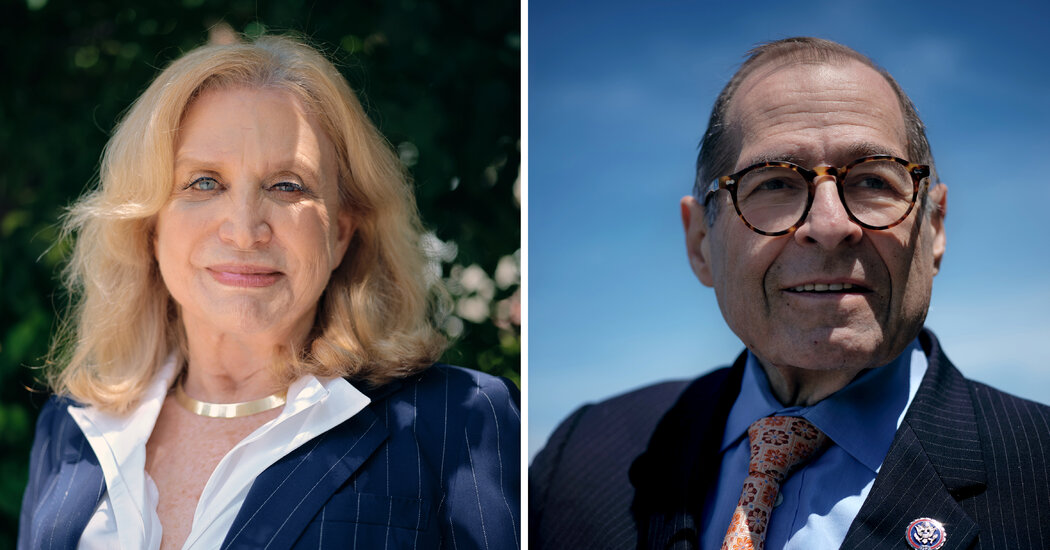 As he sat in the shade of Riverside Park on a sparkling recent weekday morning in Manhattan, Representative Jerrold Nadler tried to make sense of how two powerful allies suddenly found themselves at war.

A court-ordered redrawing of New York’s congressional district lines had combined the East and West Sides of Manhattan into a single district for the first time since World War II, putting Mr. Nadler and Representative Carolyn Maloney, a longtime colleague, on a potentially disastrous collision course in the Aug. 23 Democratic primary.

Attempts to broker a peace settlement were made, but Mr. Nadler, over a chilled Diet Coke, acknowledged that they were somewhat halfhearted.

He recalled telling Ms. Maloney in a private conversation on the House floor in Washington a few days earlier that he would win, suggesting she run for a neighboring seat.

“She said basically the opposite, and so it was an impasse,” Mr. Nadler said, “and we left it at that.”

On an island known for Democratic infighting, Mr. Nadler, 74, and Ms. Maloney, 76, have managed to coexist more or less peacefully for three decades.

They built parallel political machines and accumulated important committee chairmanships. Along the way, they had become powerful stalwarts — if not political mascots — in their districts: Ms. Maloney, a pathbreaking feminist and the widow of an investment banker, represents an East Side district so wealthy it was once christened the silk-stocking district; Mr. Nadler, a proudly opinionated old-school progressive, holds down the West Side.

But their long truce came to a shattering end last week, when a state court imposed a significant revision on New York’s congressional map. The new lines have roiled Democrats across the state, but perhaps nowhere has the change been more disruptive than Manhattan.

“I’d say it’s sad,” Ms. Maloney said in an interview near her Upper East Side home. “It’s sad for the city.”

The primary matchup between Mr. Nadler and Ms. Maloney may be one of the most bruising political spectacles in living memory, a crosstown clash between two respected party elders in the twilight of their careers. And it will play out in one of the most politically influential pockets of the United States — home to financiers, media titans and entertainers, and the source of millions of dollars in campaign donations each election cycle.

Not since Bella Abzug challenged fellow West Side representative William Fitts Ryan in a 1972 race pitting two liberal icons against each other has New York City faced a primary contest with the potential to be quite so fraught.

“No one ever forgot that,” Harold Holzer, a historian and former aide to Ms. Abzug, said of the primary contest. “Maybe this will be more heartbreaking than it is infuriating. But for those who lived through the first one and remained pained by it for years, it’s history repeating itself.”

And yet neither Mr. Nadler nor Ms. Maloney has wasted any time working the phones to pressure union leaders, old political allies and wealthy donors — many of whom the two have shared for years — to pick sides.

What to Know About Redistricting

Allies of Ms. Maloney whispered doubts about Mr. Nadler’s health. (His aides say his health is good.) Mr. Nadler’s associates circulated old news articles about Ms. Maloney’s obsession with pandas, and suggested that Speaker Nancy Pelosi, who is officially neutral in the race, really preferred him.

For all their superficial differences, Mr. Nadler and Ms. Maloney have had broadly similar career arcs.

Both came up through local New York City politics in the 1970s. Mr. Nadler was a precocious young lawyer who started a group of self-styled reformers, the West Side Kids, and won a State Assembly seat in 1976. Ms. Maloney, a former teacher, was a top legislative aide in Albany before winning a City Council seat in 1982. She was the first Council member to give birth while in office and the first to introduce legislation giving rights to same-sex couples.

They arrived in Congress within two months of each other in the early 1990s. Mr. Nadler inherited his safely Democratic West Side seat when the incumbent died of a heart attack on the eve of the primary. Ms. Maloney had to work harder for hers, upsetting a long-serving liberal Republican, Bill Green, to win the East Side seat once held by Mayors John V. Lindsay and Edward I. Koch.

Mr. Nadler and Ms. Maloney are among the House’s most progressive members and both lead prestigious committees. Ms. Maloney is the chair of the Oversight and Reform Committee, which most recently oversaw an overhaul of the Postal Service. Mr. Nadler leads the Judiciary Committee, a role that earned him national attention during President Donald J. Trump’s two impeachments.

Neither lawmaker grew up in Manhattan. Ms. Maloney is from Greensboro, N.C. Mr. Nadler, the son of a one-time chicken farmer, was mostly raised in Brooklyn. Both have strongly rebuffed pleas to retire.

Ms. Maloney enters the contest with an apparent, if slight, demographic edge: She already represents about 60 percent of the voters in the new district. The spread narrows among Democratic primary voters, according to data complied by the Center for Urban Research at the CUNY Graduate Center.

Political analysts are warning that the outcome may depend on who casts ballots in a primary in late August, when many residents of the Upper East and West Sides decamp to the Hamptons or the Hudson Valley.

A third Democrat, Suraj Patel, is also running. His premise is that it is time to give a younger generation a chance to lead. He came within four percentage points of beating Ms. Maloney in the primary two years ago. (Mr. Nadler, by contrast, has not had a close election in nearly 50 years.)

“If you are satisfied with the state of New York, the country or the Democratic Party, they are your candidates,” Mr. Patel, 38 said.

For now, predictions about which candidate will win appear to correlate with proximity to the Hudson and East Rivers.

“The West Side votes heavily, that’s to our advantage,” said Gale Brewer, a former Manhattan borough president who now represents the area on the City Council. She added of Mr. Nadler, whom she is backing: “He’s got a brain that is frightening.”

Rebecca A. Seawright, an assemblywoman from the Upper East Side supporting Ms. Maloney, said that the congresswoman has “endless energy” and an innate understanding of women’s priorities that her allies believe will resonate with voters in a year when the Supreme Court may strike down Roe v. Wade.

What is redistricting? It’s the redrawing of the boundaries of congressional and state legislative districts. It happens every 10 years, after the census, to reflect changes in population.

How does it work? The census dictates how many seats in Congress each state will get. Mapmakers then work to ensure that a state’s districts all have roughly the same number of residents, to ensure equal representation in the House.

Who draws the new maps? Each state has its own process. Eleven states leave the mapmaking to an outside panel. But most — 39 states — have state lawmakers draw the new maps for Congress.

If state legislators can draw their own districts, won’t they be biased? Yes. Partisan mapmakers often move district lines — subtly or egregiously — to cluster voters in a way that advances a political goal. This is called gerrymandering.

Is gerrymandering legal? Yes and no. In 2019, the Supreme Court ruled that the federal courts have no role to play in blocking partisan gerrymanders. However, the court left intact parts of the Voting Rights Act that prohibit racial or ethnic gerrymandering.

“All a person has to do is tell Carolyn Maloney, no, she can’t do it, and she will prove them wrong,” Ms. Seawright said.

Ms. Maloney’s single-mindedness was on clear display one afternoon this week, as she sipped a latte outside Blank Street Coffee on Madison Avenue, near her longtime home, making small talk with constituents passing by while fielding questions from a reporter.

“Rooting for you,” said one smartly dressed middle-age man, who identified himself as Hal. He stopped to engage Ms. Maloney in a conversation about the impending abortion decision.

In an interview, she cited her success in securing money to build a Second Avenue subway line, the fight for a national women’s history museum in Washington and her recent appearance on a Russian sanctions list.

“The difference is not whether you are male or female, it’s your effectiveness,” she said. “In every job I’ve held, I’ve been the first woman ever to hold it.”

Mr. Nadler plans to pitch himself to voters as a more principled progressive. He trumpets his role in Mr. Trump’s impeachments and frequently points out that he and Ms. Maloney were on opposite sides on the Iraq War (she voted for, he voted against), the Patriot Act (she was for, he was against) and the Iran nuclear deal (he voted for, she against).

But any reason will do. “Voters are clearly going to vote for me because I lost weight,” quipped Mr. Nadler after a man came over to compliment his slimmer profile.

Both candidates played down differences between their sides of Manhattan, pointing to common interests and shared cultural institutions. But they clearly have work to do to convince voters.

Asked if she had a favorite West Side retreat, Ms. Maloney mentioned street corner booksellers (“It’s sort of European”), “the cultural institutions” and “the passion for social action.” But reaching for the name of a restaurant beloved by generations of New Yorkers, she fumbled.

“There’s a deli over there; it’s called Grassroots,” Ms. Maloney said tentatively, only to be quickly interrupted by an aide reminding her that she meant Barney Greengrass. “You’ve gone a million times,” the aide said.

Reached by telephone, Gary Greengrass, whose grandfather founded the Amsterdam Avenue mainstay in 1908, said that he could not remember seeing Ms. Maloney there but that Mr. Nadler was a frequent diner. Still, Mr. Greengrass said he planned to “stay like Switzerland” in the contest.

Mr. Nadler named the Metropolitan Museum as his favorite East Side institution: “Ever since I saw ‘The Ten Commandments’ as a kid, I’ve been interested in Egypt.”

Any humor, though, appears to be lost on many New Yorkers, who see the choice between the two as an inevitable lose-lose, forced on them without much explanation by a state court five hours away.

No matter the outcome, the contest will cost New York City a high-ranking Democrat with the kind of sway to bring money home, and distract from the more pressing fights the Democrats are trying to wage with Republicans.

“People like me should be actively trying to help Democrats all over the country, that’s what I really am focused on,” said Ken Sunshine, a veteran public relations executive, who is planning to raise money for Mr. Nadler. “Instead I’m going to be hosting events and plotting and scheming to defeat a friend of mine. It’s insane.”

In conversations across Manhattan, the prospect elicited a series of sighs from Democratic voters like Joy Schulman, an Upper West Side resident who said she had long-lasting admiration for both candidates.

“What a shame that it would end up this way,” she said.