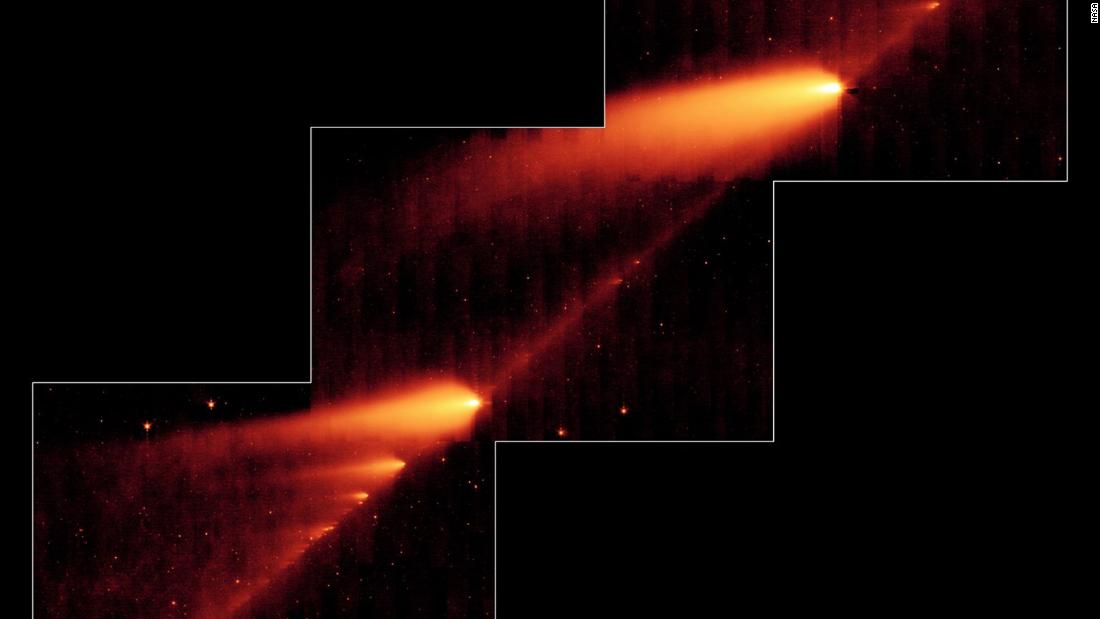 Night sky watchers in North America have the best chance of seeing the tau Herculid shower, with NASA recommending around 1 a.m. on the East Coast or 10 p.m. on the West Coast as the best times to look up. The moon is new, so there will be no moonlight to obscure the meteors.

However, there’s no guarantee of a dazzling display even if the sky is clear and dark, NASA stressed. It could come to nothing.

The comet, officially known as 73P/Schwassmann-Wachmann, or SW3, was discovered in 1930 by German observers Arnold Schwassmann and Arno Arthur Wachman. It wasn’t spotted again until the late 1970s and in the 1990s the comet shattered into several pieces, NASA said.

By the time SW3 passed Earth again in 2006, it was in nearly 70 pieces, and has continued to fragment further since then, the statement said.

NASA said observations from the Spitzer Space Telescope published in 2009 indicated that some fragments are moving fast enough to be visible, exciting space scientists.

Each year, there are around 30 meteor showers, which occur when the Earth passes through the trail of debris left by a comet or asteroid, that are visible with the naked eye.

Some meteor showers have been around for centuries. For example, the Perseid meteor shower, which occurs each year in August, was first observed about 2,000 years ago and recorded by Chinese astronomers, NASA said. New meteor showers like this one, should it materialize, are relatively rare.

‘All or nothing event’

The debris from SW3 will strike Earth’s atmosphere slower than other meteor showers and it’s the velocity at which the debris strikes rather than the size of the debris that causes the shower.

Even if visible, this means the meteors would be much fainter, for example, than the eta Aquariids meteors earlier this month.
“This is going to be an all or nothing event. If the debris from SW3 was traveling more than 220 miles per hour when it separated from the comet, we might see a nice meteor shower. If the debris had slower ejection speeds, then nothing will make it to Earth and there will be no meteors from this comet,” Bill Cooke, who leads NASA’s Meteoroid Environment Office at NASA’s Marshall Space Flight Center in Huntsville, Alabama, said in a statement.

Meteor showers are typically named after the constellation from where they appear to radiate in the night sky although Robert Lunsford, secretary general of the International Meteor Organization, said that the tau Herculids had been incorrectly named. He said they will appear to radiate from a constellation known as Bootes, northwest of the brilliant orange star known as Arcturus (alpha Bootis).

“You need not look directly overhead as meteors may appear in any portion of the sky. They are actually more likely to appear at lower elevations in the sky since at these elevations one is looking through a far thicker slice of the atmosphere that when looking straight upwards.”

If the tau Herculid shower turns out to be a dud, fear not, there are several other opportunities to witness meteor showers this year.

The Delta Aquariids are best seen from the southern tropics and will peak between July 28 and 29, when the moon is 74% full.

Interestingly, another meteor shower peaks on the same night — the Alpha Capricornids. Although this is a much weaker shower, it has been known to produce some bright fireballs during its peak. It will be visible for everyone, regardless of which side of the equator they are on.

The Perseid meteor shower, the most popular of the year, will peak between August 11 and 12 in the Northern Hemisphere, when the moon is only 13% full.

Ashley Strickland contributed to this report.