7 takeaways from the 2022 primary season so far 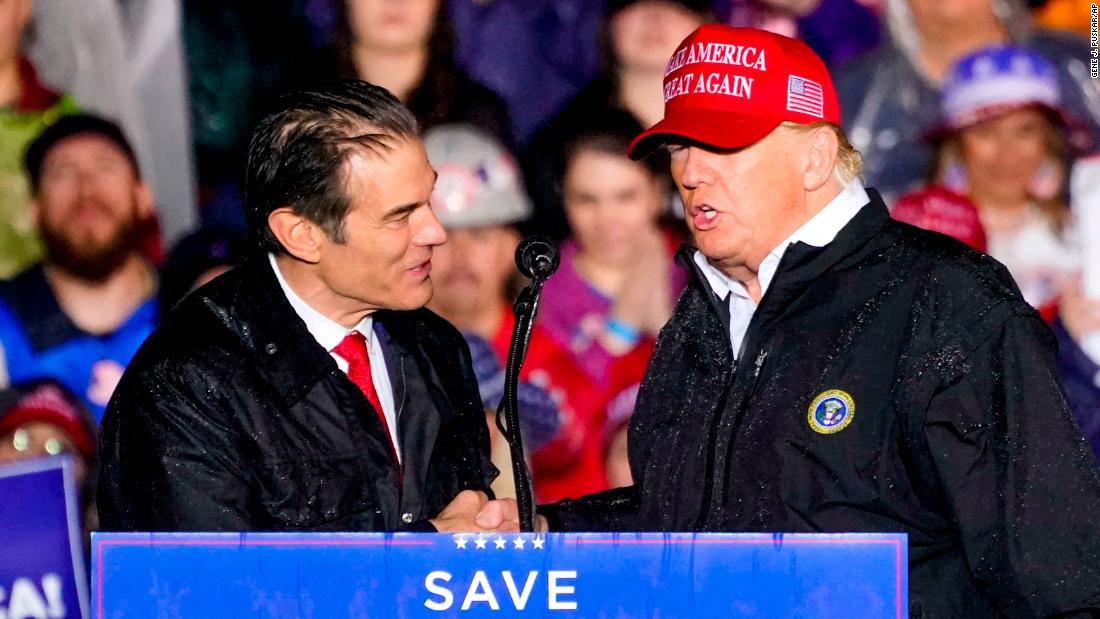 Democrats, whether they’re already on Capitol Hill or want to be, will face voters demanding a path forward. Republicans won’t face that pressure from their primary voters, but movement toward even modest legislative action in Washington could become a divisive issue in GOP contests.

Here are seven takeaways from the first three months of the 2022 primaries:

In Georgia, Trump was hit with his most forceful repudiation yet. Republican primary voters roundly rejected his attempts at payback against state officials who rejected his lies about 2020 election fraud. They delivered Gov. Brian Kemp a 52-point victory over Trump-backed former US Sen. David Perdue and handed two other Trump targets, Secretary of State Brad Raffensperger and Attorney General Chris Carr, easy victories against Trump-endorsed challengers.
Adding to the former President’s embarrassment, Kemp closed the primary race by rallying on the eve of the election with former Vice President Mike Pence, who is considering his own 2024 presidential bid.

The results in Georgia showed that, while Republican voters remain largely supportive of Trump, there are limits to their willingness to entertain his personal grievances. Kemp, Raffensperger and Carr all had conservative records of their own, and — aside from rebuking Trump’s lies about election fraud — had done little to agitate GOP voters in Georgia.

Elsewhere, Trump’s support wasn’t enough to carry candidates who were mired in scandal. North Carolina Rep. Madison Cawthorn was ousted in a primary despite Trump urging voters to give him a “second chance.” And in Nebraska, it was Gov. Pete Ricketts’ endorsement that won the day in the gubernatorial primary, as Trump-endorsed Charles Herbster, who was accused of sexual misconduct by multiple women, lost to Ricketts-backed Jim Pillen.

… But Trump can still steer some Republican races

Trump did, however, demonstrate his lasting influence in a series of open-seat primaries.

His ability to steer GOP voters was on display in Ohio, where he endorsed J.D. Vance — the venture capitalist and author who had been polling around third place — in the primary to replace retiring Republican Sen. Rob Portman. In the race’s closing days, Vance rocketed to the front of the pack and won the primary; he is now the heavy favorite in the November general election matchup against Democratic Rep. Tim Ryan.
In West Virginia, Trump similarly boosted US Rep. Alex Mooney in the year’s first member-versus-member race against US Rep. David McKinley after the two were forced into the same district following the state’s loss of a House seat in post-2020 census reapportionment.
Even when Trump’s chosen candidates don’t win, Republican primaries largely orbit around him — debates over whether candidates have been sufficiently supportive of the former President and clashes over whether and how to react to his lies about election fraud. Even candidates who don’t have Trump’s support, such as Alabama Rep. Mo Brooks — who won and then lost the former President’s endorsement after Brooks said it was time to look beyond the 2020 election — won’t criticize Trump. Brooks made it into a GOP Senate runoff after claiming that Trump had been manipulated by Senate Minority Leader Mitch McConnell while insisting he was “the only proven ‘America First’ candidate in this Senate race.”

Democratic leaders stick with their most conservative member

After watching Democratic margins erode with Latino voters in South Texas in the 2020 election, party leaders see Cuellar’s culturally conservative brand of politics — he opposes abortion and has long supported gun rights — as more likely to help them hold the seat in November.

That bet might have paid off for now. Cuellar holds a 177-vote lead after the May 24 runoff, with the race yet to be called by CNN.

But even if Cuellar is a safer bet to win in November, there could be a steep cost. After the leaked draft Supreme Court opinion that would overturn Roe v. Wade and the elementary school shooting in Texas, the issues of abortion and guns are set to dominate the national debate in the coming weeks and months. Top Democrats’ support for a congressman who is at odds with a majority of the party on those issues could alienate voters and call into question leaders’ sincerity and commitment to the issues.

Then there’s the January FBI search of Cuellar’s home and campaign office. Cuellar’s attorney insisted he is not a target of the federal investigation. But the matter could become a political liability that would attach not just to Cuellar, but to House Democratic leadership too.

The first round of Democratic congressional primaries have highlighted a wide and overlapping series of divisions within the party. The ideological fight between moderates and progressives typically grabs the most headlines, but the elections so far have also exposed local discontent with Democratic leaders on Capitol Hill — a dynamic that has been exacerbated by redistricting.

The Democratic primary in Oregon’s 5th Congressional District, which pitted Rep. Kurt Schrader against challenger Jamie McLeod-Skinner, provided the case in point. Schrader was endorsed by President Joe Biden and backed by the Democratic Congressional Campaign Committee. But the party’s involvement rankled county chapters, which had endorsed McLeod-Skinner and wrote a letter to the DCCC asking it to stay out of the race. One key reason: Though Schrader is, technically, the incumbent, the district had been redrawn so drastically that more than half its voters had never seen his name on the ballot.

Also baked into nearly all the notable early primaries was a remarkable surge of outside spending, headlined by a pair of pro-Israel groups that backed moderate candidates.

The early verdict on the influence of that money, which also poured in through new super PACs funded by cryptocurrency and tech billionaires, respectively, is a mixed one. In the big races targeted by outside spenders, progressives scored a couple of big wins and few disappointing losses.

But the fight is only now in its opening stages. The late-August Democratic primaries in New York, its maps scrambled by a court-appointed “special master” after a state court deeming the legislature’s attempt a gerrymander, are on track to be extremely competitive, especially in safe-blue seats — putting national party leaders, big-spending dark money groups and state’s robust left-wing movement on a collision course.

Top Senate Democratic candidates skated through primaries in May.

In Ohio, Ryan easily claimed his primary win. In North Carolina, former state Supreme Court Chief Justice Cheri Beasley cleared the field ahead of the primary, setting her up for a quick victory on May 17. And in Pennsylvania, in what had previously been seen as one of the party’s most competitive primaries, Lt. Gov. John Fetterman made quick work of US Rep. Conor Lamb, winning every county in the commonwealth.

The success of these top candidates underscored two divergent trends for the party this year.

First, Democrats are able to get their preferred Senate candidates into strong primary positions, allowing the party and activists to get behind candidates early. While there are exceptions to this, including the Wisconsin Democratic Senate primary in August, this will likely continue in the coming months too — with Florida Rep. Val Demings’ fundraising juggernaut of a Senate campaign another example of Democrats getting behind a candidate early.

But this also signals more ominous news for the party: In a year when their Senate primaries have been largely decided weeks before voters went to the polls, the November elections loom as trying tests for the party in what could be a markedly difficult year. And with a Senate that is evenly divided 50/50, each race will have national pressure — and consequences.

Electability is changing inside the Democratic Party

What constitutes an electable Democrat is shifting across the country.

Fetterman, a 6-foot-8-inch, bald, tattooed former mayor known for wearing shorts and hoodies, romped over Lamb, a polished Marine veteran who has beaten Republicans in tough races and looked all the part of a traditional politician.
Beasley, a woman who would become North Carolina’s first Black senator if elected, so clearly led the primary field, she forced Jeff Jackson, an affable state senator and Army National Guardsman, to end his campaign months before the primary and run for the US House instead.

The same has also been seen in races for the House, where wins by racially diverse and first-time candidates have redefined what it means to be a good recruit within the party. In years past, a strong candidate would have looked a lot more like the people Fetterman and Beasley defeated or pushed out.

This could continue throughout the year, with candidates like Lt. Gov. Mandela Barnes, the first Black man to be elected statewide in Wisconsin, and Demings, Orlando’s first Black female police chief, running in Senate primaries.

In the wake of the leaked draft Supreme Court opinion that would overturn Roe v. Wade, much of the attention was on what Congress — the building across the street from the highest court in the land — could do to address abortions rights.

But here’s the reality: It’s governor’s mansions and statehouses across the country — especially those states hosting gubernatorial elections in November — that will be at the forefront of the fight.
In May, Pennsylvania Attorney General Josh Shapiro became the Democratic nominee for governor in the commonwealth. And he did it with a clear focus on abortion rights. “Given the dynamics in the commonwealth of Pennsylvania, the next governor is going to have a bill on their desk that will restrict or outlaw abortion rights and they will have a decision to sign it or veto it,” he told reporters. “I will, of course, veto it.”

Shapiro is a clear example of how the abortion fight lies with the states. Pennsylvania is one of a handful of states where Republicans control both houses of the state legislature, meaning whoever controls the governor’s mansion will be central to the state’s abortion laws.

The same is true for several Democratic gubernatorial campaigns this year, including races in Wisconsin and Michigan, where the respective Democratic governors, Tony Evers and Gretchen Whitmer, are vying for second terms this fall.