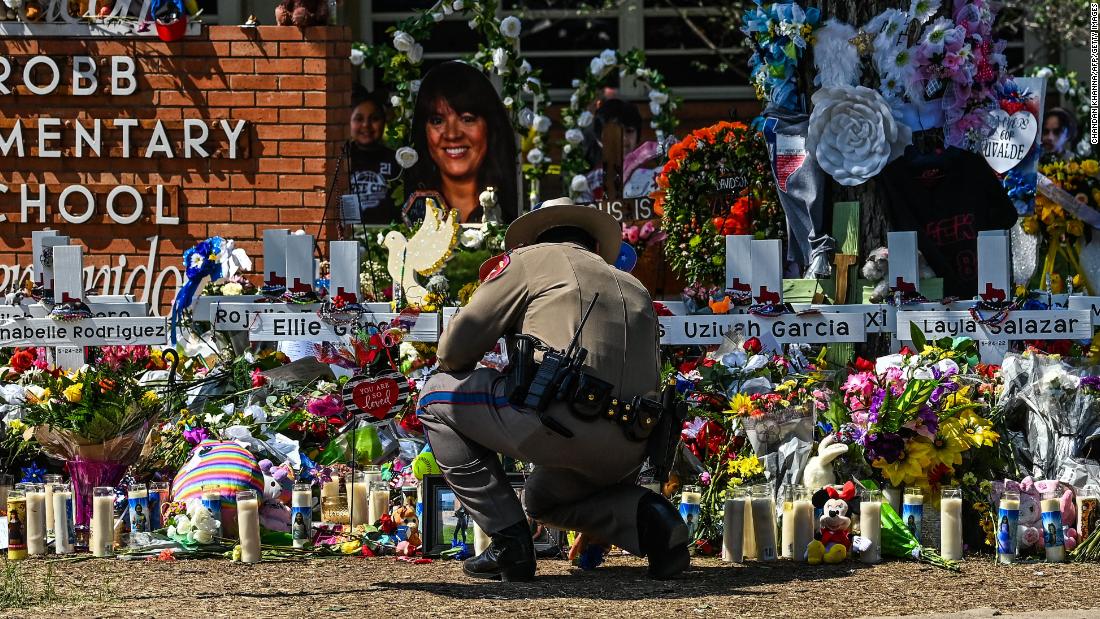 9-year-old Daniel, alongside his mother, Briana Ruiz, told CNN the gunman fired several shots into his classroom at Robb Elementary after being unable to enter. The door had been locked by his teacher, and the bullets fired struck the teacher as well as a classmate.

Daniel began “hiding under a table next to the wall,” and said he could see the gunman through the door’s window.

“I could still see his face,” he said. “I could see him staring at people in front of me.”

Daniel later climbed out of a broken window to escape, cutting his hand on some glass, he said, and the two people injured in his class would survive. However, his cousin, Ellie Garcia, was in a different classroom and was one of 19 children and two teachers killed in the shooting.
The Texas Department of Public Safety has laid out a timeline of the Tuesday shooting, showing the gunman was in a classroom with students for more than an hour before he was shot and killed by a Border Patrol tactical response team. Yet questions remain over whether the response from law enforcement agencies was timely enough to prevent further casualties.
At the request of Uvalde’s mayor, the US Department of Justice announced it will conduct an inquiry into the circumstances surrounding the shooting.

“The goal of the review is to provide an independent account of law enforcement actions and responses that day, and to identify lessons learned and best practices to help first responders prepare for and respond to active shooter events,” the DOJ said in a statement Sunday.

Alfred Garcia, whose daughter was killed in the shooting, told CNN he was in “disbelief” over how much time elapsed during the shooting before it ended and shared his frustration with authorities’ response.

“It doesn’t take a genius to figure out that it just took too long to get in there and, you know, had they gotten there sooner, and someone would have taken immediate action, we might have more of those children here today, including my daughter,” he said.

President Joe Biden and first lady Jill Biden visited Uvalde Sunday to pay their respects, attending Mass and laying flowers at a memorial for the victims. The two also met privately with family members of the victims as well as first responders.

Funeral services for the victims are set to begin Monday and funeral homes in Uvalde have committed to covering costs for families.

The actions undertaken by first responders — or lack thereof — during the shooting has been a focal point of those who say more should have been done sooner.

Law enforcement officers in Texas are trained to intervene quickly, according to active shooter guidelines in the state’s commission on law enforcement 2020 training manual obtained by CNN, which states an “officer’s first priority is to move in and confront the attacker.”

“As first responders we must recognize that innocent life must be defended,” it says. “A first responder unwilling to place the lives of the innocent above their own safety should consider another career field.”

Seven officers arrived on scene within two minutes of the shooter firing in the classroom. Three officers approached the locked classroom where the gunman was and two officers suffered graze wounds from bullets fired from behind the door, DPS said. Officers then stationed down the hallway.

Border Patrol agents belonging to a specialized unit arrived to the scene around 12:15 p.m. — roughly 45 minutes after the gunman began shooting. The officer in charge had already made the determination that the subject was barricaded in the room, according to a source familiar with the situation.

The team then did not breach the classroom for at least another 30 minutes, according to the timeline provided by DPS. Because the Border Patrol often serves in a support role, they will defer to the agency on command, according to the source.

A 911 call placed at 12:16 p.m., according to DPS, from a girl in one of the classrooms where students were shot told the operator that eight or nine students were still alive.

When asked Friday why officers didn’t move in sooner, Texas Department of Public Safety Director Steven McCraw said “it was believed at the time that the subject was stationary and barricaded,” adding they believed “there was no risk to other children.”

“On retrospect, from where I’m sitting right now — clearly there was kids in the room, clearly they’re at risk,” McCraw said. “There may be kids that are injured, that may have been shot but injured and it’s important for life saving purposes to immediately get there and render aid.”

In the wake of the shooting, an outpouring of support to those in the community is being provided.

Carlos Hernandez, whose restaurant is a mile from Robb Elementary, wrote on Facebook hours after the shooting, “There’s no possible way I can open my kitchen with a broken heart and have fun doing it.”

On Thursday — his 33rd birthday — Hernandez decided to cook for the community, whipping up favorite dishes, including wings, mac-and-cheese and fried fish tacos.

Within two hours, Hernandez had given away more than 60 family-sized platters to feed mourning families and neighbors who are still learning how to cope with the tragedy inflicted on their tight-knit community.

“It’s a real tough situation, I’m just trying to show the kids that they do have us as their backbone and a support system,” Hernandez told CNN. “We always provide, whether there is an incident or no incident.”

Elsewhere in Uvalde, the El Progreso Memorial Library has become a place of healing.

On Wednesday, just a day after the shooting, children’s librarian Martha Carreon sat in front of rows of little faces, reading, singing, and giggling with the children, taking them away to a safe place far from the school where many of them became witness to horror.

“We want our building to be a safe space, a refuge that is a quiet, calm and cool haven,” El Progreso Memorial Library director Mendell Morgan told CNN.

Along with psychologists who will be available every weekday for children and adults to talk to, there will also be massage therapy practitioners, volunteers for arts and craft activities, pianists to play soothing music, and even magicians to hold professional magic shows.

“This is a strong community where we have true care and concern for one another,” Morgan said. “Many, if not most here, hold fast to their faith believing in God, that good is stronger than evil and light is stronger than dark.”