'These are our children:' 80 minutes of horror at school 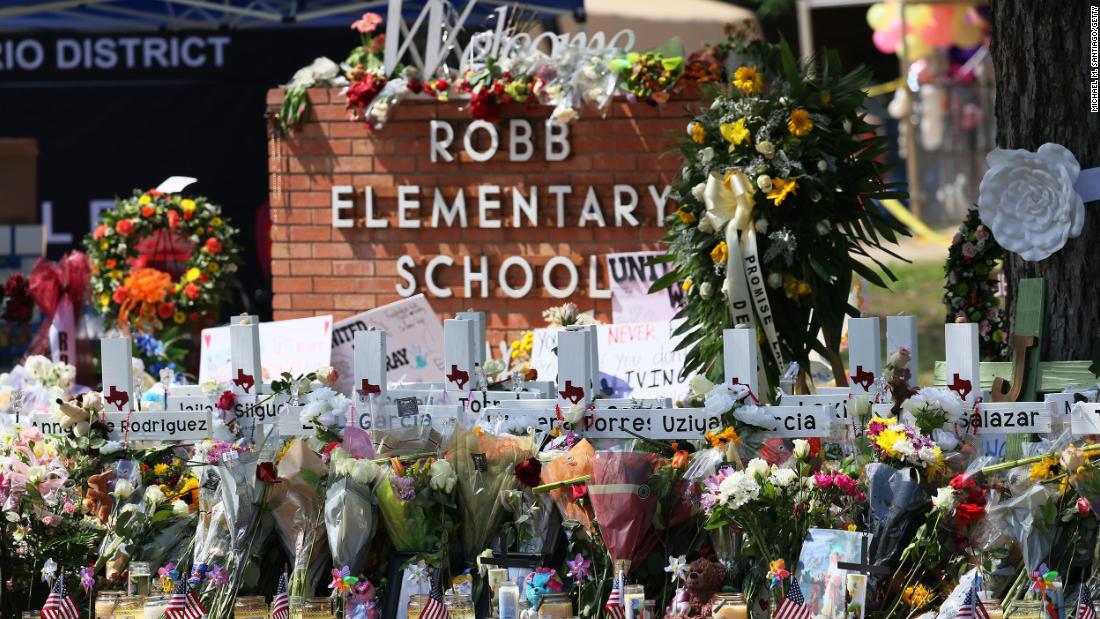 Within hours, the little aspiring lawyers, police officers, dancers and biologists of Robb Elementary would cross paths with the high school dropout who gifted himself two AR-15 style rifles and hundreds of rounds of ammunition he legally purchased for his 18th birthday one week earlier.

At 11:33 a.m. Ramos entered the school, unimpeded, through a rear door that a teacher had left propped open. He fired more than 100 rounds in the school and two adjoining classrooms. A Border Patrol tactical team fatally shot him more than an hour after the terror began.

Grieving parents planned funerals as they seethed over the delayed response. Law enforcement officials for days offered conflicting explanations. A public safety department colonel admitted Friday that waiting in a school hallway while trapped students made 911 calls was the “wrong decision” by the commanding officer at the scene. It’s not clear how many lives the mistake may have cost.

“It was something I never want to see again,” said Judge Eulalio “Lalo” Diaz, who, as Uvalde County justice of the peace, had the task of identifying the slain children and teachers in a county with no medical examiner. “These are our children.”

‘Just wait for it’

Ramos, who had no criminal record, had few friends and largely kept to himself. In the weeks leading up to the massacre, he exhibited a dark side in livestreams on the social media app Yubo. Several users who witnessed the recent videos said he told girls he would rape them, showed off a rifle he bought, and threatened to shoot up schools. They didn’t take him seriously until now.

At about 11 a.m. on Tuesday he called a 15-year-old girl in Germany. He had befriended her earlier this month on the social media app.

The young man and the teen from Frankfurt spoke daily on FaceTime. They also communicated on Yubo and played and chatted on the Plato gaming app. He was curious about life in Germany. He confessed to spending a lot of time alone at home.

“He looked happy and comfortable talking to me,” said the girl, whose mother gave permission for her to be interviewed.

Still, some chats alarmed her. He admitted hurling dead cats at houses. And he never mentioned plans to meet friends.

In videos and text messages, Ramos spoke of visiting his new friend in Europe. One message included a flight itinerary.

On Monday, Ramos told the girl he had received a package of bullets that expanded upon entering tissue.

“Just wait for it,” he said, ominously.

The next day, in the call just after 11 on the morning of the shootings, he told the girl he loved her.

Screen shots of messages Ramos sent soon after the call show he complained that his grandmother had contacted AT&T about “my phone.”

His final text to his new online friend was at 11:21 a.m. local time — then early evening in Germany: “Ima go shoot up” an elementary school.

With days left in the school year, the second- through fourth-graders of Robb Elementary collected their awards Tuesday morning.

The children smiled and posed for pictures. Students watched Disney’s “Lilo & Stitch” in the waning days of a long semester.

Less than a mile away, Ramos — after shooting his 66-year-old grandmother in the face and texting his German friend one last time — drove a pickup to the school campus and crashed the truck in a ditch. It was 11:28 a.m. local time.

He opened fire on two people outside a funeral home across the street but did not hit them. His grandmother managed to call 911. She was airlifted to a hospital in San Antonio and is expected to survive.

Derek Gonzalez was near the school when he heard the gunfire.

“Shooting! Shooting!” he recalled a woman shouting outside as bullets struck the ground.

Within minutes, Ramos made his way from the road to the school parking lot and began firing at classroom windows. Moments before he pulled open the building’s unlocked rear door, a school safety officer in a patrol car drove right by the gunman, who had hunkered down behind a car.

At 11:33 a.m. Ramos moved down a hallway and into one of two adjoining classrooms — 111 and 112. At no time since crashing the truck did police confront him.

Minutes later, seven officers arrived at the school. Three officers approached the locked classroom where the gunman had now barricaded himself. Two officers were shot from behind a door and suffered graze wounds.

A barrage of more than 100 rounds echoed through the halls of Robb Elementary in the slaughter’s first minutes. It was at least the 30th school shooting at a K-12 school this year.

He said ‘goodnight,’ then shot teacher

Miah Cerrillo, 11, was watching the Disney movie with classmates. Alerted to a shooter in the building, teachers Eva Mireles and Irma Garcia moved to protect their young charges. When one teacher tried to lock the classroom door, the gunman shot out a door window.

The teacher backpedaled and the gunman followed her. He said “Goodnight,” then shot her. He turned and opened fire on the other teacher and Miah’s classmates.

The girl cried at times and wrapped herself in a blanket as she recalled the horror. She heard screams and more shots when the gunman entered a connected classroom. Between rounds, the shooter played music Miah described as “sad — like you want people to die.”

Miah feared he would come back for her and a few surviving friends. She covered her hands with the blood of a classmate slain next to her and smeared herself with it. She played dead.

At one point Miah and a classmate managed to use the phone of their dead teacher to call 911.

“Please come,” she told the dispatcher. “We’re in trouble.”

Around the time students started making 911 calls as many as 19 law enforcement officers had already taken cover in the hallway, at 12:03 p.m. They took no action and waited for classroom keys and tactical equipment.

At 12:16 p.m. a girl who made several 911 calls told a dispatcher that eight or nine children were alive in her classroom.

“The on-scene commander at that time believed that it had transitioned from an active shooter to a barricaded subject,” Texas Department of Public Safety (DPS) Col. Steven McCraw said on Friday, describing the call not to confront the shooter as “the wrong decision, period.”

“There’s no excuse for that,” he added.

The official who made the decision not to breach the classroom was the school district police chief, Pedro “Pete” Arredondo, who has not spoken publicly since two very brief press statements on the day of the shootings. He has three decades of law enforcement experience. There was no response to attempts to reach Arredondo at his home on Friday.

Before the end of the noontime hour on Tuesday, at least 10 911 calls were made from classrooms, including several from the same girl pleading for help. She whispered at one point that multiple bodies surrounded her in Room 112.

Amerie Jo Garza turned 10 years old weeks before the attack. She got her first cell phone as a gift. Classmates would later tell her stepfather, med aide Angel Garza, that she was killed while trying to call 911.

“She was just trying to call authorities,” said Angel Garza, sobbing as he cradled a photo of Amerie holding an honor roll certificate.

“I just want people to know she died trying to save her classmates.”

The chaos extended to outside the school

During the siege, some responding officers helped evacuate students and teachers in other parts of the school.

Frustrated parents gathered outside during the rampage. They urged officers holding them back to storm the school to stop the bloodshed.

One parent, Victor Luna, pleaded with officers to give him their gear. His son Jayden survived the shooting but he didn’t know that at the time.

Luna and other parents watched nervously as officers escorted students from the school. Video from the scene showed officers physically restraining some parents.

Throughout the night distraught families gathered at the SSGT Willie de Leon Civic Center, where buses delivered survivors. DNA samples were collected from parents to confirm whether their children were among the victims.

As the death toll grew, relatives who spent hours watching as others were reunited with their sons and daughters walked away sobbing from the makeshift reunification center.

The AR-15 rounds struck the heart of a small town.

Xavier and Lexi, the honor roll students, were among the victims. As were teachers Mireles and Garcia, who had taught together for five years. Two days after Garcia’s death, her husband, Joe, suffered a fatal heart attack. Their relatives said he died of a broken heart.

Other young victims were José Flores Jr., 10, and Eliana “Ellie” Garcia, who was 9. Nevaeh Alyssa Bravo was 10. Jacklyn Jaylen Cazares, 10, was killed along with her 10-year-old cousin and classmate Annabell Guadalupe Rodriguez.

Nearly 20 people were injured in the attack with a rifle that has been used in some of the most notorious and deadly mass killings in recent history.

The AR-15 style rifle was engineered to maximize its kill rate by raking enemy soldiers with high-velocity rounds. The original designers explained that the speed of the impact causes the bullet to tumble after it penetrates tissue. The result: Catastrophic injuries.

“We were treating destructive wounds and what that means is that there were large areas of tissue missing from the body,” said Dr. Lillian Liao, pediatric trauma medical director at University Hospital in San Antonio, which treated three children from Uvalde. “They required emergency surgery because there was significant blood loss.”

It was hard knowing many victims were likely already dead by the time police killed the shooter.

A grieving dad has but one question

In all, 80 minutes elapsed between the time officers were first called at 11:30 a.m. to the moment a federal tactical team entered locked classrooms and killed the gunman at 12:50 p.m.

To Miah, the 11-year-old survivor, it felt like three hours. She was there on the classroom floor covered in the blood of a classmate.

“Please send the police now,” she implored. It’s unclear if that was Miah on the line.

After waiting about 35 minutes outside the classroom, a US Border Patrol tactical team used a key to open a door. They had been at the school since 12:15 p.m. The teenage gunman kicked open the door of a classroom closet and opened fire, said a source familiar with the situation.

One agent held a shield. At least two others behind him engaged the shooter.

“It’s going to haunt them forever,” the source said, referring to the agents who responded and what they saw at the scene.

The siege was over.

Texas Gov. Greg Abbott had earlier in the week praised the “amazing courage” of the responding officers. On Friday he was in Uvalde for a news conference announcing state aid for the families affected by the shooting.

Abbott, who had canceled his appearance that day at the National Rifle Association convention 280 miles away in Houston, said he was “absolutely livid” that he was initially “misled” about the police response.

In the chaos outside the school on Tuesday, Angel Garza, the med aide, came upon a little girl who was covered in blood. She was crying. Her best friend had been killed.

Angel Garza asked her the name of the dead girl. It was his stepdaughter, Amerie Jo. That’s how he learned Amerie was gone.

Amerie’s biological father, Alfred Garza, was also outside the school as the massacre unfolded.

Days later, as gun enthusiasts and politicians gathered at the NRA convention and the governor questioned the actions of law enforcement, the grieving father had one question.

“Who’s going to pay for this?” Alfred Garza said.