Wildfires are contaminating the West's depleting water with ashy sludge 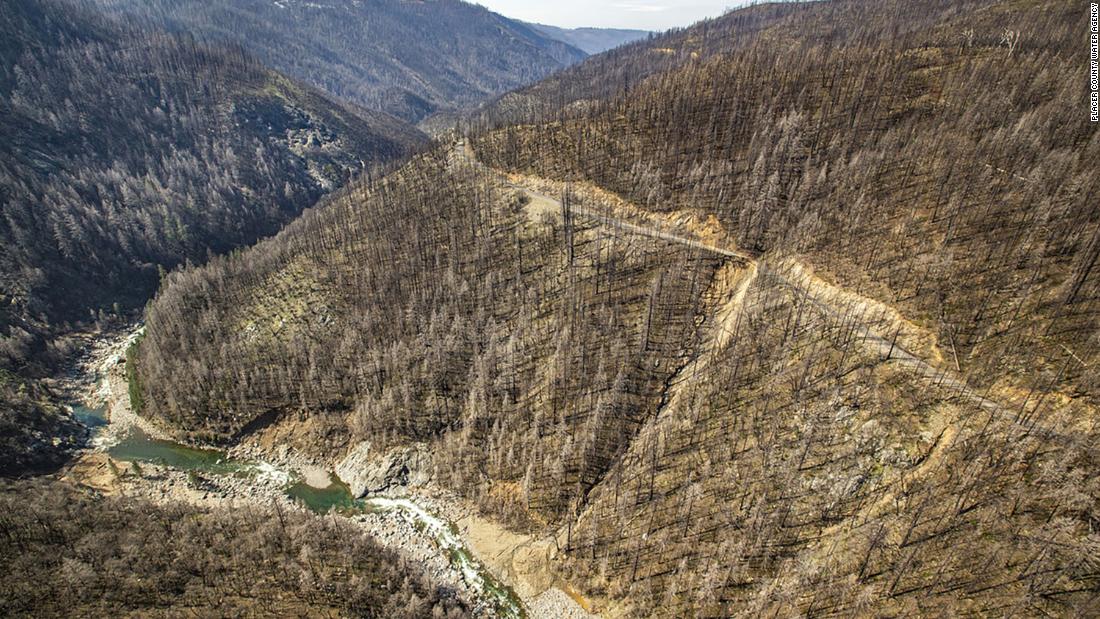 The fire-scarred land along the banks of the Gallinas River is on the forefront of Mayor Louie Trujillo’s mind these days. As much as the parched West needs rain, Trujillo and other officials are racing the weather to divert precious river water into a downstream lake before downpour comes and washes the burnt topsoil and ash into the river.

“There are large portions of the watershed you can see that are completely burned. It looks like burnt toothpicks sticking out of the ground for acres and acres,” Trujillo told CNN. “With the soil instability, during a heavy rain event it would be like putting water on a bunch of baby powder where it doesn’t absorb at all; it just falls. We hope to beat the monsoon season, doing some of the interventions we’re going to have to do along the watershed.”

Megafires aren’t just burning down homes, trees and wildlife in the West. They’re also destabilizing the soil. When it rains, thousands of tons of charred sediment flow into rivers and reservoirs used for drinking water. The Gallinas River, for example, supplies about 90 percent of the water for Las Vegas.

Even if they can filter out the taste of dirt and ash, water treatment managers also worry about the lingering impacts of charred organic compounds mixing with the chlorine used to purify the water so it’s drinkable. The Environmental Protection Agency has warned about the health impacts of mixing the two.

All of this is adding more stress to water resources that are already depleting in the West’s megadrought. Conservationists and officials are sounding the alarm about yet another impact of a warming climate, massive wildfires and fragile water resources.

“This is not our first megadrought, so we have to make really good use of every drop of water that we store,” said Dan Porter, forest program director for the Nature Conservancy. “These megafires are making that very difficult to do.”

The taste of sludge

In September 2014, California’s King Fire ripped through over 100,000 acres in El Dorado County. That fire was relatively small by the standards of other megafires, but it burned very hot.

It was “a blast furnace of an event that obliterated everything in its path,” Fecko told CNN. “It was nuclear winter up there after that event.”

The fire was just the first problem. The following rainy season, more than 300,000 tons of ashy, topsoil sludge ended up in the Rubicon River — normally pristine water that flows out of the Sierra Nevada mountains.

The huge sediment dump caused headaches for Fecko’s water agency on two fronts, he said. First was the impact to their hydroelectric power operations, which clogged up with dirt that made it tough to run the water through to generate electricity. The second was drinking water.

“You simply cannot filter out the taste and odor,” Fecko said, likening the taste and smell to the earthy smell after it rains. And he said the added sediment doubled the cost of water treatment at his facility, necessitating water filters to be changed out more often.

It can take years for that taste and smell to go away. That period only gets longer in the middle of a megadrought.

“It’s essentially these micro-organics you can’t filter out, it’s so small,” Fecko said.

And while humans have water filtration, wildlife does not. Researchers at the University of California, Davis captured photos of frog eggs after the sediment dump; they were covered by fine, ashy dirt, which blocks the eggs from getting oxygen.

“They rely on clean, well-oxygenated water,” Porter said. “When the wildfire chocks the stream full of mud, the oxygen-holding capacity of the water is reduced. It clogs gills; it clogs egg sacs.”

With an 8-year restoration project conducted by Fecko’s water agency, the US Forest Service, the Nature Conservancy and other partners still ongoing, conservationists are hopeful the frog population has recovered. But even with close to a decade restoring the landscape, sediment still shows up in hydropower bays, Fecko said.

Those micro-organic compounds that give water a funny taste and smell after fire-caused erosion are worrying for another reason.

When organic compounds from the ash interact with the chlorine used to treat water, it can form byproducts that can act as carcinogens — things that can cause cancer — with long-term exposure. It’s another aspect of this problem that scientists and water quality managers are studying.

“It’s tasteless, you can’t see it, but what the EPA has identified is long-term exposure to these disinfection byproducts, chronic exposure can actually be a carcinogen,” said Dan Corcoran, director of operations at the El Dorado Irrigation District in Placerville, California. “It’s a nationwide issue and it’s an evolving science.”

Corcoran’s water district had to deal with this problem after last year’s massive Caldor Fire torched the landscape in August. In October, the area was hit with an atmospheric river rain event that caused massive flooding and erosion.

“We went from drought to flood management literally overnight,” Corcoran said, describing a “wall of water” blackened by ash and filled with dead trees and debris flowing through the watershed.

Restoration projects in fire-scarred areas are ongoing and include prescribed burns and thinning to ensure the next fire isn’t so catastrophic and doesn’t pose as much of a challenge to rivers and reservoirs.

But there’s also an education campaign for policymakers and residents about the threat wildfires pose to their drinking water.

“Seventy-one percent of the entire state of California drinks water that comes out of the Sierra Nevada,” Corcoran said. “Three-quarters of the people who live in our state should be concerned with how our headwaters are managed.”

And with climate change exacerbating drought conditions in California and causing snow-melt water to run down weeks ahead of schedule, water officials and conservationists are warning of even more unpredictability ahead.

“I don’t think people really understand the severity of the threat to the overall system of water management across California and across the West,” said Porter. “We’re facing a climate-driven set of processes that we don’t have full control over.”