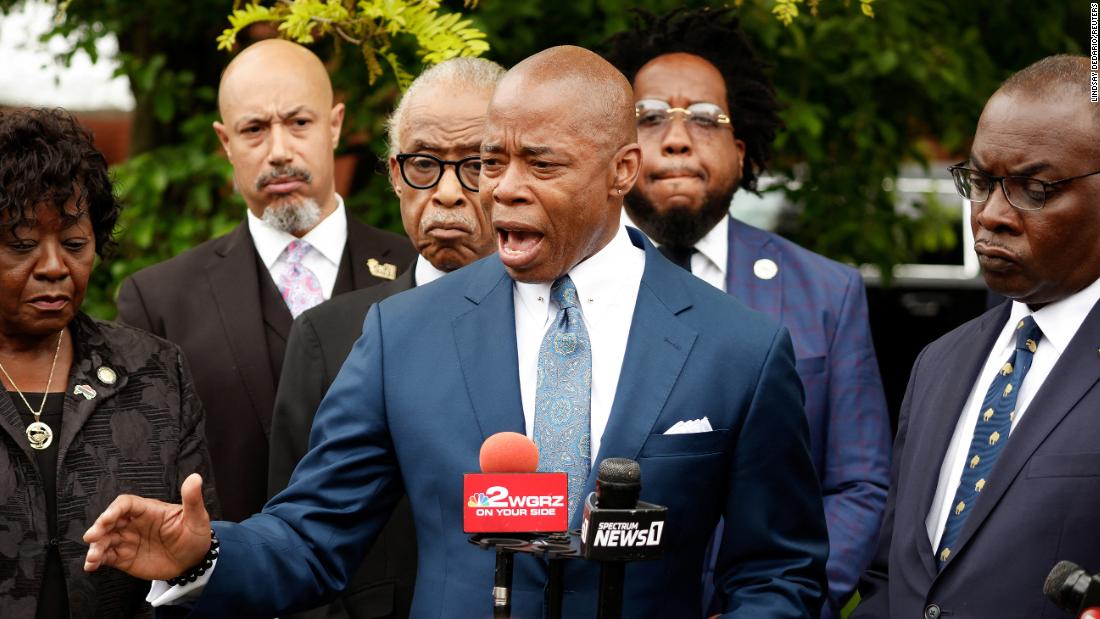 “We will work in a collective fashion to hold the lawmakers in Washington that refuse to act, and the gunmakers who put profit over the sanctity of human life, we will hold them accountable,” Buffalo Mayor Byron Brown said during Saturday’s news conference.

New York Mayor Eric Adams, who traveled to Buffalo, said while nearly 3,000 guns have been removed from New York City streets, he is calling on the federal government to create stronger laws to combat the proliferation of weapons.

“It’s not only what happened here in Buffalo New York, but it’s what is happening on Buffalo Avenue in Brooklyn and the Buffalo Avenues all across our nation,” Adams said. “That’s why I’m here in solidarity with the mayor, who has been vociferous of dealing with this sickness of the over proliferation of gun violence, and we’re going to continue to mobilize together.”

New York State Assemblywoman Crystal Peoples-Stokes, who also spoke Saturday, urged her counterparts in the state assembly to respond with legislation on the state level to combat gun violence.

“I want action. I need you to stop opposing opportunities to keep guns out of the hands of people who shouldn’t have them,” Peoples-Stokes said.

In the days after the Buffalo shooting, New York Gov. Kathy Hochul signed an executive order requiring state police to file an “extreme-risk order of protection” under the state’s red flag law when they believe a person is a threat to themselves or others. Previously, the governor said, police had the option of filing one and now “it will be a requirement.”

“We will provide law enforcement, the guidance they need, the criteria to follow,” Hochul said this month. The state’s red flag law aims to prevent anyone who shows signs of being a threat to themselves or other people from purchasing a firearm.

Following the Texas school shooting, the governor also said she wants to raise the minimum age to purchase a gun in the state from 18 to 21 years old.

“There is a strong commitment,” she said this week. “Our legislators want to work with me as the governor of the state to say, we can do more. We will do more.”

In Buffalo Saturday, the mayor noted the presence of Vice President Kamala Harris and said her decision to meet with the supermarket shooting victims’ families underscores the importance of the issue.

“Their time with the families really provided real comfort to the families,” Brown said. “Their healing is going to be hard but to know that their President and their vice president care and intend to do something to prevent this from happening to other families meant a great deal.”

Harris delivered brief remarks Saturday at the funeral of Ruth Whitfield, the oldest victim of the Buffalo shooting, and warned the nation is “experiencing an epidemic of hate.”
These are the victims of the Buffalo mass shooting

Whitfield, who was 86, had just left from visiting her husband at a nursing home when she stopped at the supermarket for groceries.

“We will not allow small people to create fear in our communities, that we will not be afraid to stand up for what is right, to speak truth, even when it may be difficult to hear and speak,” the vice president said.

CNN’s Christina Maxouris and DJ Judd contributed to this report.