Analysis: Why card-carrying members are skipping this NRA gathering 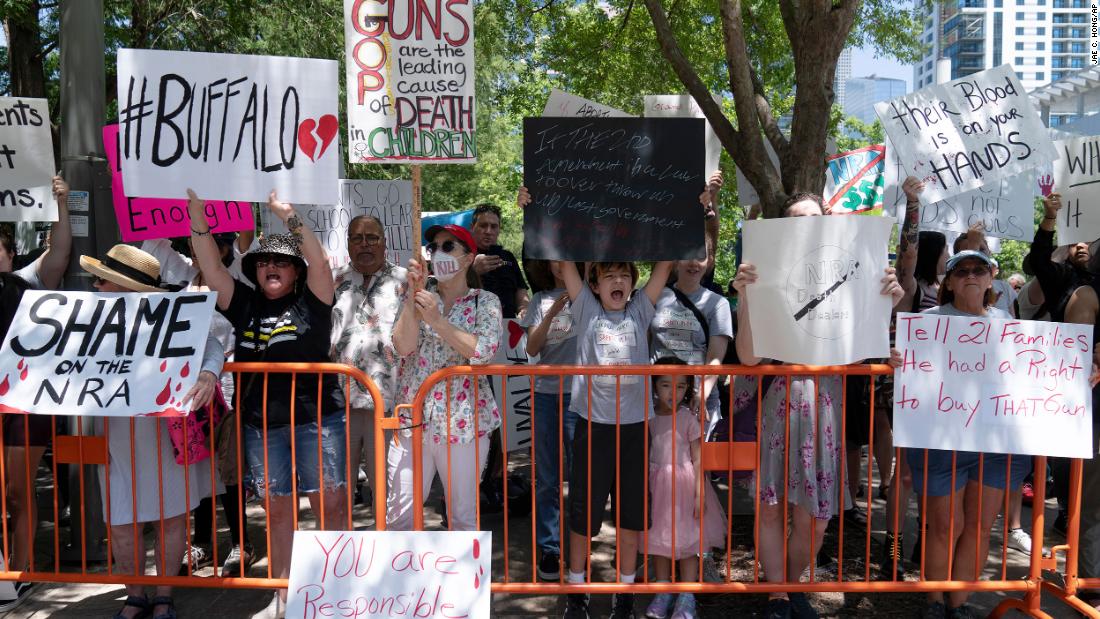 In a sign of how shock at gun violence is reverberating, Senate Minority Leader Mitch McConnell told CNN on Thursday that he had deputized Texas Sen. John Cornyn, a fellow Republican, to see if any bipartisan federal action on guns is possible.

Stay skeptical. The extent of the progress is that Cornyn said he had “touched gloves” with Connecticut Sen. Chris Murphy, a Democrat and fierce advocate of new gun laws.

Cornyn, notably, is among the Republicans to pull out of a speaking role at this weekend’s National Rifle Association annual meeting in Houston, across the state from the scene of the tragedy in Uvalde. His office cited a schedule conflict earlier this week.

That top Republicans like McConnell and Cornyn want to at least appear to be open to gun measures is full-on breaking news, even if what they might ultimately support is far from sweeping action on guns.

That the show must go on at the NRA convention is a little more true to the usual politics around gun safety versus gun rights.

Some are canceling on the NRA

The NRA’s convention will not be the event that was originally planned.

RELATED: What to know about the NRA’s annual meeting in Houston

In addition to Cornyn, Gov. Greg Abbott, Lt. Gov. Dan Patrick and Rep. Dan Crenshaw, also of Texas, pulled out of the event. Abbott canceled his in-person appearance to instead attend a news conference in Uvalde, but addressed the NRA convention via a prerecorded video message.

“God Bless the USA” singer Lee Greenwood told Fox he was canceling his performance because he didn’t want to appear to be endorsing “that weapon.”

“I didn’t think it was a good time to go down to Houston and have a party with them digging 21 fresh graves in the valley of my precious, beloved Texas,” he said.

On Friday, CNN aired audio obtained by NPR of a leaked phone call among NRA officials after the Columbine shooting, when one said of canceling the convention: “If we tuck tail and run, we’re going to be accepting responsibility for what happened out there.”
Another eerie similarity: When I was looking at recent CNN coverage of the NRA, I came across this story about how even though the organization has been hobbled by financial and legal problems, it had shed a bipartisan image and aligned almost exclusively with Republicans. The story was written in March 2021 after two mass shootings in quick succession — in Georgia and Colorado — ignited a push for new gun measures on Capitol Hill.

The cycle repeats over and over.

Not ashamed to appear in person at the NRA convention were other Republicans, including former President Donald Trump and Sen. Ted Cruz of Texas.

Earlier this week, Cruz told CNN’s Jessica Dean that people pushing anew for gun laws after the slaughter in his home state were trying to politicize the tragedy.

“You see Democrats and a lot of folks in the media whose immediate solution is to try to restrict the constitutional rights of law-abiding citizens,” Cruz said.

Here’s what happened when Mark Stone, a US correspondent for the British outlet Sky News, asked Cruz this week why the US has so many more gun deaths than other developed countries.

Stone: “But why does this only happen in your country? I really think that’s what many people around the world just — they cannot fathom, why only in America? Why is this American exceptionalism so awful?”

Cruz: “You’ve got your political agenda. God love you.”

Read more about this Cruz exchange on guns.

Whose right is it?

There has been a lot of focus this week on the gun debate in light of the abortion debate.

The Supreme Court is poised to remove the right of American women to seek an abortion in every state. Their thinking is that state legislatures should have that power.

While the newly conservative court is likely to undo abortion rights, the court views as sacrosanct people’s right to own weapons, which is written as a clause into the Bill of Rights in the context of “a well regulated Militia, being necessary to the security of a free State.”

Taking a page from a Texas law allowing citizens to sue people who facilitate abortions, California lawmakers voted to allow people to sue those who make or sell so-called ghost guns and illegal assault weapons.

CNN’s Alisyn Camerota asked Texas state Rep. James White why the Texas legislature doesn’t use the same creativity it has shown in protecting unborn embryos to protect kids from being gunned down at school.

“Use that same blueprint that you used for your abortion law,” Camerota suggested as an example. “Make there be waiting periods, make them have to come back to the scene more than once, make them have to answer questions. Why can’t you protect living 10-year-olds?”

“We have this thing called the Constitution,” White said in answer. “What we really need to be looking at is, whether it’s in Buffalo or whether it’s in Uvalde, is these young men for some reason that have some very disturbed emotional state.”

There, too, Texas is lacking. In April, the state cut funding from the department that oversees mental health programs, according to an NBC News report.

You’ll hear that refrain from those who still choose to attend the NRA meeting this weekend, that mental health is the key to stopping shootings. You’ll hear the allegation that Democrats are politicizing the shooting. And you’ll hear the argument that more school officials need weapons.

What you won’t hear is “God Bless the USA.”