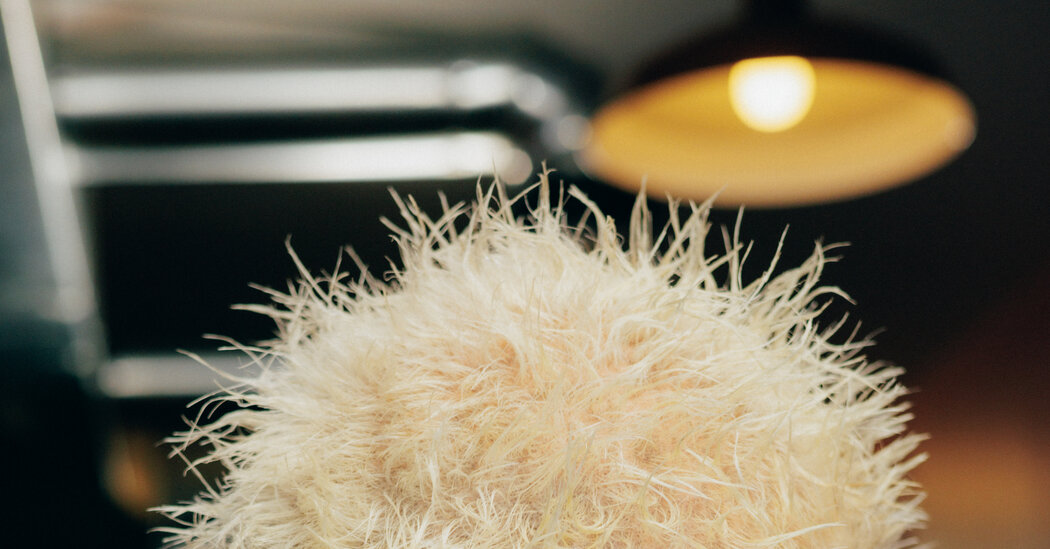 This weekend, listen to a collection of narrated articles from around The New York Times, read aloud by the reporters who wrote them.

In the 15 years since he began “Diners, Drive-Ins and Dives,” his Food Network flagship, Guy Fieri, 54, has become perhaps the most powerful and bankable figure in food television, the éminence grise of the eminently greasy. And by dint of that show’s success — and Mr. Fieri’s runaway celebrity, and that golden porcupine of hair, and maybe that one review of his Times Square restaurant a while back — certain perceptions have attached to him through the years, perpetuating the caricature he still often seems eager to play.

“If you only hear Metallica as a heavy-metal band, then you are not hearing Metallica,” Mr. Fieri said, riding shotgun after a day of filming and charity work. “Now maybe you don’t like that style. But they’re real musicians.”

Riley San Miguel said her son, Kru, was barely a month old when he started crying all the time, not wanting to eat. When he developed a fever, he was quickly admitted to an intensive care unit. His spinal fluid was infected with bacteria, and it was spreading to his brain. The doctors believed it had probably come from his infant formula.

The baby underwent the first of several operations on his brain to control escalating seizures and swelling. Eventually, most of the right side of his brain had to be removed.

Her son, she learned, had been exposed to Cronobacter sakazakii, a deadly bacterium that is often linked to babies who consume powdered formula and can cause serious brain damage, developmental disabilities and death.

While most of the attention has currently been focused on fixing the dire supply shortfall, regulators are confronting deeper issues of safety that persist in the manufacturing of powdered infant formula.

Two years ago, a veteran Minneapolis police officer murdered George Floyd, a Black man, on a busy street in broad daylight and set off racial justice protests around the globe. Minneapolis promised to set an example.

Since then, the city’s mayor, Jacob Frey, has ordered a host of policy changes to rein in the police, including banning chokeholds, restricting no-knock warrants and traffic stops and stepping up discipline for misconduct.

But the department has repeatedly been caught violating the mayor’s edicts — killing a man in a no-knock raid, using “warrior-style” training for recruits and, according to a new investigation, escalating encounters with the public to the point that the use of force is required.

Even as it tries to remake its police force, the city is grappling with the same crime spike as the rest of the country — violent crime in Minneapolis is up 36 percent this year over the same period in 2019 — and is combating it with an officer corps depleted by the coronavirus pandemic and low morale.

Randall Poster had never noticed the songbirds of the Bronx, where he has lived for most of his 60 years, until people started to quiet down earlier each day as the first pandemic winter approached in 2020.

But when Poster — a powerhouse music supervisor for filmmakers like Martin Scorsese, Todd Haynes and Wes Anderson — began talking about the birds he could hear, an environmentalist pal offered grim news. Human interactions alone possibly kill over 500 million birds each year in the United States. According to a 2018 report, one in eight of the world’s bird species now risk extinction. Common chemicals can ruin the very songs Poster suddenly loved.

These statistics sparked an idea: What if he harnessed a quarter-century of industry connections into a fund-raiser for bird conservation, integrating the melodies he heard?

Written and narrated by John Leland

Many New Yorkers have returned to their workplaces, or never stopped going to them. But for those contemplating the transition now, and for their dogs, a day of reckoning has arrived.

More than 23 million American households added a cat or dog during the pandemic, according to the A.S.P.C.A., and many of those animals have never known what it is like to be left alone all day.

Dogs in city apartments have always had to adjust to less-than-ideal conditions, but the return to work has meant that suddenly thousands are going through the same transition at the same time, said Kate Senisi, the director of training at School for the Dogs in Manhattan’s East Village. “We’ve had a lot of separation cases coming through,” she said.

Want to hear more narrated articles from publications like The New York Times? Download Audm for iPhone and Android.