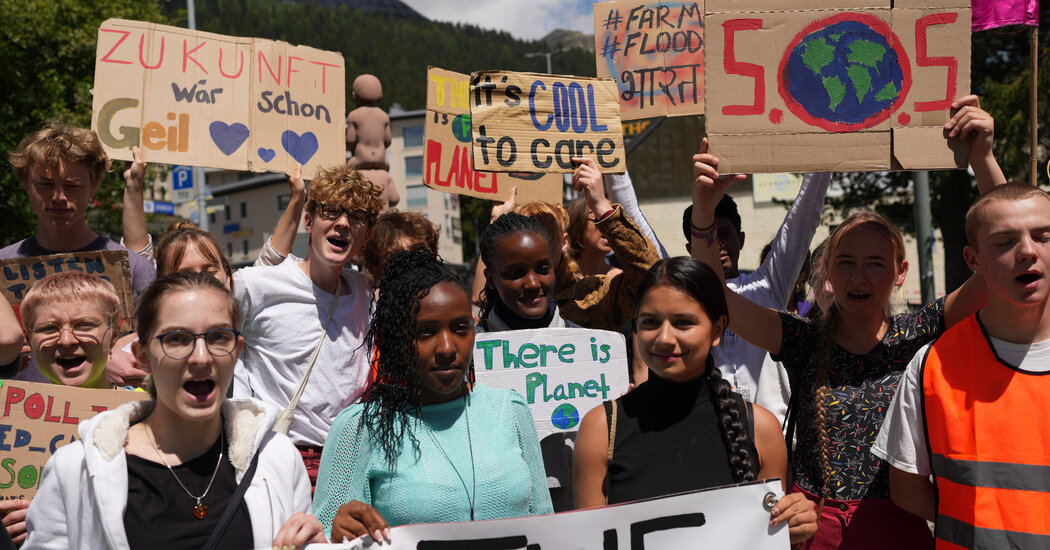 DAVOS, Switzerland — I write to you today as a parent. A terrified American parent.

It was Al Gore, the former vice president, who drew a straight line between gun policy and climate policy. He spoke with the conviction of a man who knows American politics from the inside, and he spoke with anger and grief. And I felt that terror inside, that question I try to keep at bay at times like this, when I must stay focused on something else: Is my child safe in school back in the United States?

“Some of the same reasons why the United States has been incapable of responding to these tragedies are the same reasons — lobbying, campaign contributions, the capture of policymaking, the control of politicians with money, lobbyists — that it has been impossible to pass climate legislation,” Gore said. “Our democracy has been paralyzed, bought, captured. It has to stop.”

If you haven’t yet, have a look at this extremely informative piece by my Times colleagues, showing where each Republican senator stands on gun control legislation. As my colleague Carl Hulse wrote, the reality is that many Republicans may be open to new gun laws, but would risk losing their jobs if they openly supported them.

Back here in Davos, a child, or anyone else, listening to the official panels and news conferences could come away with the sense that the powerful grown-ups here, titans of industry and government, were really taking care of their future. Climate change and what to do about it dominated many of the sessions.

Except that in reality, oil and gas companies are making soaring profits. Even companies with their own ambitious targets to reach net-zero (the point where their activities no longer add greenhouse gases to the atmosphere) are continuing to fund trade associations that undermine climate legislation in the United States, history’s largest emitter. Money promised to poor countries by rich ones hasn’t fully materialized.

All the while, extreme weather, supersized by climate change, brought suffering to millions of people. A punishing heat wave in India and Pakistan, followed by flooding. Devastating rains and mudslides in South Africa. Fire and drought in the American West.

“There’s a huge disconnect between what is going on in there and what is being demanded by the people out here,” the Kenyan climate activist Elizabeth Wathuti, 26, said on Thursday at a protest outside the forum venue. “It’s not OK for leaders and companies to continue to say one thing and do another. Lives and livelihoods are at stake. What is needed now is honesty and dignity out of respect for the people who are on the front lines of this crisis.”

The Russian invasion of Ukraine, and the rush to secure oil and gas supplies from anywhere other than Russia, dominated the forum. Europe is striking gas deals from Angola to Qatar. The United States is ramping up gas exports. Amin Nasser, chief executive of Saudi Aramco, the world’s biggest oil company, told the conference that, rather than being on the wrong side of history, oil majors are “on the right side of reality.”

Raj Shah, president of the Rockefeller Foundation, was plain-spoken about the disconnect. “The Russia-Ukraine war has set back the cause of reducing the world’s dependence on fossil fuels for the short term.”

That short term could be 10 years, maybe less, he said. But it would have an immediate effect on the world’s ability to slow down warming, because what big historic emitters like the United States and Europe do today shapes what big future emitters, like Indonesia, Brazil or India, will be willing to do, starting today. Efforts to persuade those countries to pivot from coal, Shah said, are “naturally undermined by Western investment in fossil fuels.”

That will, no doubt, shape the future of all our children.

Join us for a Times virtual event

The global south contributes little to climate change yet suffers disproportionately from its effects. Join The New York Times and leading experts for “Closing the Gap on Climate Inequity,” where they’ll share their visions for an equitable, climate-resilient future.

Before you go: Tough times for India’s king of fruits

From kebabs to refreshing drinks, mangoes are everywhere in India. But the hottest March in 122 years has devastated crops, leaving farmers dumbstruck. “I have never witnessed this phenomenon before in my lifetime,” one mango farmer said. Sadly, it may not be the last time: Research shows the chances of a heat wave like the current one have increased by at least 30 times since the 19th century.

Thanks for reading. We’ll be back on Tuesday.

Reach us at climateforward@nytimes.com. We read every message, and reply to many!