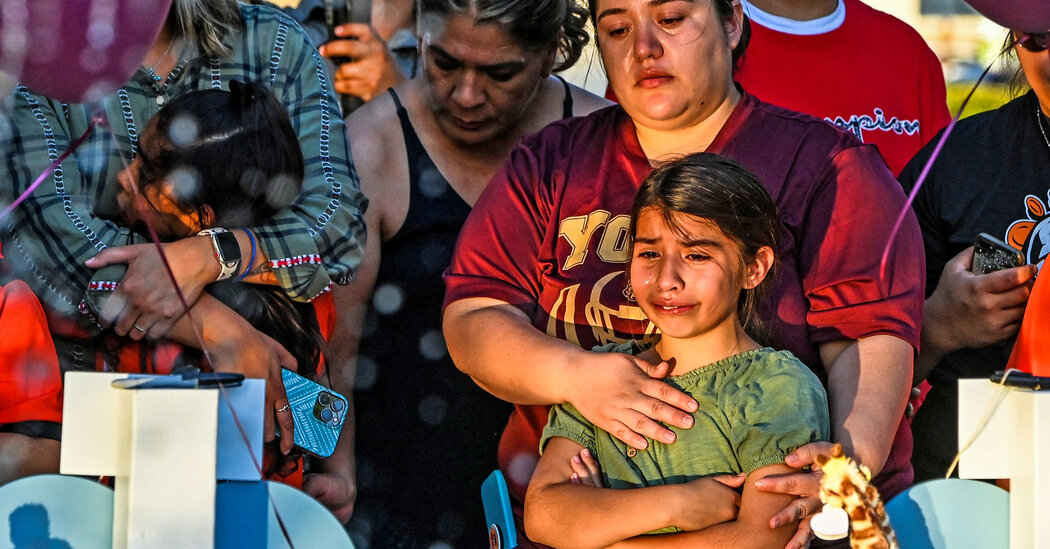 In Aeschylus, Agamemnon lures his daughter, Iphigenia, to a spot she thinks is for her wedding, as the chorus urges: “Hoist her over the altar like a yearling, give it all your strength … gag her hard.” Agamemnon agonized but felt he had to sacrifice his daughter to appease a goddess and be granted favorable winds to sail against Troy. Small sacrifice to get your fleet moving.

In Shakespeare, Titus Andronicus kills his daughter, Lavinia, at the dinner table, after she has been raped and maimed by attackers. “Die, die, Lavinia!” he cries. “And thy shame with thee.” Small sacrifice to save your honor.

On “Game of Thrones,” Stannis Baratheon orders his sweet child Shireen burned at the stake, as she cries out for the father she adores, so black magic will melt the snows. Small sacrifice to get your starving army on the march.

Now, however, I think of child sacrifice as a modern phenomenon, a barbaric one that defines this country. We are sacrificing children, not only the ones who die, but also those who watch and those who fear the future.

Children having their tomorrows taken away. Small sacrifice if we can keep our guns. Why not let every deranged loner buy an assault weapon?

America is not a mythical kingdom ruled by fickle gods or black magic. Our fate is not in the stars. It is in ourselves. It is within our power to stop schools from becoming killing fields.

We have simply decided not to do it.

The shooter in Uvalde slipped into a fourth-grade classroom at Robb Elementary School, ominously announced, “Look what we have here” and fired more than 100 rounds.

The local police did nothing to stop the human sacrifice. Nineteen officers loitered in the hall for as long as 78 minutes as children died. How can you justify keeping assault weapons on the open market when police officers don’t engage with them, even with kids’ lives on the line?

As the officers waited, not bothering to break down a barricaded door, the 19 lambs went to slaughter, trapped in a blood-soaked classroom with an 18-year-old madman. In a haunting tableau, one little girl smeared herself with her dead friend’s blood to appear dead. Meanwhile, desperate parents tried to climb over a chain-link fence to save their children. The police, doing nothing more useful, kept busy by handcuffing at least one parent trying to get into the school.

A slain teacher’s husband died of a heart attack after he took flowers to her memorial at the school. They had four kids. Who will take care of them?

Gov. Greg Abbott of Texas coldly said of the massacre, the sixth mass shooting in his seven years in office, “could have been worse.” Donald Trump, who once told me if he were elected president, he would get in his limo and drive down to the National Rifle Association and bargain with it until he could get agreement to some common-sense solutions, spoke to the N.R.A. convention in Houston Friday evening and spouted gun lobby talking points — small price for the tens of millions it spent to get him elected. What a sociopathic jellyfish. It was sacrilege for him to make it seem as though the N.R.A. cared by reading the names of the dead children and teachers, with a bell gonging after each name.

What is wrong with this country? Republicans think they’re showing their toughness by preventing curbs on guns. But it’s a huge American weakness.

When a gunman killed 35 people in Tasmania in 1996, the Australian government passed such common-sense gun laws six months later that there has been only one mass shooting since. More than a million firearms were destroyed.

When an anti-Islamic extremist in Christchurch killed 51 people in two mosques in 2019, the New Zealand government banned most semiautomatic weapons 26 days later. There have been no mass shootings since.

As the inspiring New Zealand prime minister, Jacinda Arden, said at the time, she could not have faced the surviving victims and told them “our system and our laws allow these guns to be available and that is OK.”

The political debates here are empty and soulless, with Democrats dodging the issue and Republicans hardening even on mild proposals like universal background checks, which has overwhelming public approval.

“Most Republicans in the Senate represent deeply conservative states where gun ownership is treated as a sacred privilege enshrined in the Constitution, a privilege not to be infringed upon no matter how much blood is spilled in classrooms and school hallways around the country,” Carl Hulse wrote in The Times.

Republicans throw up a fog of nonsensical suggestions. Before speaking to the N.R.A. Friday, Ted Cruz said schools should have only one entry point, with an armed guard. Guns don’t kill people. Doors do. During his speech at the N.R.A., Trump suggested turning schools into virtual jails and letting teachers pack pistols in class.

“Meaningful policy discussions over guns or voting or public health have left the room,” said my colleague Elizabeth Williamson, author of the new book “Sandy Hook: An American Tragedy and the Battle for Truth.” “Spewing conspiracy theories and bench-clearing nonsense around mass shootings, elections and coronavirus is becoming a tribal signifier for some on the right.”

The Republicans are doing everything they can to stop women from having control over their own bodies and doing nothing to stop the carnage against kids; they may as well change the party symbol from an elephant to an AR-15.

America is stuck in a loop on guns — and it’s a fatal one. This country always cherished its frontier image, Gary Cooper in “High Noon,” shooting it out with the bad guys. But now when the bad guys start shooting, lawmakers just shrug.

We’ve become a country of cowards, so terrified of the unholy power of gun worship that no sacrifice of young blood is too great to appease it.