These are the world's smallest remote-controlled walking robots 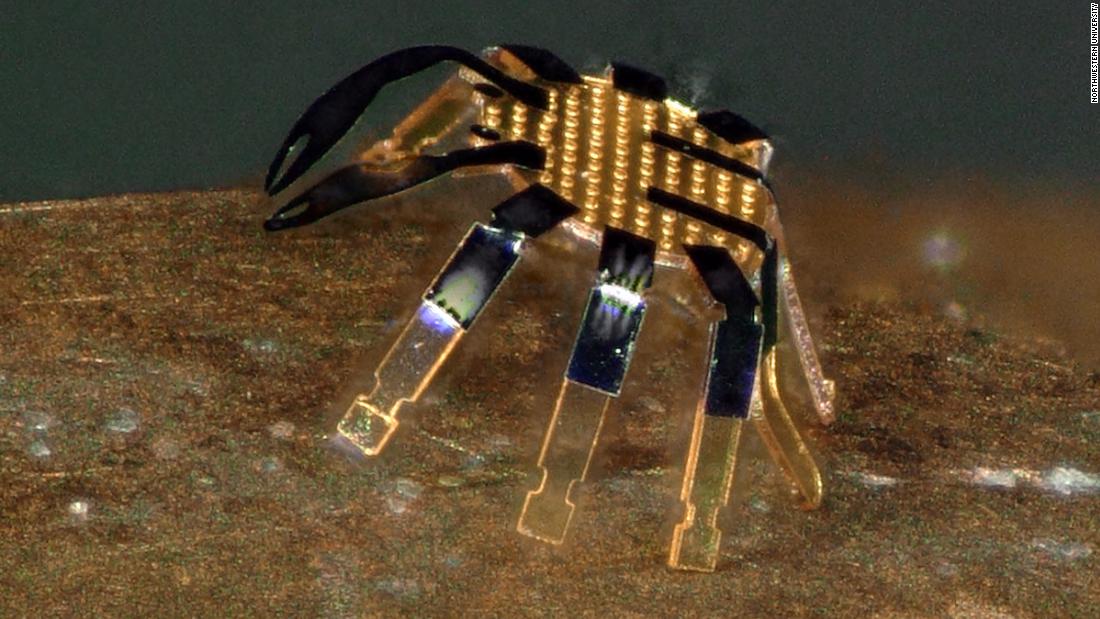 Engineers at Northwestern University in Evanston, Illinois, invented the world’s smallest remote-controlled walking robot, according to research published in the journal Science Robotics.

Each one is about half a millimeter wide, which is smaller than the thickness of a United States penny.

It took a year and a half to create the miniscule metal creatures, said coauthor John A. Rogers, the Louis Simpson and Kimberly Querrey Professor of Materials Science and Engineering at Northwestern University.

His team was comprised of students across varying academic levels who combined critical- and creative-thinking skills to design robots that looked like crabs as well as other animals like inchworms and crickets, he said.

Some students found the sideways motion of crabs to be amusing, which was the inspiration behind the crab robot, Rogers said. The tiny robot can also twist, turn and jump, he added.

Bringing the robots to life

The robots, which are made of a malleable shape-memory alloy, start out as flat objects, similar to a piece of paper. The legs and arms are bent so the robot can stand, he said. The crab stays standing on its legs until heat is used to get the crab to move, Rogers said.

A metallic object made of shape-memory alloy can be deformed but returns to its original shape once heat is applied to it, he explained.

The “original” shape of the crab is when it’s flat while the “deformed” state is when the arms and legs are bent.

The crab stays standing on its legs until the heat from lasers are used to get the crab to move, Rogers said.

His team would heat up certain joints to partially return them to the original flattened state. When heat was applied over and over in a specific sequence, the crabs were able to move, similar to how humans bend and straighten their legs to walk.

Lasers were used to apply heat to different parts of the crab robot to create movement, according to Rogers.

“A laser is a convenient way to do it because we can focus the light to a very tiny spot, and we can scan that spot around to illuminate different parts of the robot’s body in a time sequence,” he said.

The robots are still in the developmental phase and primarily created for academic purposes, but the technology used to make the tiny crabs have potential, Rogers said.

Tiny crab robots could be used in performing minimally invasive surgeries or aid in the assembly and repair of small-scale machines, he said.

In the meantime, Rogers has challenged his team to expand on the robot’s capabilities.

“As an aspirational goal, I asked the students to see if they could come up with a way to make these robots take flight — maybe impossible, but fun to think about,” he said.