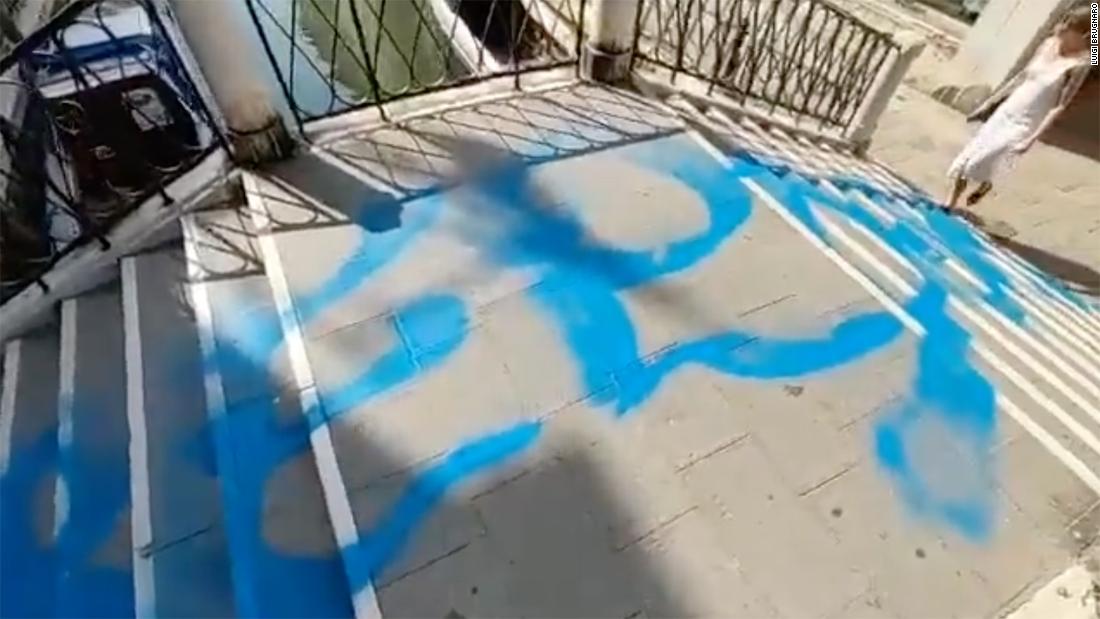 (CNN) — Summer in the northern hemisphere is hotting up, travel chaos reigns, and tourists are intent on having some “revenge travel.”

And in Venice, that makes for a perfect storm of visitors behaving badly.

The past couple of weeks have seen a slew of tourist transgressions in the city, from skinny dipping in the UNESCO-preserved canals to vandalizing one of the city’s iconic churches.

On the night of May 15-16, the façade of the Redentore church — designed by Renaissance “starchitect” Andrea Palladio, and the site of perhaps the city’s most famous festival — was vandalized.

The vandals daubed a patch of the facade in pink.

A portion of the façade — built in white Istrian stone, from what was part of the Venetian empire when the church was constructed — was daubed in pink, with what looked like an equation scrawled on top of it.

The three-square-meter area sits beneath the statue of St. Francis of Assisi, just to the right of the entrance as you ascend its famous white-stone staircase.

A local who attempted to clean it off is then said to have caused further damage by using water, which helped the color permeate deeper into the porous stone. It is now being tackled at by government-employed art restorers.

It follows the vandalism of another Venice church, Sant’Antonin, which was daubed with graffiti a few days earlier, according to local paper La Nuova.

Meanwhile, another self-styled artist poured bright blue paint over a bridge on Fondamenta dei Garzotti, one of the the main streets into the city from the train station. It appeared to spell out the word “freedom.”

And on Thursday night, two American tourists decided to strip off and dive naked into a canal in the residential district of Castello.

Shocked locals observed them swimming for around five minutes in the water — into which nearby houses drain their sewage — before toweling down and returning to their Airbnb.

The CCTV cameras dotted around have helped solve some of the issues. Authorities have already tracked down the person responsible for vandalizing the Redentore church, accompanied by two friends.

Fondamenta Garzotti before the vandals arrived.

They were part of a street art event taking place earlier in the day, according to the city council. The authorities scoured social media to see who might be the culprit, and found one street artist whose signature work is creating equation-style designs.

And police are now looking for CCTV footage of the skinny dippers.

Mayor Luigi Brugnaro called the vandalism a “scar” on the basilica, which he called a “symbolic place of Venetian traditions.”

“Those responsible must not go unpunished, they must pay!” he wrote on Twitter, calling for more powers to be given to justices of the peace.
Tweeting a photo of the damage to the Rio Marin bridge, he added: “It will take hours to restore at a cost we can’t yet calculate. We should keep these barbarians in a cell for at least a couple of nights.”
“Enough of this havoc,” wrote the mayor after another incident — a religious statue being destroyed in Marghera, on the Venice mainland.

“The city must be respected.”