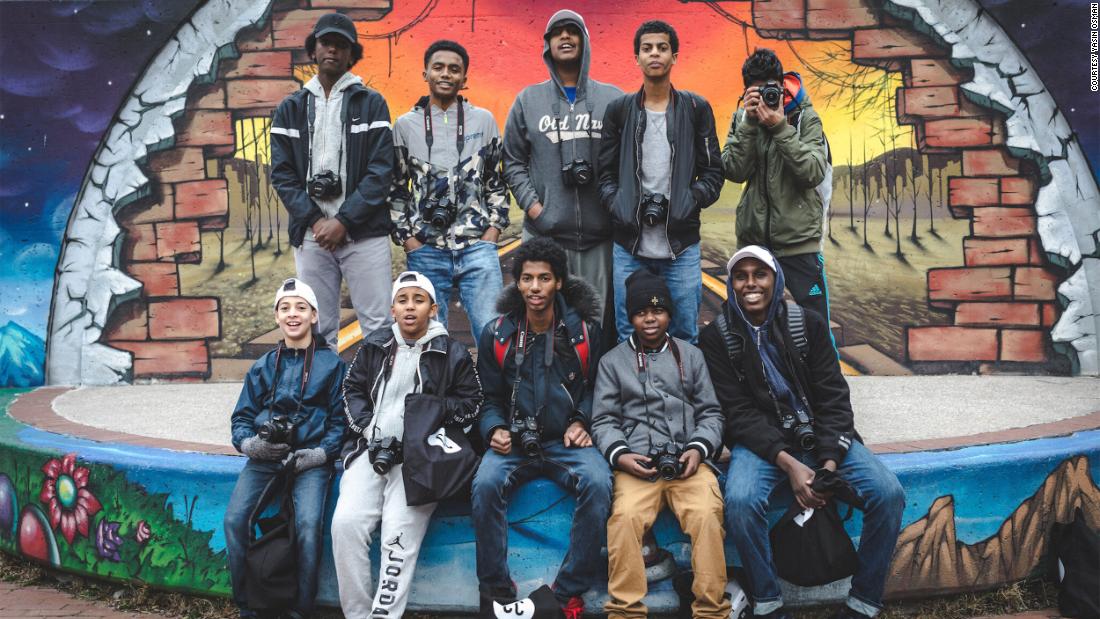 Kareema Hassan was at her local mosque in Toronto, Canada, for a nightly prayer called Taraweeh — camera and tripod in tow — when she captured a striking sign of the times.

It was the end of the holy month of fasting, Ramadan, in the spring of 2021. Government restrictions imposed in response to the coronavirus outbreak had just partially lifted, allowing a limited number of people to enter the building. Hassan, then 19, found herself next to a Quran bookshelf that had been blocked off with yellow caution tape to prevent the spread of infection through contact with the books, and the sight struck her as a stark reminder of life’s fragility.

Students Yassir Ahmed, Safa Hassan and Samira Abdi pose with photographs they made as part of the mentorship program. Credit: Courtesy Yasin Osman

She caught the moment in a stunning photograph titled “Yellow tape” that was part of the latest exhibition for Shoot for Peace, a grassroots mentorship program that teaches photography to at-risk young people in Toronto.
“It was one of the images that people were most attracted to at the exhibition,” said Yasmin Osman, the photographer and illustrator who started Shoot for Peace in 2015, when he was 22 years old. The name of the program is meant to evoke the dual meaning of “shoot,” which applies to both guns and cameras.

“I grew up in Regent Park in Toronto; my mom raised me by herself. There was a lot of gun violence in the neighborhood,” Osman said in a phone interview. “When I was 14, the neighborhood started getting torn down — there was a revitalization happening in the community, and I was documenting that with my mom’s cell phone.”

After high school, Osman was working as a preschool teacher, and was tasked with taking photos of the children using a reflex camera. He enjoyed it, and started documenting the neighborhood.

“My identity in the community became ‘that guy who takes photographs’; it became a side hustle,” Osman said. Eventually, that side hustle grew into a full-time career, and he left teaching behind. He’s since worked with major brands, and his exhibition “Dear Ayeeyo,” a tribute to his Somali grandmother, has toured internationally. But the desire to help young people stayed with him.

“So I was thinking to myself… how can I combat some of the issues that are happening in the neighborhood because of the gun violence?” Osman said. “And arts programming wasn’t something that existed too much, especially for boys.”

At first, Osman focused on working with boys. He approached a group of them hanging out near a basketball court, and offered to teach them how to take better photographs with their cell phones. “Does that mean we’re going to get likes on Instagram?” they asked, and that’s how the program started.

Photographer and cartoonist Yasim Osman, who founded “Shoot for peace” in 2015, with a group of students. Credit: Courtesy Yasin Osman

Soon after, Shoot for Peace expanded with a course designed particularly for girls, and the program has since developed into a charity that allows anybody across the globe to volunteer or contribute by sending donations and purchasing items, making the opportunity absolutely free to students. The weekly course runs each year from January to September, when a joint exhibition takes place showcasing the work of all students, who range in age from 15 to 22.

The program is highly sought-after: More than 100 applications were filed for each course last year, but classes are limited to a maximum of 10 pupils. “Those who have not been accepted still have the opportunity to come to our studio space, get to know people and hang out,” Osman said. “It’s become something that people want to attach themselves to, because it oozes positivity and love.”

“Me, myself and I” by Huda Hagi (2021). In the picture, a girl holds a flower up and the only other thing shown is her shadow, tracing a parallel with the sense of isolation felt by many during the pandemic. Credit: Courtesy Huda Hagi/Shoot for peace

Some students from early cohorts have gone on to become professional photographers or YouTubers, although for many participants, the goal is just to make new friends or acquire a new skill. “Shoot for Peace has really created a family amongst us, and youth from different neighborhoods — some of them even in conflict, probably not able to be seen together outside of our space — are friends, hanging out together, really creating a sense of community,” Osman said.

Even for Osman, photography isn’t everything. He is also a cartoonist for the New Yorker, and he has Shoot for Peace to thank for it. It all started with a chat with a student who was inclined to take up painting but didn’t want to jeopardize his photography studies. That helped Osman understand that diverse interests can coexist, and he encouraged the pupil to pursue both. Following his own counsel, he started drawing again — a passion he had put aside to concentrate on photography — and sent his work to the magazine, which accepted it.

But don’t pin him down as a photographer and a cartoonist just yet. “A really important piece of my artistry is to be able to express how I actually feel through any medium,” he said. “Today it can be cartooning, but tomorrow it can be something else.”

Top image: “Yellow tape” by Kareema Hassan (2021). Shot at the end of Ramadan 2021 as coronavirus restrictions were partially lifted in Toronto, it’s meant as a reminder of the fragility of life and the importance of showing gratitude for the places, people and things we love.