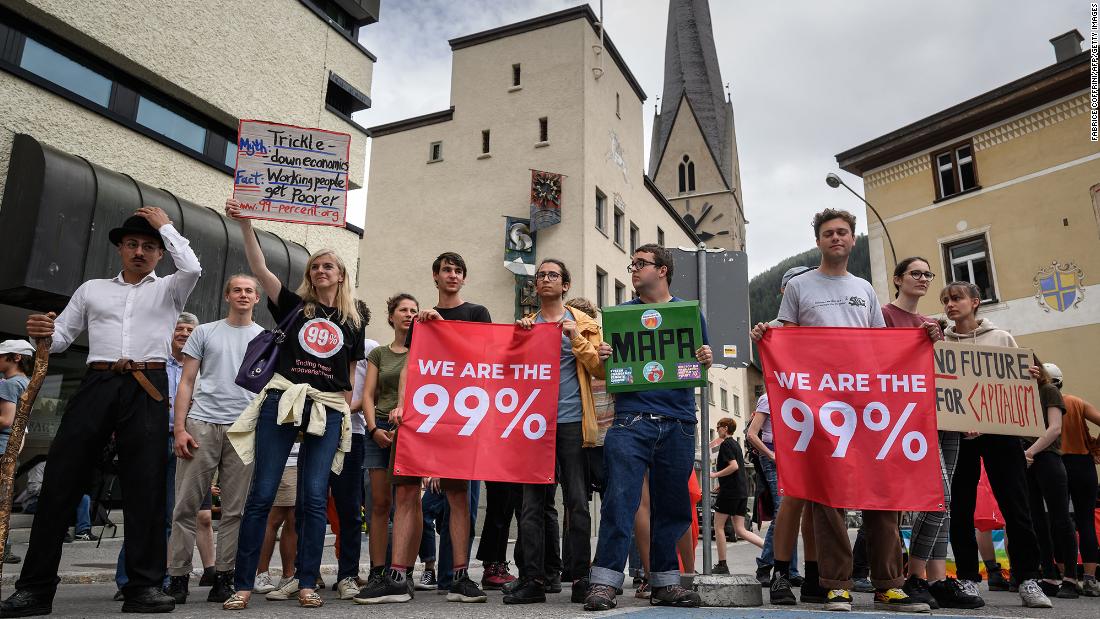 “There needs to be resource mobilization to deal with those situations — those extreme situations — we’re dealing with now,” Bucher said on the only panel on taxation on the official Davos program. “Something that can really change things is tax.”

Given the magnitude of the crisis, governments must think seriously about taxing wealth accumulated by the world’s richest people, Bucher told CNN Business. Even taxing wealth at relatively low levels, she emphasized, could make a big difference.

According to Oxfam, a 2% tax on assets greater than $5 million, graduated to 5% for net worth above $1 billion, could raise $2.5 trillion worldwide.
This idea of more progressive taxation gained traction during the pandemic, as the rich saw their fortunes leap while millions of others were left behind. Oxfam estimated in a report released ahead of Davos that some 573 people have joined the billionaire ranks since 2020, bringing the global total to 2,668.

Yet wealth taxes failed to generate much conversation in the Swiss Alps this week, even as attendees sounded the alarm on the looming hunger crisis.

“We haven’t seen a huge history of success,” for wealth taxes, OECD Secretary-General Mathias Cormann said during the panel debate. “It’s true that on the perceived fairness and equity front — in terms of the politics of it — it’s attractive, but in terms of what it actually achieves in substance, it’s not that attractive.”

UN World Food Programme Chief David Beasley told CNN Business that climate change and the war in Ukraine could generate widespread famines later this year. That would result in the destabilization of many countries and could trigger mass migration.

“What breaks your heart is that there’s $430 trillion of wealth on Planet Earth today,” Beasley said. When his organization “doesn’t have enough money,” he continued, it has to “choose which child eats.”

Last year, Beasley got in a Twitter clash with Tesla (TSLA) CEO Elon Musk after he called on him to put up 2% of his fortune, which he said would solve world hunger. Beasley told Reuters this week that he remains hopeful that Musk or another wealthy individual will step up, and said he remains willing to engage.
He probably shouldn’t count on Musk. On Twitter Thursday, Musk said, “Use of the word ‘billionaire’ as a pejorative is morally wrong and dumb,” and he agreed with a comment that billionaires are at their most nefarious when spending their money to “do good.”

But as the surging cost of living becomes a major problem for lower-income households in both developed and developing nations, governments are increasingly willing to implement measures they’d eschewed previously.

The UK government on Thursday did a policy U-turn and introduced a $6 billion tax on the profits of its oil and gas companies to fund help with energy bills, bowing to pressure from campaigners who pointed out that many Britons now had to choose between “heating and eating.”

At the forum, wealth taxes remained a B-list talking point. For Phil White, a British millionaire who traveled to Davos for a small protest that called for higher taxes on the wealthy — himself included — that was a missed opportunity.

“We’re going to see rising inequality from both rising energy and food prices,” White said. “Wealth taxes can play an immediate part in doing something about that.”