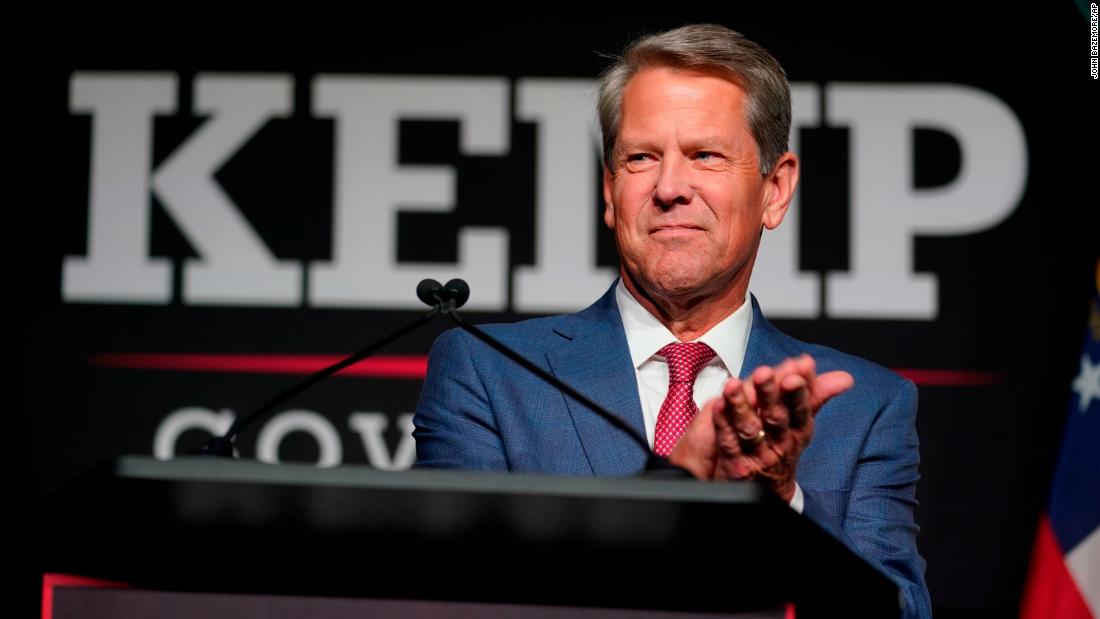 “Just about every ‘stop the steal’ Republican is getting rejected by Republicans in Georgia tonight,” Erick Erickson, the conservative radio host, tweeted Tuesday night just before taking the stage to emcee Kemp’s victory party. “The message is voters want to move forward, not settle Trump’s grievances for him.”

But over the past 18 months, Trump’s vendetta against Kemp got personal, threatening the governor’s ability to maintain support from a GOP base still very much enamored with the former President. Trump publicly railed against Kemp, insulting him as a “Republican in name only” and the “worst governor in America.” He openly sought a formidable primary challenger to Kemp and even suggested that Stacey Abrams, Kemp’s Democratic opponent in 2018 who will challenge him again this November, would be a better governor.

From the beginning of the cycle, people close to Kemp’s campaign told CNN the governor’s battle plan was simple: Ignore the attacks from Trump, tout his existing record, run as an unabashed conservative and emphasize the future.

The team around Kemp honed this strategy as early as January 2021, when it became clear Trump’s relentless attacks on the governor following the presidential election weren’t going to let up.

“As it became clear to us that he was not going to move on, we made a determination that, if you want to win an election, we are going to have to have people who like Trump also like us,” one Kemp aide told CNN. “We had to give Trump supporters permission to like both of them.”

In a few words at his Tuesday night victory party, Kemp summed up his approach.

“Even in the middle of a tough primary, conservatives across our state didn’t listen to the noise. They didn’t get distracted. They knew our record of fighting and winning for hard-working Georgians,” he told supporters at the College Football Hall of Fame in downtown Atlanta. “Georgia Republicans went to the ballot box and overwhelmingly endorsed four more years of our vision for this great state.”

Kemp’s example could provide a guidebook for Republicans who find themselves in Trump’s crosshairs, particularly in a potential primary matchup with the former President if he runs for the White House in 2024.

“I do think it’s a prescription for others to focus on your record and the problems you’re going to solve,” said Marc Short, an adviser to Kemp’s campaign who was chief of staff to former Vice President Mike Pence.

Last fall, Kemp was already anticipating that Perdue would soon jump into the race with the full force of the Trump political machine behind the former US senator.

Kemp’s team found inspiration for handling Trump in the Virginia governor’s race in 2021, when Republican candidate Glenn Youngkin won in a state Trump had lost a year before by more than 10 points. Youngkin ran as a forward-looking conservative who enjoyed Trump’s endorsement but kept the former President at arm’s length.

Notably for Kemp advisers, Youngkin never adopted the idea of a “stolen election” that gripped the most fervent parts of the Republican grassroots at the time.

“It shows that ‘stop the steal’ isn’t the winning formula for purple states,” the Kemp aide told CNN in November as the Virginia results were coming in. “And that’s what Perdue would have to embrace.”

Kemp had none of the support from Trump that Youngkin enjoyed to keep MAGA voters in the fold, but he did have something the Virginia Republican lacked: a record, and one that gave Republicans a lot to like.

“Brian had the added challenge of the President wanting to make this race a focal point, but the governor didn’t focus on those attacks and instead focused on one conservative achievement after another,” Short said.

As the sitting governor, Kemp pushed through conservative agenda items in a legislative session that ended 50 days before the primary. In the final stretch of the race, Kemp could point to a massive income tax cut, loosened restrictions on concealed carry of firearms and a prohibition on teaching “divisive concepts” regarding race in public schools — all new laws on top of accomplishments from earlier in his term.
Short said Kemp was one of the first Republican governors to stand up to “woke” corporations that pushed back against the GOP policies, in some cases years before Florida Gov. Ron DeSantis took on Disney over its objection to the state’s recent ban on certain instruction about sexual orientation and gender identity in the classroom.
In 2019, Kemp signed into law a ban on abortions when a fetal heartbeat is detected, prompting Hollywood film and TV companies to threaten to pull production from Georgia. And in 2021, Kemp helped enact a new elections law criticized as restrictive by many, including Major League Baseball, which moved the All-Star Game from Atlanta to Denver in protest.

“Even when they pulled the All-Star Game from us, I did not waver, as I told you I wouldn’t,” Kemp said Monday at an election eve rally in Kennesaw.

On the trail, Kemp also pointed to his approach to the coronavirus pandemic, boasting that Georgia was among the first states to end initial lockdowns and to resist mandates on masks and vaccines.

“(We) started pushing to be one of the first states in the country to get our kids back in the classroom,” Kemp said Monday in Kennesaw.

The effect was the creation of a wealth of goodwill among Republican voters toward Kemp, including among those inclined to be angry at him for not acquiescing to Trump on overturning the 2020 election. Even committed Perdue supporters said before the primary they would support Kemp if he won renomination.

“I would have to vote for him,” said Kelly, a voter from Watkinsville who declined to give her last name when she spoke to CNN earlier this month.

That illustrates something else that boosted Kemp in the primary: the prospect of Abrams becoming governor. Her narrow defeat in 2018 sparked fears among Georgia Republicans that their grip on the state had loosened. Joe Biden’s win in 2020, followed by the twin Democratic victories in the US Senate runoffs in January 2021, confirmed those fears.

So when Trump rallied in Georgia last September and, in the middle of a rant about Kemp, said he would prefer Abrams as governor, Republicans in the state recoiled.

It also indicated that Trump’s interests in Georgia — namely, revenge against Kemp — did not align with those of the state’s GOP voters.

“I think that the former President has no skin in the game in Georgia,” Carol Williams, a realtor in Athens and a Republican voter, told CNN at a Kemp event on Saturday. “He does not understand what’s best for our state. We have stayed open. We’ve done the right thing here in this Covid. His endorsements need to stay more so in Florida.”

While Kemp’s win against Trump via Perdue is conclusive, it remains to be seen whether Republicans who may challenge Trump’s hegemony over the GOP more directly — say, in a presidential primary — can have as much success with the same strategy.

But the future of the Republican Party and Trump’s role in it were very much a central theme of remarks from Pence, who campaigned for Kemp in Georgia on Monday and is preparing for a possible White House bid.

“When you say yes to Gov. Brian Kemp tomorrow, you will send a deafening message all across America that the Republican Party is the party of the future,” Pence said.