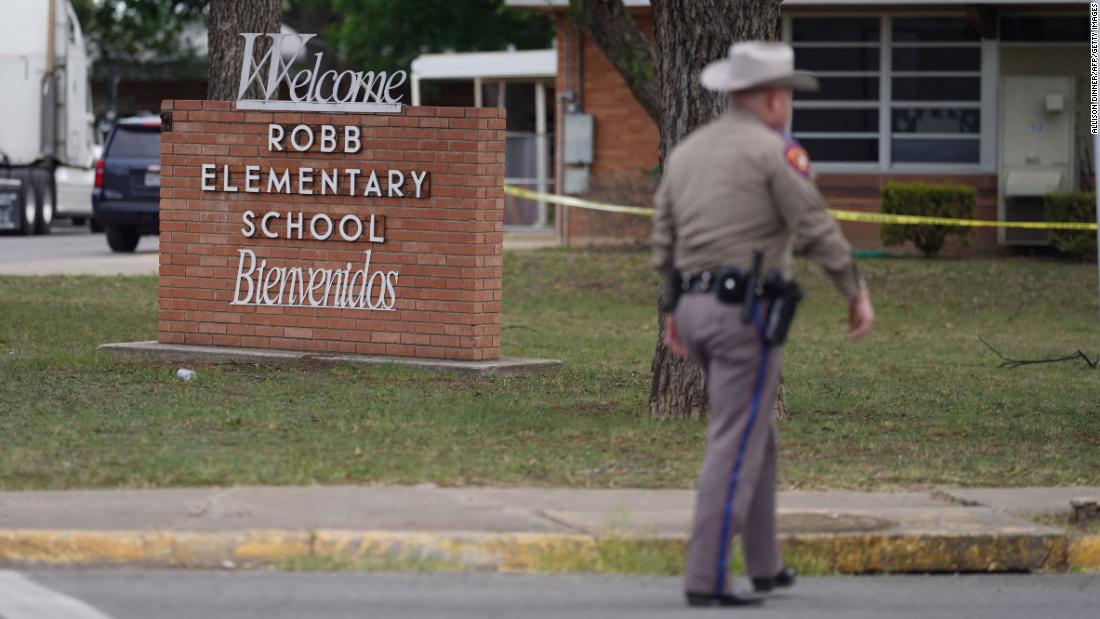 It was a role he has filled too many times. He looked shaken and, at times, angry as he took the podium in the Roosevelt Room accompanied by first lady Jill Biden, who was dressed in black. Biden was vice president at the time of the Sandy Hook massacre and was tasked by former President Barack Obama with leading an effort to find compromise on legislation to address gun violence. Those efforts ultimately failed, a frustration that he referenced on Tuesday.

“I had hoped when I became President I would not have to do this again. Another massacre,” the President said. “Beautiful, innocent, second, third, fourth graders. And how many scores of little children who witnessed what happened — see their friends die as if they’re in a battlefield, for God’s sake. They’ll live with it the rest of their lives.”

“To lose a child, it’s like having a piece of your soul ripped away,” Biden said, touching briefly on the 2015 death of his own son Beau at the age of 46 from cancer, and years earlier, his 13-month-old daughter Naomi, who was killed in 1972 car crash that also took the life of his first wife Neilia.

“As a nation we have to ask when in God’s name we’re going to stand up to the gun lobby,” he said. “We have to act and don’t tell me we can’t have an impact on this carnage.”

Earlier in the evening, Democratic Sen. Chris Murphy of Connecticut delivered the day’s most searing speech from the Senate floor as he challenged his colleagues to break the legislative stalemate.

“Just days after a shooter walked into a grocery store to gun down African American patrons, we have another Sandy Hook on our hands. What are we doing?” Murphy asked his colleagues.

“Our kids are living in fear every single time they set foot in the classroom because they think they’re going to be next. What are we doing? Why do you spend all this time running for the United States Senate? Why do you go through all the hassle of getting this job, of putting yourself in a position of authority, if your answer is that as the slaughter increases, as our kids run for their lives, we do nothing?”

The scenes from Uvalde, a small tight-knit community of about 16,000 people about 80 miles west of San Antonio, were gripping and all too familiar. Shaky cell phone footage captured local residents running toward the school building in disbelief as news of the shooting spread.

Then there were the agonizing afternoon hours when parents were directed to reunite with their children at a local civic center, bracing for news of which students had survived and which weren’t coming home. At least 20 injured victims were being treated at local hospitals. And there were more questions than answers about the suspect, identified as Salvador Ramos, an Uvalde High School student.

Late Tuesday evening, law enforcement was still trying to piece together clues of how the shooting had unfolded and what drove the gunman to open fire on innocent children and adults at Robb Elementary School. Texas Gov. Greg Abbott said that the suspect arrived alone at the school around noon, abandoned his vehicle and went inside.

Sgt. Erick Estrada, of the Texas Department of Public Safety, later described the chaotic series of events that unfolded before the shooting to CNN’s Anderson Cooper during an interview on “AC 360.”

Before setting out on his rampage, Ramos shot his grandmother at her residence, Estrada said. She is in critical condition, he said. The gunman then encountered officers after crashing his car in a ditch near Robb Elementary, emerging with a rifle and a backpack while wearing body armor. It was unclear why the car crash occurred or if the school was even his intended target.

After the crash, he was able to enter through the south door of the school. As the shooting unfolded, he entered several different classrooms, Estrada said, but it was not clear how long that terror ensued before officers took him down.

Two responding officers were struck by rounds, according to Abbott, but were not seriously injured. A US Customs and Border Protection agent, who was among the first officers to arrive on the scene in a town that is not far from the US-Mexico border, was shot in the head, but the bullet did not penetrate, according to an official. About 20 CBP agents came to the scene to assist, some ultimately helping transfer students safely to their families and offering medical assistance, authorities said.

Investigators were also sifting through social media accounts, including an Instagram account tied to the suspect that three days before the incident had posted a story including images of two AR15-style rifles.

A former classmate of the suspect told CNN’s Curt Devine and Jeff Winter that Ramos “would get severely bullied and made fun of a lot” and was sometimes taunted for the clothes he wore and his family’s financial situation. The former classmate, who did not want to be identified, said Ramos “slowly dropped out” and ultimately “barely came to school.”

State Sen. Roland Gutierrez, a Democrat, told CNN’s Erin Burnett in an interview Tuesday evening that the gunman had acquired the two assault weapons when he turned 18, according to a briefing that he was given by the Texas Rangers.

“On his 18th birthday, he bought those two assault rifles,” Gutierrez said. “It’s the first thing he did when he turned 18.”

Sadness and deadlock in Congress

Senate Democrats immediately took steps to try to place a background check bill passed by the US House, known as the Enhanced Background Checks Act of 2021, onto the legislative calendar. But there was no indication that the legislation would get the 10 Republican votes needed for passage.

Democratic Sen. Richard Blumenthal of Connecticut said the bill should get a vote on the floor even if it is likely to fail.

“I think we need to hold every member of Congress accountable and vote so that the public knows where every one of us stand,” he said.

Biden’s speech — which did not outline any clear plan for action on gun legislation — reflected the political reality that he is facing. With inaction the most likely outcome, he chose instead to focus on the anguish of the Texas families.

Biden played a role in passing the 1994 assault weapons ban, which expired in 2004 after lawmakers failed to renew it. His administration has taken some executive actions, including recent policies to crack down on “ghost guns,” but they fall far short of the sweeping actions that both he and many congressional Democrats would like to see.

They are hamstrung, in part, by the filibuster rules in the US Senate that require 60 votes to advance major legislation. West Virginia Sen. Joe Manchin, a Democrat, said he would do “anything I can” to move what he called “common sense” gun legislation forward, but he indicated Tuesday that he is still not willing to eliminate the filibuster to get gun legislation through the Senate.

Rep. Mike Quigley, an Illinois Democrat, offered a grim assessment of how the next few weeks would unfold in a familiar pattern.

“A couple weeks — we’ll go back on the House floor. We’ll have a moment of silence, and we’ll talk about thoughts and prayers,” he told CNN’s Jake Tapper on “The Lead.”

“The Democrat-controlled House has passed gun control legislation, but it will get nowhere in the Senate and nowhere with my colleagues across the aisle. And you and I will be talking about this again, sometime in the next week, two weeks, months or years to come.”