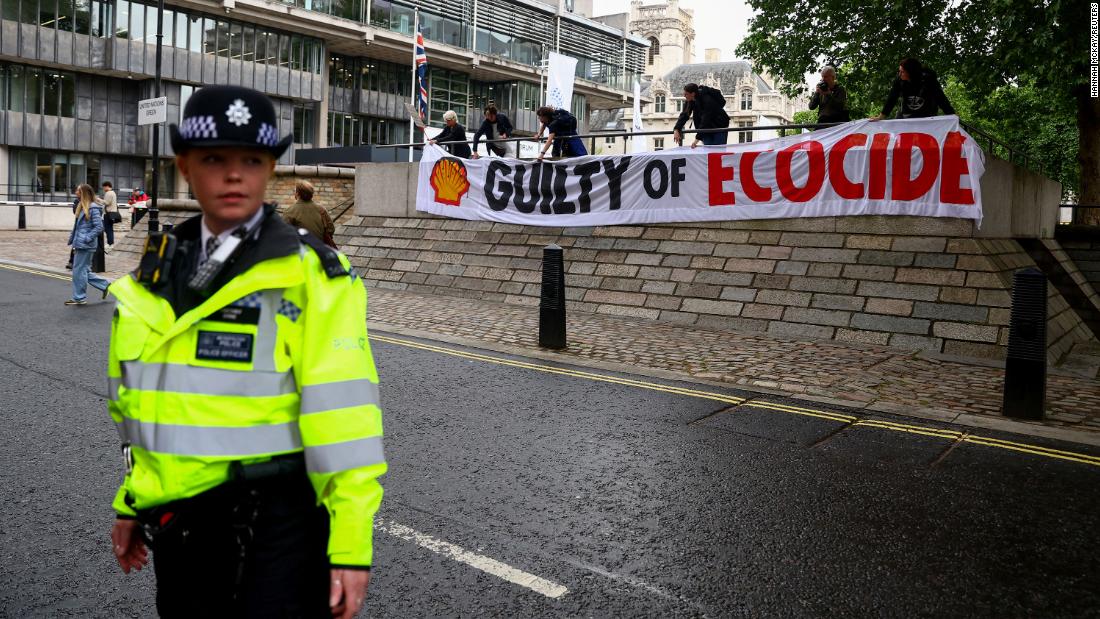 “Can I assume that you do not want me to speak?” Shell chair Andrew Mackenzie asked over chants such as “we will stop you” — sung to the tune of Queen’s “We Will Rock You” — and “Shell must fall”, which delayed the start of proceedings.

Police arrived at the venue in central London but allowed protesters to continue chanting for over an hour after the meeting was supposed to start.

“We’re here to embarrass them and hold them to account,” said Aidan Knox of activists Money Rebellion, which is linked to climate protest group Extinction Rebellion.

Both Mackenzie and Shell Chief Executive Ben van Beurden stayed on the podium, watching the protests stone-faced, even as a screen behind them said the meeting was “temporarily paused” and non-protesting shareholders were asked to leave.

After almost two hours, Mackenzie said police had asked all Shell employees, including board members, to leave the venue. Once they had left, the protesters departed voluntarily with police watching on.

Shell said in a statement: “We respect the right of everyone to express their point of view and welcome any engagement on our strategy and the energy transition which is constructive. However, this kind of disruption … is the opposite of constructive engagement.”.

When the meeting resumed later, shareholders backed Shell’s climate strategy, while a climate activist proposal from the Follow This group received fewer votes than last year.

Shell is coming under increasing pressure to draw up a more radical climate strategy.

In mid-March, environmental lawyers ClientEarth, which is a Shell shareholder, announced they were preparing legal action against the directors of Shell over the company’s climate transition plan.

In what they said would be the first such case of its kind, ClientEarth lawyers said they were seeking to hold the oil and gas company’s 13 directors personally liable for what they consider to be a failure to adequately prepare for the global shift to a low-carbon economy.

They said that the board had failed to adopt and implement a climate strategy that aligns with the 2015 Paris Agreement, claiming that amounts to an alleged breach of the directors’ duties under the UK Companies Act.

In May last year, a court in the Netherlands issued a landmark ruling that Royal Dutch Shell — as it was formerly known — must dramatically reduce its carbon emissions, in a decision that has had consequences for other fossil fuel companies.

The company must slash its CO2 emissions by 45% by 2030 from 2019 levels, according to a judgment from a district court in The Hague. That includes emissions from its own operations and from the energy products it sells.