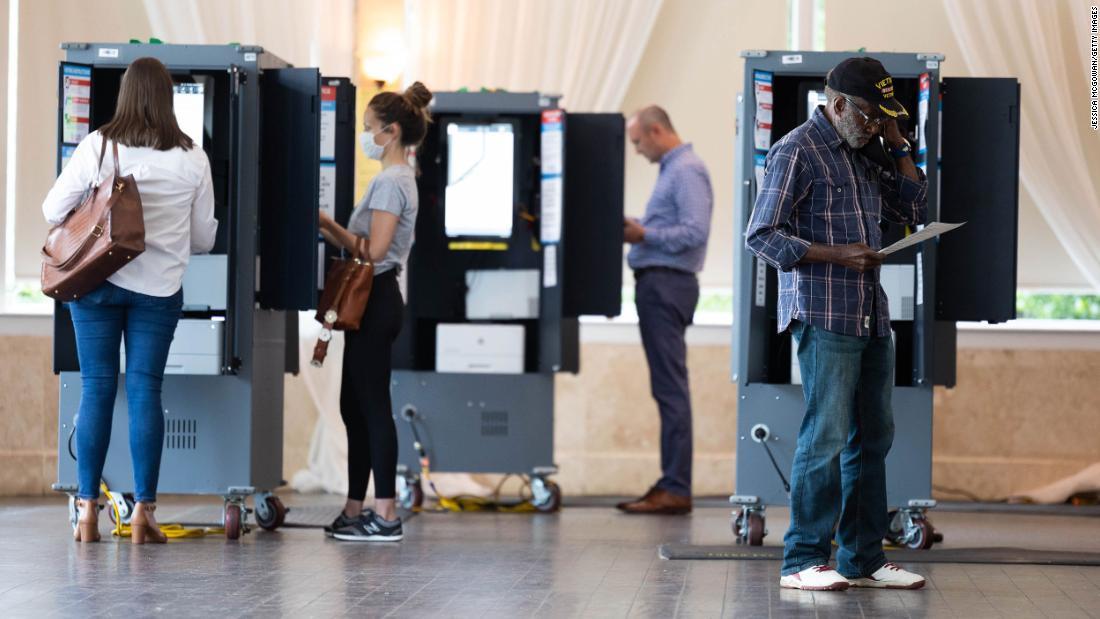 Georgia is just one of five states holding contests on Tuesday, but few races have fostered as much political intrigue as Gov. Brian Kemp’s primary against former Sen. David Perdue, whom Trump recruited to run. Kemp is facing down the former President’s relentless vendetta to punish him for refusing to overturn the 2020 presidential election results — a power Kemp did not hold.

Voters will also decide whether to replace GOP Secretary of State Brad Raffensperger, who, like Kemp rebuffed Trump’s election entreaties, with a Trump-backed candidate in Rep. Jody Hice, who continues to falsely claim that Trump would have won Georgia if the election had been “fair.”

Candidates must receive more than 50% of the vote to avoid a runoff.

Kemp, who looks poised to survive his primary, may have charted a new GOP playbook for candidates burdened by Trump’s grievances. He’s kept Republican voters focused on the conservative policies he has championed: from his early re-opening of Georgia in the midst of the pandemic, to the law he signed restricting mail-in voting, to his backing of a law allowing most Georgians to carry a concealed firearm without a license.
A cavalcade of high-profile current and former GOP governors, including Chris Christie of New Jersey and Pete Ricketts of Nebraska, have vouched for Kemp on the stump. And in that proxy war between Trump and the Republican establishment, former Vice President Mike Pence told Georgians on Monday night that a vote for Kemp would “send a deafening message all across America that the Republican Party is the party of the future.”
It has been more challenging for Raffensperger to disentangle himself from Trump’s obsession with the 2020 election given the infamous call where the former President demanded that the Republican secretary of state “find” enough votes for him to win the state, which is still very much in the news as part of the ongoing Fulton County special grand jury investigation of Trump’s election interference.

The Republican Senate primary is expected to be less dramatic since Trump and the GOP establishment long ago united behind former football star Herschel Walker. As Democratic Sen. Raphael Warnock runs for a full six-year term, Republicans are eying Georgia’s Senate seat as a key pickup in their quest to win control of the Senate.

In another race that could underscore the limits of Trump’s influence, Rep. Mo Brooks is back in contention for a potential runoff in the Republican Senate primary in Alabama, several months after Trump rescinded his endorsement of the congressman.

Brooks is running for the seat being vacated by retiring GOP Sen. Richard Shelby, facing Army veteran Mike Durant and Katie Britt, a former aide to Shelby. The race will proceed to a runoff if no candidate wins more than 50% in the primary.

Though Brooks was once one of Trump’s strongest defenders and voted against certifying the 2020 election results, the former President said he was pulling his endorsement in March because Brooks had urged voters to put them 2020 election behind them.

A win in that race in November would be a homecoming for Sanders, whose father Mike Huckabee spent more than 10 years in that role from 1996 to 2007.

Texas voters cast their ballots in runoff elections on Tuesday amid news of a shooting at an elementary school. Republican Gov. Greg Abbott said 14 students and one teacher were killed.
Among the notable contests in the state, Texas Attorney General Ken Paxton, who filed a failed lawsuit to overturn the 2020 presidential results, is facing a challenge from Texas Land Commissioner George P. Bush, the son of former Florida Gov. Jeb Bush and grandson of former President George H.W. Bush. Bush has argued that Paxton’s extensive legal troubles could complicate the GOP’s ability to hold the seat in November, but Paxton led the field in Texas’ March primary and seems poised for victory.
The most closely watched contest on the Democratic side is the runoff between moderate Texas Rep. Henry Cuellar, the only Democratic congressman who votes against abortion rights in the House, and his progressive challenger Jessica Cisneros in Texas’ 28th Congressional District.
The debate over reproductive rights has intensified in that race since Politico published a draft majority opinion from the Supreme Court that suggested the court is poised to overturn the Roe v. Wade decision guaranteeing the right to an abortion.
Minnesota is holding a special election in the 1st Congressional District, which has been vacant since Rep. Jim Hagedorn died in February. His widow, Jennifer Carnahan, is one of the Republican candidates attempting to replace him.